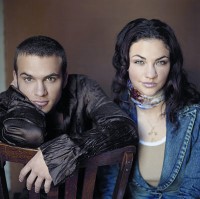 With over 200,000 units sold of their first two albums and many music magazine awards, such as Favourite New Artist (Release), brother and sister duo LaRue are doing well. They've also had some secular success: "Jaded" was the number one video on the Disney channel for several weeks. Just prior to kicking off a UK tour in August, I spoke to Philip LaRue in a backroom of Milton Keynes' Authentic Media. I began by asking the singer how it all began. "When I was 15 I had mononucleosis, a disease that kills the white blood cells in your body, so I got really sick. I couldn't do anything much, so I picked up the guitar. Natalie and I were both home-schooling and as a music project, our Mum suggested that we write a song together. That became 'Picture Frame', which ended up on the debut album, which is really how the ball started to get rolling."

Living in Arizona at the time, LaRue would play at youth groups, coffee shops and anywhere that would listen to them! During this time they met their producer, who insisted that they record a demo. "He sent it to a couple of labels," Philip explained, "but without us knowing! Around this time our family felt God leading us to move to Nashville. I'm from California originally, so when I think of Nashville I think of cowboys, not music. Yet, within a week of moving there we had met up with our producer's label and begun to discuss contracts. About a year later, our first record came out. It was very much a God thing."

The self-titled debut now goes down in CCM as an all time classic including Christian radio hits "Waiting Room", "Reason" and "Someday". "The sudden media attention was overwhelming! At first it was like rolling this ball and you had a good idea about what it was and then, all of a sudden this ball was rolling you and you're trying to catch up with it. There have been some difficulties with our record company, often on how we were marketed; they wanted to portray us as a poppy, polished duo, because that was meant to be popular. This was confusing for us. I remember seeing this "picture-perfect" poster of us on someone's wall, which was totally weird, as that's not how we see ourselves. Our family has been great; they've been really supportive and we've been accountable to them. At 17, with 300 girls screaming your name, wishing they could touch your hair (no more, Philip's now switched to a close shaved look!), it's very strange, so having Dad on hand as a source of wisdom is a great help."

Two albums out and selling well must be good for LaRue. With the third, 'Reaching', soon to be a potential stunner, I wanted to know if they intended to radically alter their well used, but effective, musical style. "This new album is the first time where we were given more creative ability, so the music is quite different. It's still got elements of the guitar-pop sound but it's much more edgy and moody. We got to use our live band on this album and that has been partly responsible for this sound. The first two CDs didn't have that feel of teamwork; they were very independent sounding, but this album has much more of a together, full-on feel." I asked about why they opted for a new producer, Monroe Jones (Chasing Furies, Third Day) on this project. "Because we entered the industry while very young we were looked down upon, by producers and record owners. But now, having been around a little, we have finally had the confidence in who we are and so have been bolder in how we want things to be done. We weren't trying to be rude; it's just that as this was our third album, we wanted to have a greater control on how it sounds. We feel Monroe believes in us and understands where we are coming from. Usually most producers arrive with their own agenda, but he comes with an idea, but doesn't know where it'll end up, giving us a whole lot of freedom. He once said to me that, 'you already hear the music in you head and I just want to help you make that,' which is the first time anyone has ever been so open to our ideas."

'Reaching' is loaded with exciting tracks, "Without You", a concert favourite, being one of them. Philip gave me some background. "It really explores how we're going to fail and fall; that we're a bunch of imperfections walking around trying our best, but without God there is no hope. If I don't have some hope in something greater than me, life would be so monotonous. Without God, I couldn't take another breath without full confidence and hope in him. Up to now we've written all our own songs, but on this new record we've branched out a bit and, just for fun, have co-written a few songs with a couple of producers plus two friends or ours, who don't really know a thing about music and who no one has heard of! When we first got into the music industry we were told how we should do things, what people to try and write with, etc. but Natalie and I just said 'no.' At the time, I think we didn't realise how different that was. I guess we were just teenagers and we didn't know what was routine, but somehow we got away with it!

"A song that stands out for me is 'Trinity'," Philip enthused. "This song talks about the whole mystery of God and the Trinity. I think that our generation has lessened God and placed him in a box, so we feel more comfortable. God is not about feeling comfortable; he's so massive, so huge and so mysterious, yet he's pursuing us daily. We've taken him down from that platform and made him our 'little buddy'; he does want to be our friend, yet he's so much more than that. If we down-grade God then they'll be less passionate Christians and our faith is going to be half full, stopping us from being able to fully reach out to the world. This song reflects my want to try my best to elevate God to the place that he deserves, a place where I'd be happy to admit that I don't have half, not even half-of-a-half, of a clue as to who God is, and yet, I know that he loves me."

It seems that there is a much more central theme to this new album and I probed Philip for the meaning or message of 'Reaching'. "Last year was difficult for us, for a number of reasons. We toured loads promoting 'Transparent', but the big thing was that I was very sick. I went on this mission trip to Venezuela and took the pill, Larium, which I had a huge reaction to mentally. In fact, I almost died from it! It put my family through a lot and it was hard and scary for all of us. But I think God used it to teach me things. The album definitely reflects some of this doubt and fear. There is hope though! There's a song called 'OK To Cry', which talks about how there's going to be times when we need to let go because we are human and frail. As Christians, for some reason we sometimes feel as if we have to obtain perfection; it's like we are trying to be sugar coated and fake, which isn't how Christ was. Jesus turned the tables around, cried with his disciples and was very real and open. Even if you're not a Christian, if you read the words of Christ, just from an objective stand point, I think that you'd see he's a very real person."

Yet there seems to be great things in store for the duo. Philip sat back and looked to the future, "We're getting to a place now that my parents (who have been touring with us) are going to stay at home and we'll take out a road manager, which will be a big change. But I feel that we're ready for that. I'll be 21 when 'Reaching' comes out (Natalie will be 18), so I'll be at a new phase in my life. I feel blessed to work with my sister and we make a good team. It is scary growing up, with a bunch of new responsibilities, but a fantastic experience. What's exciting, and sort of funny too, is that as we're making CDs, people are watching us grow musically, lyrically and in our faith."

It is amazing for me to see a couple of young people who decide to stand out of the crowd and put into words and then give music to their love for God. I just wanted to encourage Natalie and Philip to keep listening to what the Lord whisper to them because I know there's still a lot in store for you guys. Thanks for rejecting the platform and giving it to God, you are an inspiration to me.

For more on LaRue visit the LaRue artist profile