As I Lay Dying: San Diego's hardcore exhorting us to stop focussing on ourselves 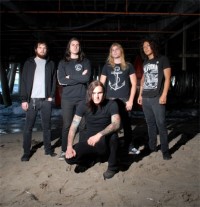 As I Lay Dying

The last time Cross Rhythms reported on San Diego's As I Lay Dying in 2006 the writer observed, with commendable understatement, "They are getting rather big." Since then their Metal Blade album 'An Ocean Between Us' (released in August 2007) has reached number eight in Billboard's mainstream album chart and 'The Powerless Rise' (May 2010) number 10, putting As I Lay Dying - Tim Lambesis (vocals), Nick Hipa (lead guitar), Phil Sgrosse (rhythm guitar), Josh Gilbert (bass) and Jordan Mancino (drums) - up there with Underoath as Christendom's best selling hard music band.

Picking up their story since 2007 one thing that has changed for AILD is that today the band undertake tours like Taste Of Chaos and Sounds Of The Underground where they play alongside bands with virulent anti-Christian views. For instance, they've shared a room and played frequently with Polish black metal band Behemoth. Tim Lambesis told truepunk.com, "Originally we were a little bit intimidated because Behemoth is very outspoken about how much they hate Christians, but I would consider those guys friends of ours. Their view of us as Christians is much different to that of Christians in, say, Florida who are maybe more forceful. It was an eye-opening experience for us and them to meet and sit down and talk." And talk they did. "As Christians we believe in the Bible and we believe very strongly and our faith is very important to us. Behemoth describe Christians as very judgmental and I can relate to why they would be so hated because judging other people is not something we're supposed to be doing. If you really follow the teachings of Jesus it's all about love and forgiveness."

In 2009 As I Lay Dying released the DVD 'This Is Who We Are'. Nick Hippa spoke to metalsucks.net about the project. "It's three discs: it's a biography, the second disc is a performance, and the third is random content and all our videos. For me I feel it kind of sums up everything that has happened to the band and everything that the band has done up until this point. I feel that that was the last thing that we needed to put out to kind of close that chapter of the band. It feels like it is all moving forward from here."

Hipa was greatly impressed with the work of documentary director Denise Korycki. "She's been a friend of the band since 2003. She has been traveling with the band since then. She's had tour after tour of footage of hanging out on our bus and videotaping us. We were friends with her in the beginning just because she is cool, but over those years she's just like part of the family. We're always used to having Denise out with us."

Hipa told metalsucks.com that the writing process was going on in earnest on the tour bus. "We've already kind of been riffing out and demo-ing on our own. Just getting ideas together and making little deposits in the riff bank. When we're done with this tour we're going to get together and start working on a lot of the ideas that everyone has. I have several riffs that are in somewhat of a structure with drums and someone else will come into practise and be like, 'Hey check this out.' We'll all listen to it and get a vibe of where that's going. Everyone kind of takes it apart and adds to that. So it's a very democratic process. It's become that way over the past because our singer Tim and our drummer Jordan were responsible for all of the music. Then our other guitar player Phil and I joined the album previous to this one which is 'Shadows Are Security', and we were still working out our communication and writing music together. The last album everyone was completely involved. It's pretty interesting because the band keeps on changing. We have a new member for this album. So I'm interested to see how it works with him. It always starts with somebody kind of having a vision of where they want the song to go."

The "new member" to whom Hipa referred was bass player Josh Gilbert who joined the band in 2007. As I Lay Dying's 'The Powerless Rise' was produced by Adam D from Killswitch Engage who also produced 2007's 'An Ocean Between Us'. Josh Gilbert told distortednews.com, "It's not every day you find a metal producer that also plays guitar, bass, drums, can sing and also runs a mean Pro Tools session! He definitely helps us focus our vision and trim the fat on songs. It also helps having a really positive, friendly vibe going on while you record."

Josh is proud of 'The Powerless Rise'. "As most bands would say, it's a big step up from our previous album. A few of these songs are the heaviest songs AILD has ever written. We definitely spent a lot of time layering and tinkering with textures on this record than ever before, and I think it will come across as a much more complex and well thought out record."

Josh is only too aware that much metalcore has become stylistically moribund, endlessly copying itself. "The computerized blastbeats have become faster. The tunings have become lower. The breakdowns have become heavier. It's like, there's no way to get heavier than a breakdown in drop 'z' or whatever some of these bands are tuning to these days. So I think the bands that will make it are the ones that can take the redeemable qualities from the genre and make it fresh and interesting."

There are some simple but impacting lyrics on 'The Powerless Rise'. Phil Sgrosso spoke to HM magazine, "Most of our problems are solved when we stop focussing on ourselves. It's a general theme to the album, but closely connected. The theme to the song 'Without Conclusion' is how there isn't enough we can gain to bring fulfilment, so there's no end in sight. Our hope should be in making the simple moments of everyday life fulfilling. If reaching a point of prestige or success is a point at which people will be happy, then we are destined to a joyless life, because our entire lifetime should be enjoyed regardless of our circumstance. That one's really cool, because with certain things on this record that Tim tied in lyrically is how he felt when he first listened to the song. He noticed that the chorus didn't have a conclusion and it didn't really seem like a chorus to him. He kinda viewed it as another part and it was like, 'Well, there's no other idea we have for a chorus, so it is a chorus now.' He felt like it wasn't very conclusive, so with that mentality, 'Oh, without conclusion, we can relate that to living life.' It gets you in closer to a reaction with the song."