Audacity: Midlands band striving to be Salt and Light

One band who won't have to travel far for the Roots And Branches festival are Dudley-based AUDACITY. They spoke to Tony Cummings. 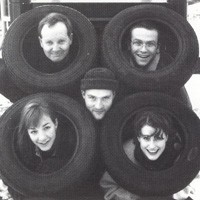 Seasoned aficionados of British CCM will tell you that the Dudley-based evangelistic organisation the Saltmine Trust has been a major player in the growth of Christian music down the years. Its co-founder Dave Pope has, through his pioneering praise and worship ministry via Spring Harvest's Big Top, been a high profile figure while Saltmine's long time house band was eventually to evolve into today's jazz funksters Beehive. Now another band has emerged from under Saltmine's wing and like the earlier era's Saltmine Band, the five piece known as Audacity seem destined to become a major force in British Christian music.

The band have appeared on the last two live worship Spring Harvest albums. And now Audacity's first recording in their own right, an excellent four-song tape 'Power', has just been released. It shows a band able to compose nimbly crafted pop gospel songs, a lead vocalist Lynne Fray with an easy-on-the-ear voice crying out for radio exposure; and a gritty determination to minister Jesus throughout the highways and byways of Britain. In fact, I caught up with them soon after they'd endured a five-hour drive from the Midlands to Devon on route for an event in Tiverton. I begin by asking the band's leader, bass player and vocalist Steve Best, to fill me in on Audacity's history. "The old Saltmine Band became Beehive around '92 and '93. For a while Saltmine didn't have a band. Then in 1996 Jonathan Painter, the worship leader and musical coordinator for Saltmine, felt there was a need to start a new band, one that could reach young people. So he started one."

Gradually Audacity's personnel and its sound evolved, so that by '97 it had arrived at its current line up: Steve Best (bass), Lynne Fray (lead vocals), Calvin Hollingworth (guitar), Rachel Taylor (keyboards) and Dan Wimpress (drums). Pigeon holing Audacity's style is somewhat difficult. Remembers Steve, "We played this gig at The Feast in Stafford and this bunch of lads had come along expecting to see the World Wide Message Tribe. Instead, we were there! Now obviously we weren't a dance band. They asked us what kind of music we were. We said to them, 'Tell you what, you catch our set and then come back and tell us what style we are!' After the gig they came back and told us we were the coolest band in ages but as for our style...they couldn't describe it! Let's just say we're AOR or pop rock."

One of the influences in Audacity's still emerging musical brew is jazz funk. Says drummer Dan Wimpress, "My background is acid jazz so I suppose I've brought a funky edge to the proceedings."

Much of the material for the band is written by guitarist Calvin Hollingworth (who'd previously worked with East West and Painted Orange) and keyboard player Rachel Taylor. Rachel, who describes herself as a "laughy kind of person", speaks about the composing/arranging process. "Calvin and I, being the chordal basis of the group, get to work on the bare bones of the song. It's exciting seeing the material take shape."

Despite the thrill of the creative process, and like all the band she's excited by the enthusiastic response the band has been receiving, her focus is first and foremost on ministry. "You really have to believe that this is work God has called you to. It can be very tiring on the road. It's not all encouragements. But they sometimes happen. Like recently we got a letter from someone in Newbury, who wasn't a Christian, who'd come to one of our concerts. It said they'd got our tape that they enjoyed very much. Then almost as a PS they said, 'I really want to know more about the Christian faith.' Letters like that make it all worthwhile."

Audacity have so far had their biggest exposure on the platform at the last two Spring Harvests. "Versatility is very important for a band like Audacity," comments Steve. "We have to be able to adapt to any audience and any style. Like when we played Spring Harvest this year we accompanied Don Moen doing a country and western praise song! But really the Lord seems to be leading us more and more to the university and pub audiences. We still play schools, we had excellent response at schools in Teignmouth and Bath recently, but our vision is more for the 16 to 35 year olds."

Steve is pleased that Audacity is making a return visit to Roots And Branches festival. "What's exciting about it is that God is opening up something in the Dudley area. We hope to bring some folk over from a church in Walsall that we've had contact with. We're in the process of evolving a whole new set. We're 80 per cent there at the moment to our ultimate set of songs, what we jokingly call our Wembley Set."

Considering Audacity's undeniable quality and the recent events at the Champion Of The World event one wonders if their jokey set name doesn't have an element of the prophetic.

For more on Audacity visit the Audacity artist profile