For their legion of fans August Burns Red - the metalcore band from Manheim, Pennsylvania - not only produced their most brutally exciting album with last year's live CD/DVD set 'Home', but the accompanying DVD is a real insight into the band's past and present. Much of the 'Home' DVD was filmed while August Burns Red were on tour across the world. The band's frontman Jake Luhrs told HM magazine, "The DVD is a great documentary on who we are and what it's like to be in the shoes of August Burns Red. It's bittersweet at times, but a true blessing from God. I thank him every day for what he has blessed me with. All of my bandmates, all of the fans, all of the amazing places and having him with me through all of this has and will always be an amazing season that will never be forgotten."

ABR have clocked up a huge amount of gigs since their formation in 2002. Jake admitted that life on the road has its downside. "I love it, but there are lots of ups and downs. I hope our fans realise it's not always easy being shoulder to shoulder with the same group of people for, you know, seven or eight weeks at a time, but it's a part of the job. Thankfully we're really blessed, because we're all best friends and we know what works for who and what doesn't work for who, and to seriously have that understanding is really important in a band. I just want our fans to know it's not always easy. But it's always worth it."

August Burns Red were formed in March 2002 in Lancaster, Pennsylvania. Guitarist Brent Rambler told drivenfaroff.com how August Burns Red got their unusual name. "Right before he joined the band Jon Hershey, who was also our vocalist at the time, was dating this girl named August. The relationship got a bit out of hand and he really wanted to end it. So he ended the relationship and instead of getting just sad about it, she got really, really, really angry. At the time Jon had a dog named Redd, it was an Irish setter and it had red fur and everything. So she got really mad, went up to his house, and burned his dog Redd alive, in his dog house. And the name and everything comes from, because the next day, the headlines in the newspaper in the local news was 'August Burns Redd' and then we just kind of went with it. It really affected Jon, so when we were picking a band name, that was one that stuck in his head, so he decided to use it. So our name doesn't mean nothing, it just had a really weird and kind of gross meaning."

The band recorded their first EP 'Looks Fragile After All' for CI Records and after a year of playing shows and sporting a new vocalist, Josh McManness, ABR signed with Tooth & Nail/Solid State. In November 2005 Solid State released their full length debut 'Thrill Seeker'. With its heavy breakdowns and odd-meter riffs it immediately connected with the metalcore cognoscente. At the time of its release guitarist JB Brubaker told fourteeng.net, "We wanted to prove that we were no longer the band people knew from our 'Looks Fragile After All' EP. We changed a lot since then. I don't even think we sound like the same band, but regardless, we wanted people to hear 'Thrill Seeker' and think 'these dudes are young but they sound like they've been at it for years.' We just wanted to make the best record we were capable of the time. I'm sure our standards will rise for the next one, but for now, we're very happy with 'Thrill Seeker'. Whether or not we accomplished what I just mentioned above, I guess time will tell. Our singer Josh came up with the title. It was actually the original title for the song 'Your Little Suburbia Is In Ruins' but we decided we didn't want a title track on the album so we changed the name of the song. A thrill seeker is someone who isn't content with the daily routine of everyday living. They're optimistic and determined."

The band's second album, 'Messengers', was released in June 2007 and featured vocalist Jake Luhrs. It peaked at number 81 in Billboard's mainstream album chart and like its predecessor it got enthusiastic reviews with the final epic track "Redemption" getting special accolades. Michael Roberts wrote, "Both the melodic guitar work and the genuinely brutal vocals add an intriguing atmosphere as do the quick guitar licks over a blast beat. The track shifts through a ridiculous number of sections and features countless riffs. It eventually comes to a slower pace before slowly building up to an extremely emotional passage with Jake screaming "Lord, show me the way, as I give myself to you/Never let me go/Hold me with your everlasting love/Be my strength/ Be my voice/Be my glory/Set me free". The passage is just so incredible and is an absolutely perfect moment to end the record on." 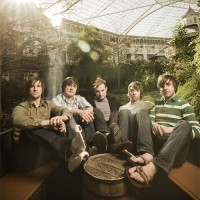 With the band's lineup now settled at Luhrs (lead vocal), JB Brubaker, Brent Rambler (guitars), Dustin Davidson (guitar) and Matt Greiner (drums) ABR toured tirelessly across North America and Europe. After the tours the group cut two intriguing covers, an instrumental rendition of "Carol Of The Bells" for the 'X Christmas' compilation album (which was used in trailers for the movie The Spirit) and, even more unlikely, a cover of Britney Spears' "Baby One More Time" for the 'Punk Goes Pop 2' compilation.

In February 2009 the band released an EP of material not included on the 'Messengers' album, 'Lost Messengers: The Outtakes'. Then in the summer of 2009 came the release of 'Constellations'. Again, it connected with the metal/hardcore audience so that even a rather jaded review suggesting that "'Constellations' doesn't necessarily re-invent and revive the decaying genre of metalcore, but it certainly gives it hope."

In November and December 2009 August Burns Red toured with Underoath and Emery. Then in September 2010 the band released their first live CD/DVD. Said JB Brubaker, "We wanted something for the fans while they wait for our new record to come out next summer. We chose 'Home' - we actually kicked around so many different titles for this - but we chose 'Home' because that's exactly what it is. We filmed the DVD in a gymnasium because the local venue wasn't quite big enough - In a gymnasium, at home, in Manheim, which is where we're from - and they probably have, at most if they have a concert a year somewhere in Manheim, it just doesn't happen. So we really wanted to do it here, and bring the kids to where we're from. And that was kind of the whole point - just to show where we're from, and just be excited that we were home and able to do this. We kicked around so many ideas, and then finally someone was just like, 'Why don't we just call it "Home?"' And we were like, 'Alright! Sounds good.'"

Brent Rambler spoke to lushbeat.com about the huge changes in Christian attitudes towards heavy music. "10 years ago as far as Christians go it was unacceptable to listen to any kind of heavy music. I mean, Christianity as a religion dominates a vast majority of America, so I just think that due to the fact that a large population follows Christianity it was only a matter of time before there were a bunch of kids who were like, 'You know what? I like this music, too.' And so they just started listening to it. People got a little bit more contemporary as far as Christianity goes, and a little bit more open-minded, I guess, and they realised that just because it's 'loud' and just because it's 'screaming' that it's not 'Satanic', so they can put up with it. That's what kind of brought the rise. Then, when I was growing up, any band that was a Christian band that was playing heavy music - I mean, I didn't listen to Christian music at all when I was growing up because it was lame, you know? It was stupid - it was Christian artists ripping off secular artists just to make their songs popular.

"So, I just think as Christianity in general became more open-minded, it left more of an open playing field for young kids who were Christian but also liked heavy music to now make heavy music and actually be good at it. I think it just took time for everything to kind of progress, for Christianity to finally catch up to where the music world was, and then for those Christians to actually gain the musical and songwriting ability to make the music that they were producing good."

Brent is clear that August Burns Red straddle the perceived division between ministry and mainstream bands. "We know that if our lyrics and our content are super, super faith-based that we're going to push away a huge crowd. That's why we've always tried to do a big straddle between the secular crowd and the Christian crowd. Because we know that yes, we can push away the secular crowd, and yes, we can push away the Christian crowd, too. So we kind of walk a fine line - and that's why, as far as lyrical content, it's always been we will write about whatever, but as long as it's positive and as long as it has some kind of message behind it we'll write about it, whether it be Christian-based or not, we'll write about it. So, that's where I think the kids who aren't in to any kind of religion can latch on. Just because, when you read our lyrics, the first thing that comes to mind for a lot of people isn't Christianity. I think that they can accept the fact that, 'Yeah, I like this music and they aren't shoving a belief down my throat.'"