August Rain: A Georgia-based band getting an unexpected US radio hit 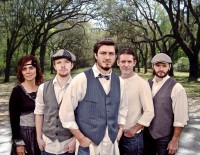 In the US one of the most disappointing aspects of Christian radio is the reluctance of radio stations to give any airplay to independent releases. So the fact that America's most influential chain of Christian radio stations K-LOVE gave major exposure to an independent band from Atlanta, Georgia, August Rain is of considerable significance. In 2012 K-LOVE were giving plenty of plays to the band's song "Show Me Your Light" and now another single, "iLove", is getting the same treatment.

August Rain came about as a result of leading worship in their local church in 2007 and crafting original worship music with a few early song collaborations started by Frank Bowen (percussionist), joined by fellow musicians Denise Bowen (keyboards and background vocals), John Griswell (guitar/banjo and background vocals), Erich Janzen (bass, keyboards and vocals) and front man, Matthew Janzen (lead vocals, acoustic and bass). The name "August" is due to an original song first performed in the month of August and "Rain" simply because a Georgia drought at the time kept the need for rain on the minds of everyone. Said Matthew, "Obviously we needed physical rain, but we looked at rain spiritually as well 'cause we all have times in our life when we have drought and need God to send us rain."

The band recorded two independent albums, 'August Rain' followed by 'Time'. The song "Let It Rain" had become a mainstay of the band's set and was even featured on both albums! Matthew told JesusFreakHideout about the origins of the song. "Frank called me up - I was sitting in my home and I actually had my guitar out; I had just got through singing some songs with the children that morning. He called me and he was frantic. He said, 'I've got some lyrics I want you to put music to, and I think this is going to be a great song,' and so he brought me the lyrics over that day. I had been working on some notes, without lyrics, so I put the lyrics he gave me with the notes I had been working on, and put that song together. Of course it talks about the obstacles of everyday life - what we all go through - pressure, stress - it's real, everybody has it. And you know all the spiritual references to rain in the Scriptures - that's really what the song's focused on. Everywhere we play that song - it's very simple, anybody can learn how to play it and sing it - but everywhere we play that, people fall in love with it. I think it's because it resonates with what people actually experience. And we made the words. . . a lot of times lyrics have a hidden meaning, and that's cool, we do that sometimes, but this one is more like right out there, nothing hidden. 'This is how it is,' and I think that's probably why people can relate to the song so well. We've had people actually tell us on that song and others, 'Thank you for being straightforward with the words,' and you just know it's exactly what is going on in their lives."

It was the K-LOVE exposure of "Show Me Your Light" which took August Rain to the next level. Matthew admitted he didn't know precisely how the mighty radio chain came to pick up on a humble independent release. He surmised, "All I can tell you is [it was] through people like Ginger (Kendall Artist Agency) and Kris with Shamrock Media Group. . . It just so happened that there was a ton of songs, I think like 200 songs, that were up to be [auditioned for the radio station] and they picked three. I think they picked a song from MercyMe, a song from Newsboys, and a song from August Rain! Who's ever heard of August Rain? So we were one of three that got chosen and I guess it was because it's so catchy. That's one of the things about 'Show Me Your Light'. Everybody that's tweeted us or Facebooked us or sent us an email, they always say when 'Show Me Your Light' would come on K-LOVE it was refreshing because it sounded like something they've never heard on Christian radio [Yes!]. I think one of the blessings that our heavenly Father has given us is that we write a lot of Christian music that is out of the box and when people hear it, it's like 'Who is that?' People ask us what kind of genre our music is, and I just tell them I don't have a clue - it's Christian - but I don't know what to call it."

Both their "Show Me Your Light" and "iLove" radio hits were issued in the US on 29th June on the EP 'Sanctuary'. Matthew spoke about the inspiration behind "iLove". "Well, this is my favourite release yet. I, we, have regular family worship times in my home. I'm a husband and a father of five children. We homeschool the children and there was a time one morning I was teaching them and I made a few comments and statements to them, and after we were through and had prayed, I felt like I had steered my children in the direction of looking to me rather than looking to Christ. And I repented of that. And what happens in our lives, in my life - I'm not just pointing this at everybody else - is that we get to a point that we're doing things and we're being blessed, let's say financially or musically or we manage a business or we own a company. We start thinking that WE'RE the reason that we're being blessed, or WE'RE the reason that all this is happening to us, when in reality it's God. There's a text in Deuteronomy that says when we prosper and we have good things happen to us, we are not to forget that it is the Father in Heaven that gives us the ability to do everything. The first verse of this song says, 'I can make it all sound beautiful even when I don't feel you inside' - and that's the problem that we have. So what we need is to be reminded - and the Lord has a great way of reminding us. I love the way he does it. That's where the title of the song comes from. There's a text in 1 John Chapter 4 towards the end that says we love him because he first loved us. Here, in his love, not that we loved him but that he loved us. So I love the way that He reminds me of that - He puts me in check, it's not me, it's Him. He gives me my abilities. Yeah, I'm a father to my children but I have to point my children to the perfect example of Christ because dad's not always going to be perfect and I'm not gonna be perfect any day.

"The second verse of that song - you know how we drive down the road and we see these neat little church signs that have a lot of times good sayings, a lot of times corny sayings, and sometimes non-scriptural sayings? But anyhow. . . We see these signs and as we wrote the second verse of that song, I thought about getting in my car and riding down the road and that a perfect church sign to see would be, 'Do you know why you're in love with him?' And underneath it, the Scripture 'You love him because he first loved you.' And so, he'll never leave us, he'll never forsake us, we're his children. Yeah, he disciplines us, but praise the Lord that we get disciplined because Hebrews says, if we're without discipline then we are fatherless. So that's what the song's all about. And I am extremely excited, or as my children say, stoked to have this single come out. Man, I just hope to goodness it ministers to people."

gday guys are u the group with a song being played on life fm in sth.aus.if so were can i buy it?

I have personally had the opportunity to meet both Frank and Matthew, and have heard the band live. I also feel that they are two of the most humble brothers I know. Matthew is probably the best ministers, pastor and teacher of the word that I know. It's definitely a blessing to hear him preach.