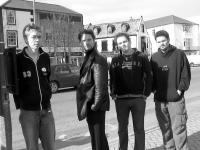 Tony: Visitors to the Cross Rhythms festival might well remember Blade. Give us a brief lowdown on V12.

Daniel: I formed band Blade in August 2000 and in November of that year we released the EP 'Sword Of The Spirit'. Our next release, the EP 'Stand Forever', came out in May 2001 but then we disbanded the next month. Two months later I formed a new band, V12. We've recently released an EP called 'Transitions'.

Tony: Your new recording seems a step up in terms of anything you've done previously. Tell me about the sessions.

Daniel: We felt that the band was at that point where a professional recording was needed; a friend in London suggested we contact Sawmills Studios in Fowey Cornwall, who gave us a great deal. They are one of the most prestigious studios in the UK where bands such as Oasis, Feeder, Muse, Supergrass, etc have all recorded. We were also very blessed to have Mark Thomas produce the EP for us, as he has worked alongside Muse for their last two albums. He did a great job and we ended up with a excellent recording, a real professional product. The sessions all went according to plan. It was a great experience for us all, we learnt a lot.

Daniel: My two favourite songs have to be "Disconnected" and "Star", firstly because "Disconnected" is so different from what we have done before, (it has shocked some people!), but it is a very original sound, and "Star" has it all, great riffs (Chilli Pepperesque) and gripping melody, I predict it to be a radio hit!

Tony: It's hard to sustain enthusiasm in such an under-financed realm as British Christian music. What keeps the band going?

Daniel: After standing and pioneering a Church for eight years, God gave us a word (Isaiah 42:9) about the "former things" having come to pass and new things being declared, and he says, "Before they spring forth I will tell you of them." I really felt in my spirit that the band was the one of the things "springing forth", and that is just how it has been. V12 have only been going since August 2001, since then amazing things have been happening, with two TV appearances, festivals, events, schools, Poll winners, a base in California, etc to name but a few! So we are standing on his Word, this keeps our faith levels up and our vision "alive"!

Tony: What future plans to you have?

Daniel: We feel that we have been called for an evangelistic mission to the lost and therefore to change over from the Christian "saved" scene to the mainstream "unsaved" scene, hence the title and theme of our new EP 'Transitions'. We are in a transitional, changing over period at the moment; this is not a sell out or compromise of our faith, but just a change of direction we believe God wants. At present Taste Media are looking into V12, this is the mainstream label of Muse; US radio stations are looking to play tracks off the new EP, starting off in Los Angeles, so we just keep praying for God's direction.

For more on V12 visit the V12 artist profile