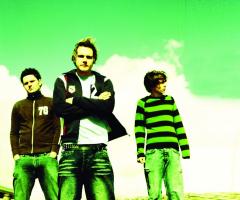 It's only occasionally that Cross Rhythms gets the opportunity to chronicle a band from its humblest beginnings and see it develop, down the years, to the point where the Big Time beckons. But that is what has happened with V12 who since their inception, in the West Country, in 2001 have made giant strides. Now with record companies showing a definite interest and a diary of engagements which will take them all over the UK and overseas this group of gutsy rock evangelists seem likely to dent the mainstream without ever letting go of their vision to communicate a powerful spiritual message. In a rather stifling side room of the Cross Rhythms offices I spoke at length to two of the group's members, vocalist, guitarist Daniel Wilcock and drummer Nigel Smith. I began by asking about the band's blistering new three-song EP "Blinded". What was the lyric of the title track saying?

Said Daniel, "It's just like it says really, a song about being blinded by the Devil and his plans and just not seeing the light and walking through your life with your eyes shut. It's telling people they need the realisation of faith and truth and actually seeing God and how they've been lied to all their life. It's talking about the Devil whispering into your ears about things that hold you away from the truth and your salvation."

Knowing the band's recent exposure in the mainstream - they came second in the recent Rock Idol Battle Of The Bands contest held at Imperial College and have played several high profile London clubs - a lyric like "Blinded" might seem a tad confrontational. "I think the way I've tried to create it is with lyrics that are not blatantly obvious," continued Daniel. "So we didn't name Jesus and the song can be taken in two ways. But obviously the Christian audience would know what it means but it's something that non-Christians would think about. It's not blatantly obvious to the point that people wouldn't listen to it because it's obviously Christian."

Of the songs on the EP Nigel's favourite is "Everything". "It's basically a declaration of everything we are to God, and everything God is to us. It's a real mosher! It's great to play and I'm hitting the drums even harder than ever." 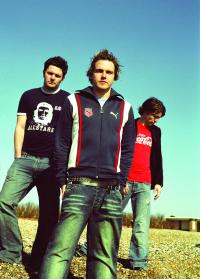 The band's previous outing was the EP release of 2002 'Transitions'. It got major radio play on Cross Rhythms with "All Of Me To You" and "Star" becoming turntable hits and even got a review in NME's Demo column. Recalled Daniel ruefully, "I think what they called us was a funky version of Creed maybe because they noticed the Christian undertones to it. They called us the Red Hot Corn Peppers which is quite funny. But these new songs are totally different to 'Transitions'. It's a different thing, we've just moved on to a different level." Pivotal in helping V12 find their creative focus on "Blinded" was producer Pete Brown who working with them at Lincoln's Chapel Studios have given them a much more radio-friendly sound while retaining their edgy, hard rock-tinged sound. Though the band are making inroads into the mainstream - and the group are optimistic that the stunning "Blinded" single could open doors and obtain them that sought-for mainstream record deal, the group have retained their strong spiritual focus. Said Daniel, "We pray before each gig that it touches hearts and minds of people. That's the key thing for us in playing, for the lyrics and the anointing to carry through to touch hearts."

V12 are seeing spiritual fruit from their uncompromising approach. Remembered Daniel, "On one particular occasion when we were doing a school's tour in High Wycombe there was one email that we received from a girl that said, 'I never really had a thought about God before, I never thought about the whole spiritual issue. But just listening to the music and how relevant it is and how your lyrics go hand in hand with my life and my experiences, I can really look to God as someone who is real and who can help me through all the struggles that I have.' That was just amazing to hear. The youth are living in a society nowadays where there is such a big moral decline and they don't know the difference anymore. There are no set rules. It is so important and for us to input those morals and for them to find God and to live by that lifestyle."

V12 are very conscious of the tension between having a heart for full blooded ministry and working, a lot of the time at least, in the mainstream music arena. Said Daniel, "I think we are definitely an evangelistic band but also a band that Christians can embrace too. We don't shove the message down people's throats. We just sing the lyrics and then those in the audience who like us find out about us."Â

The history of the V12 is somewhat complicated. Explained Daniel, "Jamie, our bass player, and I originally come from North Devon along the seaside surf coast - very nice place to be. Nigel, our drummer, has always been in High Wycombe since he left Nexus Christian Music College - plug - and he just felt he wanted to be part of the band. So he travelled down every weekend to North Devon to do the practices. Nigel is very committed and obviously God spoke to him, or he's crazy! We had a guitarist but then he had a wife and started to have lovely little kids. Then we felt we needed to move to somewhere where the gigs were and so I moved up to London and Jamie went to Imperial College London.Â  Nigel stayed in High Wycombe so it paid off for him in the end, not moving down!" At the moment the band are still looking for a permanent guitarist to complete their line up with their original axeman helping them to fulfil gigs of which there are more and more. 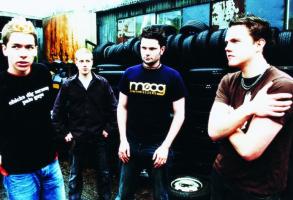 "At the end of March we'll be going over to Holland to play a spring festival not far from Amsterdam," explained Daniel. "While we're there we are going to talk to promoters about how we're going to promote the CD over there. There are also things lined up in Sweden and Germany. In the UK it's been confirmed that we are playing Greenbelt Stage One but we're looking to going to Glastonbury as well."

One of the most exciting gigs so far for V12 was their appearance at London's Rock Idol Battle Of The Bands. New boy drummer Nigel was thrown in the deep end, as he ruefully recalled. "The whole thing did happen very quickly. The guys got through to the final after a very spur-of-the-moment heat, you could say, when they played a show at the Garage. That was before I joined. Then pretty much they came off stage and found out about the semi final. Then the guys went over to Imperial College and got through to the final. It all happened very quickly. So it wasn't really nerve wracking, it was fun. I really enjoyed it."

Anyone who catches the live set will soon learn how much the band have progressed since their early days. "We're just continuing to work on new material. Things have slowed down a little bit while we look for a permanent new guitarist. Obviously each member of the band is vitally important to our style and progression. But we've written one new track so that takes our new material to four! We've got a long way to go obviously before the album everyone is asking us about is ready but when the right record deal comes along I'm sure we will be ready."

For more on V12 visit the V12 artist profile