B-Fade: The rapping ex-convict proclaiming All Things Are Possible 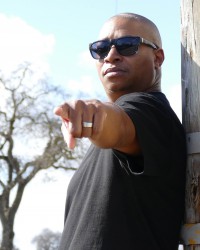 Andre Woods' upbringing was hard. Born in Bronx, New York and raised in Oakland, California, Andre was sucked into first using and then selling drugs. Much influenced by gangsta rap his life became a downward spiral of drug use, sexual promiscuity and gang-related violence. In 2002 Andre met with the living God and was soon rapping under the name B-Fade, an acronym standing for Be Faithful And Dedicated Everyday. Over the next few years the emcee's rapping skills developed as he worked alongside such diverse music ministry figures as Blanca (from Group 1 Crew), Kiera Sheard and Lincoln Brewster while a 2009 album 'B-Fade Presents: Sactown, The Bay Area & Backdown' showed him to be a master of West Coast flows. B-Fade's first national release for Trendency Records, 'All Things Are Possible' has pulled together such well-known guest collaborators as V-Rose, Black Knight, Spec, Keno Camp and R-Swift. I spoke to B-Fade on a hot day in Oakland.

Tony: Was there any overall message that you wanted to get across on this album?

B-Fade: The overall theme of the album is all things are possible. I want to encourage people. A lot of people think that some things are impossible or that they can't be delivered from depression, sickness in the body, any situation that somebody may be going through. I want people to know that all things are possible with God. If you put your trust in him, you can achieve things that you are bound by at the time.

Tony: That's kind of tied up with your own personal life, isn't it? You personally have been delivered from a very, very negative lifestyle.

B-Fade: Yes. I'm delivered from the street life. I was one of those young guys that got influenced by the secular culture, and it really just rocked my life. It turned me upside down. It ultimately led me into drugs and a lot of partying and riotous living and God had to come and deliver me from that and I had to believe that all things were possible myself, like you said, in order for God to work in my life.

B-Fade: Well, it's most definitely in a negative way because a lot of people grow up without a father in the home, without somebody to show them the correct way so they look up to the secular rapper or the actor as a role model but in actuality we're just mimicking the negativity that they bring to the table. Some people want to be like that person and then that might not necessarily be a positive influence in their lives. So it's most definitely impacting and music draws on your emotions as well so certain secular artists can tap into things that you're going through and have you react in a way that God wouldn't want you to. I was a product of that very situation.

Tony: Listening to mainstream hip-hop which is on the radio today, is that difficult for you? Does it fill you with annoyance or anger or disappointment? What's your response to all that?

B-Fade: It does, in a way, make me slightly angry because we have to deal in society with the results of our youth listening to that stuff. When we go into prisons or juvenile halls and we talk to some of these kids some of them will tell you that the music makes them do it. They mimic everything that's in the music and it does make me angry because a lot of these artists that I even know personally, they don't live that lifestyle. They go in a studio and they rap about all this stuff and they go home at six o'clock, like a normal job and kiss their wife and won't let their kids listen to their own songs but they'll push it out into the community. And it does do damage.

Tony: They're rapping about guns and mistreating women and things like that simply because that's the standard sort of language for gangsta rap, is that what you're saying?

B-Fade: Absolutely, and a lot of them are not even living that lifestyle.

Tony: Getting back to your music, there are some great tracks on 'All Things Are Possible'. On "My King Go" you talk about living for the King and for talking to the hood; so where's your hood?

Tony: Are you able to get a living from your rap music? Are you a full-time professional rapper?

For more on B-Fade visit the B-Fade artist profile