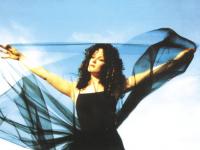 The release in June of 'Beautiful Lumps Of Coal' by Plumb sees a return to the frontline of one of the most gifted singer/songwriters on the Nashville scene. Tiffany Arbuckle Lee may not be a name Joe Public would recognise but now that this hugely gifted purveyor of alternative-tinged pop rock has taken on the name originally allocated to the band she fronted from 1997 to 2000, success as a soloist will surely follow. Speaking about her debut solo album, Tiffany/Plumb explained its strange title. "I love to write in metaphor so you can take any one of the songs I've written, especially from 'Beautiful Lumps Of Coal' and think it's about a boyfriend or girlfriend, husband or wife, parent or child. You can take each one for what it means to you, but each one also has a real muse behind it that may not be what you expect. All that they really have in common is that every song is about something potentially catastrophic or horrible that, much to your surprise, still might lead to something good.

"A diamond, the most beautiful gem we have, is made from coal, one of the ugliest things there is. Whatever lump of coal you've been dealt in this life isn't there because you did something wrong or you don't deserve better, but because God has entrusted you with something that he knows you can handle and that will make you that much stronger."

Tiffany was born in Indianapolis, raised in Atlanta, and has lots of siblings. She is the youngest and the only girl. From the start, she was drawn to music but in those early years she never dreamed she would follow this muse all the way into business. In fact, where the typical superstar biography describes years of doggedly chasing success, Tiffany's story is more about receiving gifts,Â­ gifts of talent and opportunity that seemed to come unbidden toward her. After graduating from high school, while planning to major in special education at college, Tiffany took a few gigs as a backup singer in Atlanta. At first, this seemed just like something fun to do until real life would intervene. But when gospel superstar Bill Gaither invited her to join his band, she found herself on the road for a few years. This led to session work, and that prompted her to finally set her college plans aside and move up to Nashville.

Once again opportunity presented itself, when Tiffany was offered a record deal solely on someone hearing her backup singing (presumably with the group Benjamin, fronted by Bill Gaither's son Benjamin Gaither). Having decided that the strikingly pretty 20 year old singer could do more than bvs, Essential Records hardly showed artistic discernment. Essential originally wanted Tiffany to be a Christian version of teenybopper Debbie Gibson but then changed their mind and decided Tiffany could be a 'Christian version of Alanis Morissette.' A band was formed consisting of Tiffany (vocals), Matt Stanfield (keyboards), Steven Leiweke (guitar), JJ Plasencio (bass) and Joe Porter (drums). The group's name was initially chosen from a song Arbuckle liked called 'My Favorite Plumb' by Suzanne Vega. The band's debut album 'Plumb' was co-produced by Dan Haseltine of Jars Of Clay and fledgling producer Matt Bronleewe. The album, with its contemporary sounds reminiscent of Morissette, PJ Harvey, Bjork and Garbage, was a CCM hit, selling in excess of 100,000 units. The momentum built with the band's second release, 'Candycoatedwaterdrops' in 2000, for which she received a Dove Award.

One day, a few hours before playing what she thought would be her last gig, Tiffany was handed a note by a girl. The letter was about 'Damaged', a Plumb song Tiffany had written and recorded about a girl coping with being molested as a child. The message was simple: 'Whatever you do, I just want you to never forget that you have changed someone's life.' As she sat in the car, Tiffany felt a knot in her throat. "There I was contemplating not even doing this anymore because I had gotten a bitter taste in my mouth about the business," she recalled. "It hit me that this wasn't about me. I'd been given a gift to communicate, to encourage and inspire. It wasn't up to me to say "I don't want to do this anymore."

Three years have passed since Plumb's 'The Best Of' album. During those wilderness years, Tiffany got married, focussed on songwriting and producing and signed with Curb Records. "I said to each interested label, 'If I sign with anyone, I want the moon.' The first draft of the contract that Curb sent was more than I had even considered asking for. Another opportunity had fallen into my lap; so, again, here I am." The result is, 'Beautiful Lumps Of Coal' produced by Tiffany and Jay Joyce (Patti Griffin, Rubyhorse, Lisa Germano). The album is a musical kaleidoscope; raw, gutsy rock, exuberant pop and sweeping string-blown ballads craft a vivid, vibrant spectrum of sounds. There has been a lot of excitement about the new release. Notably, two tracks feature on the soundtrack for the Gwyneth Paltrow movie A View From The Top, one of which, 'Boys Don't Cry' is the lead single.

The album echoes stories from Plumb's own recent transformations: from being alone to being married, from one label to another, or from older relationships to the realisation that her necessity for friendship has evolved in unexpected ways. "The album is a clear representation of my growth as a musician overall and the many changes I've experienced the last few years. Change of any kind involves loss and any kind of loss involves grief. Through this kind of grieving I've grown to be in a better place, with better management, a great marriage, stronger friendships and more independence at the same time."

"I hope the album is real and honest," remarked Tiffany. "The album is aimed at anyone and everyone." Indeed, each of the tracks exhibits a topical immediacy that reveals an artist who understands the issues that affect her listeners. On 'Nice, NaÃ¯ve And Beautiful', Tiffany/Plumb offers a beacon of hope to those who have been abused in one way or another. "Every abused person I've ever met harbours a sense of hopelessness. They feel like they're damaged goods; that they're not good enough, or that they deserve what they've gotten. What they don't realise is that there are so many who have been there too and that it's not their fault that somebody yelled at them, or hit them, or touched them. I want to say, 'If you've been there, you know what I'm talking about. And if you're still there, hang on, because you can turn into something beautiful.'"

One of the most arresting songs on 'Beautiful Lumps Of Coal' is 'Real'. The singer commented on the song, "The muse behind this song was Jennifer Lopez's dress at the 2000 Grammy Awards Â­ the Versace dress that went all the way down to her navel. Now, I don't know Jennifer Lopez and I certainly donÂ¹t hate her, but when the media went off on her dress for weeks I thought, 'We're such a sex-driven society, and that's sad because there's so much more out there that's more beautiful than nakedness yet we can't see that, because that's all that's shoved in our face.' At some point in your life, your boobs are going to start to sag and you're not going to look like you did when you were 23. Those people at the Grammys, or even in your high school English class, aren't going to be around anymore. The scene will change, the lights go down, and how you looked to them will fade away. What will you be left with? When you're on that empty stage, when no one is there and your makeup is off, what will you have to offer? There's more to you than sexuality and I'd love to see you find what that is and emphasize that in your life."

I heard you on sirus radio and could relate too so many things you have been through.Thank you for sharing God bless you.

I loved plumb and her band. What a beautiful soprano voice she has and the lyrics to her songs really touch my soul.Your music is such a blessing to all. Keep it coming. Going to download many of your songs on my iPod for inspiration.

The song I need you now is one of the best cry out to God songs I have ever heard.
Thank you for letting God work in your life so that we can sing along with you as we trust our Lord and Savior.
Keep these songs coming.
Thanks again
Dale

Plumb was at Mariner's Church in Irvine, CA tonight and incredible! She was kind, gracious and generous with her time, allowing photos and conversation with every woman that was standing in line to meet her. What an amazing talent and genuine, decent and kind human being. It was an absolute blessing to meet her!

you are such an inspiration! your song " need you now" is soo amazing! when i heard the story behind the song, i related to you instatly! i had the same experience in high school and recieted the EXACT verse you did! i leared it off of odessey when i was young and ever since then it has helped me through a lot, especailly high school! thank you so much for writing that song! it's great to know i'm not alone!! Keep up the amazing songs:) and God bless!:)

I first listen when my Sgt. at the prison we work introduced me to the group. I loved the sound and the beat to the music. Also the songs tell a story. I am so glad that the young lady handed you that note about saving her life, and you making the decision that your music is for your fans.
Thank You.
Suzanne Carmean

this is the first time i have ever listened to Plumb i am so touched in my soul from her music i can hardly wait to buy some of her music.i am 65 yrs old & have always loved the Christian music that touches my Soul She has a gift from our HEAVENLY FATHER

i agree with Ed and VJ. Her music has touched the very depths of my soul !!!

plumbs song good behavoir and damaged are the storys of my life...when i am upset i blast it .... its hard to hold the secreats but as a 1 year old they workk to keep it inn?:]]

I stumbled onto Plumb when I heard "Cut" on a local radio station. I thought it sweet, well crafted if not a little commercial. Obviously a female voice of lovely quality. I now have investigated a lot more of Plumb but I didn't pick her lyrics as being religiously motivated. Her use of metophors is quite subtle and clever. Some nice work Plumb and I love "In my arms". Sometimes she reminds me a little of a more mainstream Evanescence. I prefer Plums backing, seemingly less manufactured angst. Lovely melodies. Go Plumb. Keep writing some more!