Plumb: Joins the throng of Yule time songwriters with "Behold" 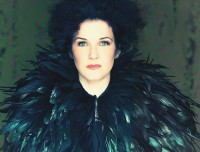 In an age where we're bombarded with Christmas songs about the Incarnation, old, predictable, rehashed carols and schlock Santa songs that jingle all the way, the news that Cross Rhythms City Radio favourite Plumb has decided to elbow her way into an area more crowded than Piccadilly Circus does not inspire a great deal of excitement.

The Nashville-based writer, performer and author, known to her mother as Tiffany Arbuckle Lee, has album sales of over 500,000 and singles sales of over two million. Her music has featured on many film soundtracks, in television programmes and she has co-written songs for numerous other artists. Plumb releases her celebratory EP 'Behold' this month, written with well-known singer/songwriter Christa Wells and Jerrod Morris, and the first single release is the title track.

Of the song, Plumb said, "'Behold' is the Angel speaking to us; telling us what you have been anticipating has come: Here Is Your King. . . they were anticipating this decorated King, this fearless warrior, this intimidating soldier, yet they were given a baby born in a barn, who is all about love. It's exactly what we needed. . ." As she sings on "Behold": "Years of silence/Waiting on a King/They thought they knew who you would be/A soldier, fearless and strong/A warrior, but they were wrong."

Plumb also gave us valuable insight into the conversations she had during the writing process: ". . . were writing this song we were talking about how we in our own lives anticipate things coming or happening and sometimes they don't happen or they don't come in such a way that we thought or that we expect or that we wanted but that we can still trust in the same God that knew what we needed then, in a baby, [and] he knows what we need now in our own lives. . ." And she carried this idea into the song: "So we pray/We ask and seek/When the answers don't come easily/And when they're not what we expect/Help us to trust you even then." Catch the gently anthemic lyric video on Plumb's youtube channel: "Behold/A baby's birth/Precious Lamb of God/Behold/Your gift to us/Saviour of the world."