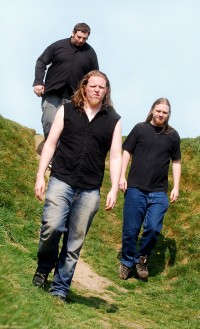 Oxford-based metal/hardcore/thrash band Back Pocket Prophet created quite a stir at this year's Greenbelt Festival. Not only did they do a storming set at the Underground venue causing Cross Rhythms' reviewer to comment, "[They] could well mature into a very savage and powerful beast," Back Pocket Prophet also took the unusual step of making themselves available for a press conference. For some obscure reason, although in recent years Greenbelt offers a stage to an impressive selection of hard music bands, it's rare for any of them to venture up to the upper level of the grandstand to "meet the media." But here were the fearsome-looking trio sporting the tattoos and body piercings long associated with metal music ready to talk to a bunch of religious radio broadcasters and denominational newspaper journalists who by and large wouldn't know the difference between hardcore and hardware.

Guitarist and lead vocalist Adam Gough spoke at the conference about how they arrived at their memorable name. "I had a bit of a dream about it and felt God give me the name. I shared it amongst the others and we felt it stuck. It came out of what we wanted to be. We wanted to be evangelists but reaching people through modern media. We felt young people nowadays have MP3 players in their back pockets and we can prophesy to them through our music."

Adam wasn't always the band's vocalist. Originally that position belonged to one TiNy who with Adam on guitar, Vic Barton on bass and vocals ("I shout a lot") and Tom Power on drums played a handful of shows in 2005 and 2006, including a slot at the legendary Ace CafÃ© in Wembley. In March 2007 the band released their first EP, 'Dead Men Walking'. Quite a few gigs followed covering large parts of the UK. This culminated with a headlining appearance at Chuckles Fest in June, a second stage appearance at the Greenbelt Festival and opening for Jeff Sheetz at the Meltdown teach-in in November. By the end of the year BPP had played over 30 shows in 12 months. This also saw the first change to the BPP line up with the amicable departure of frontman TiNy. Instead of replacing him the line up was trimmed down to a three-piece. The new line up was received very positively by both critics and fans alike and the band were rewarded in October '07 with runner up nominations in Best Metal Band and Best 3 Piece categories at the Glasswerk New Music Awards.

2008 saw the band release their second EP, the powerful 'Transposition', with the band playing as far apart as Denmark, Scotland and Northern Ireland. Adam was asked whether the band had achieved all they were likely to. He responded candidly, "We want to sort of expand the fan base of the band and push it. Not necessarily to being the biggest Christian band of the year but we would like to reach as many people as possible really. We feel it's part of God's plan and we feel that we need to prepare ourselves to be a bit freer, to be able to go more places, play bigger venues and reach more people. When we're within gigs we feel that we want to be able to talk to people more, reach them in a conversation afterwards. That seems to be the thing that we're going for in the short term, that we're able to reach people and talk to them right there and then after we've played the music. We don't really feel like we've got to push it in people's faces through the music and then scare people off but we are very evangelistic but we're not forcing it down people's throats."

Vic Barton added his comment, "The ultimate aim of the band is to reach people who wouldn't normally hear the Gospel, which is why we play secular venues with secular bands and that's really where we sit with the band. We want to reach people who just wouldn't listen to somebody preaching at them, just try and put it in a way that they can understand and relate to."

Some time after Greenbelt I asked Adam what he felt were the strongest songs on the 'Transposition' EP. He responded, "The title track is all about who we are and where we are going. We felt that the lyrics are simple but summarise who we think we are with our faith and relationship with Jesus. The whole feel of the song is progressive and has clear patterns that we felt reflected the changes that we as human beings go through in meeting and living our lives with God. God takes our lives as they are, and moves them into a different place. We move from being human beings, to become the supernatural, spiritual beings that we were created to be."

Another outstanding track on the project is "We Stand As One". Said Adam, "We felt that this song was our rally call to all people from whatever walk of life who have a belief in Jesus to come together and be unified through our faith and belief and help introduce this world back to its Saviour. We felt that the lyric 'we stand as one' was a call to be united to change this world through our faith and our love for each other. Our local church and being part of a body is very important to us and we all felt that it is integral to anybody's faith that they are part of the local church community and body. We felt that people are very easily picked off when on their own and we felt that there isn't any good to come from being a lone ranger in God's kingdom. It is a collective faith and loneliness and isolation fight against that. So our inspiration for this song was to help and remind people the importance of unity in the Church and in the world as a whole as well."

With 'Transposition' having received considerable airplay on hard music radio programmes (including extensive play on Cross Rhythms' Rock And A Hard Place) the band are encouraged to push on in their plans to cut a full length album. Said Adam, "We are looking to record a full album in the near future and have started to write new material. We are looking to write around eight songs and also re-record a few old songs that we have adapted. We felt that the songs we want to re-record have a new flavour to them and are still relevant for us as a band. We currently have no fixed plans and therefore aren't really able to comment too much on who, what, where and when we will be doing the recording, but it is definitely on the cards in the next year. We hope to have around 10-12 songs on the album and want it to be as professional as possible. We have already recorded two EPs and feel that the time is right to move the band on to the next stage. The two previous recordings helped us to move and develop as a band and also helped us define our sound. We hope the next recording will do the same and will help us focus and develop our sound even more."

I finished my brief inquisition of Adam by asking him why he felt it important that there should be hard music bands proclaiming Christian truth. He was typically forthright in his reply. "Because there is a large neglected, often feared group of people in the world that will never hear the message or Gospel of Jesus if we don't meet them where they are. We feel that we are called to meet people on their journey in life, not to try and drag them to a building and onto our own journey to follow blindly. This is why we feel it important to be a heavy band playing in their lives not just in a church building. We also enjoy heavy music and there are also lots of Christian people who enjoy heavy music, but may not feel that comfortable with some lyrics in secular heavy metal or heavy rock bands. We feel that we can help people to enjoy the music they want with a good message of love, peace, excitement and passion."

Cool! I've seen this band many times now, and it's brilliant to see young people who would probably not step inside a church responding to the music, and getting to know the guys in the band. Thank You God!!!