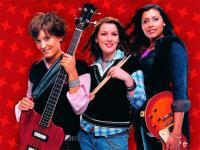 New all girl pop rock group BarlowGirl have the kind of story you couldn't make up - three teenage girls meet up with successful CCM band Superchic[k], impress the group with their strong stand on sexual purity, Superchic[k] write a song about the girls and their no-sex-before-marriage stance called appropriately enough "Barlow Girls", it becomes a major hit on American Christian radio, and before you know it, there is a whole movement with BarlowGirl website, BarlowGirl T-shirts and thousands of young Christian girls declaring that they too wish to make a stand like the Barlows. Now the sisters Barlow have been signed to Fervent Records and their debut CD is in the shops.

The sisters grew up in Elgin, Illinois, and got their start as a backup band for their father, Vince, a children's music minister at Willow Creek Community Church (the second largest church in America). Rebecca (24, guitar, bass), Alyssa (21, bass, keyboards) and Lauren (18, drums) first met Superchic[k] at a Christian music festival, Lifest, when both groups were playing there. Remembers Rebecca, "We were so excited to find another band with girls in it and we just had to find out who those adorable girls were." Continues Alyssa, "Also our Dad knew Max (Hsu, the leader of Superchic[k]), so while they were talking we ate lunch with the rest of the band. While we were talking someone noticed our purity rings and went, 'There's no way you girls are married!'" Lauren joins in, "So we told them about our commitment to purity, not dating, and waiting for our future husbands."

The girls had no idea that this meeting was going to inspire what was to become Superchic[k]'s most successful song. Becca recounts how they learnt of Superchic[k]'s "Barlow Girls" song: "A couple months after Lifest they asked us girls to go to one of their concerts, then afterwards go to Max's house 'cause they had something to show us." That night at the house they were shown the song. Alyssa says, "We tried to act all calm and cool." Lauren adds, "Like, 'Oh yeah. Thanks for writing a totally rad song for us.' But as soon as we got in the car we looked at each other for a second and just started screaming." "It was so honouring that they noticed our stand and not only respected it but wrote a song about it," comments Becca. Back to Alyssa, "It was amazing! We had been feeling so alone and pretty discouraged, but after we heard the song it was like God reminding us that we weren't doing this in vain. Now any time we are feeling lonely, or wondering if this is worth it - we pop in the song."

In one BarlowGirl website the girls spell out precisely what their vision of purity is. It comes down to three elements: 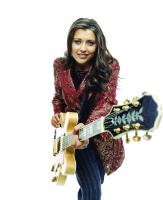 TRUST - "We believe that God is calling everyone to live a life that is fully surrendered to him so that he can do his work in us and begin to show us his true purpose for our lives. We're definitely not saying 'we've mastered this concept and now it's your turn', but instead that this is a daily process and a journey that all of us will be on forever."

PURITY - "In a world that constantly bombards us with impurity and immodesty, we feel called to take a stand against what the world is telling us is acceptable. Especially in the area of clothing and modesty."

NOT DATING - "We believe that God has one perfect man already chosen for us; therefore we have no need to worry ourselves in searching for him. When the time is right we know God will bring us together. In the meantime we are not hiding in a closet avoiding all males. We are still living our lives, just without the pressure of having to have a boyfriend."

Musically, BarlowGirl demonstrate a surprisingly mature sound and one which shows considerably diverse musical influences. Explains Alyssa, "We don't really have a specific sound...I guess we are more of a mix of a lot of different styles. We have our rock songs, our punkier songs, then we try to also do ballads, and we've even attempted jazz... notice I said attempted!" On their album, all three of the girls took a hand in songwriting, drawing material from their own journals. Letting people know that they are all going through the same things together and that no one is on their spiritual journey alone is important to the group. "Everybody is going through the same stuff," says Alyssa. "That's why we love that God has allowed us to use music as a platform to get our ministry out. We have an opportunity to say that we're real, we struggle with these things, we fell here, but God has lifted us up. We have never written a song that said, 'We learned this, here you go.' We're still going through this. Our songs still help us!" 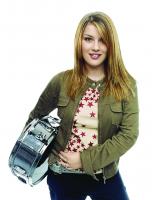 The final word on the extraordinary rise of BarlowGirl is left to Lauren. "This record has been birthed out of the last three years, and the journey of everything we've done our whole lives. It's amazing to see what God has done with it and how he has built a ministry out of it. He's using three normal girls from Elgin, IL, who have nothing to offer apart from Christ. We were all ready to go do our own thing, and he called us and turned us around and said, 'I have something for you to tell the world'."

I got Barlowgirls CD this past summer and fell in love with every song! I told exactly what was going on in our world today and what us as christians go through and struggle with. thanks Barlowgirl!!!