BarlowGirl: Radical rockers ask "How Can We Be Silent?"

A girl trio who speak out for sexual purity and engage in spiritual warfare, BARLOWGIRL aren't your average rock band 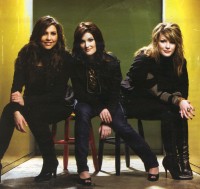 The rise and rise of American rock'n'roll sisters BarlowGirl seems a relentless force of nature. First immortalised in the song "Barlow Girls" by Superchick, their very name came to represent the movement of young US teens opting for sexual purity prior to marriage. By the time Fervent Records released the girls' 'BarlowGirl' debut in 2004 they were already a recognised "brand" though, thankfully, rather than recording vacuous teen pop for the safe Christian market the trio - Lauren, Alyssa and Becca Barlow - surprised many critics with an album of credible, edgy pop rock. Their self-titled debut spawned the hit "Never Alone" and has sold 311,000 units, according to Nielsen SoundScan. The group's second album 'Another Journal Entry' has sold 278,000. But the trio don't worry about their well publicised Christian values overshadowing their music. "Our whole desire is to show people it's okay to be radical for God," Becca told Billboard magazine recently.

Now BarlowGirl's third album 'How Can We Be Silent' has just been released in the States. Taken from a line in the song "A Million Voices", the disc's title is inspired by the overwhelming greatness of God and the need to fulfil a Christian mission. Once again the trio teamed with producer Otto Price, hoping to create more mature rock sounds in both ballad and uptempo formats. "I think one thing [is] that we really wanted to encourage people," Alyssa told Christian Retailing. "If you know the God we serve, who we're living for, how can we be silent about him?" Tying into that is an album cover of the trio in a boxing ring presenting the concept of spiritual battle, but at the same time being confident in the battle's outcome. Continued Alyssa, "Our number one goal is to stand and see the victory of God, be faithful in standing for him. This whole journey is a battle, and we wanted to portray that with an image."

The singer also discussed walking the fine line of including themes that aren't always positive and the desire to convey hope in the midst of darkness, as the trio deals with problems listeners face such as broken homes, peer pressure and self-cutting. "We make a conscious effort not to err on the side of the struggle or how hard it is," commented Alyssa. "There are times when we've had to go, 'We need to make sure there's a hopeful note by the end of this song so that people don't get discouraged at the end of the day.' Also I think as writers we have a responsibility as well that if we are going to shed some light on difficult times, we need to show victory; we need to show hope; we need to show God's promises at the end of it."

Alyssa said that part of the band's mission is to "counteract what's happening in our culture," addressing relevant topics and "bringing some light." Lauren, the youngest of the three sisters, echoed Alyssa's viewpoint in the Billboard interview. "We as Christians have to fight. We have to fight against the things of this world that are trying to drive us down. So that is what that boxing ring symbolises - to fight and to not give up." Middle sister Alyssa added, "There's really a lot going on right now in our generation. If we continue to stand in God's strength, we will see him win the battle."

The first AC/Top 40 single "Here's My Life" from 'How Can We Be Silent' is the most personal song on the album. "We wrote it about how we are always having to leave home and leave our most favourite blessings," Becca said of their nephew and nieces. "We'll be on a bus or an airplane, looking at pictures and crying because we're missing different pieces of their lives. But we know that God has called us to do this."

The song "Keep Quiet" addresses a concern the girls have about down-playing the name of Jesus in culture. Said Alyssa, "People might think, 'Hey, you know Jesus' name is offensive to so many people in this culture, so what if we don't speak his name so much and just be good people?' The more. . .we heard that seeping into our culture, we wanted to address that right away."

With the latest project the sisters are confident to press ahead, delivering their music to a youthful audience and gaining greater respect from their peers. Alyssa admitted that in the beginning, before the songs "Never Alone" and "I Need You To Love Me" became US Christian radio staples, they were treated with scepticism. "I think in the beginning (maybe we weren't taken seriously)," she said. "It was 'a band of three girls, and they write.' I definitely remember in the beginning years people going, 'Oh, what is this all about?' Almost like a 'prove yourself, girls.' I think now, since we've been in this for four years now, I don't see us coming up against that at all."

I just got given your new album, and its really good. Love it,
Love You,
God bless
xxxxxxx

wow, i need as much info on barlowgirl possible!