Barry Evans: From superstars to praise and worship 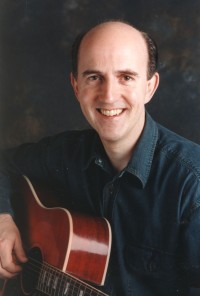 The release of the 'Worship With All Your Heart' album may be the CD-debut for worship leader Barry Evans. But it's far, far from the initial release by a wet-behind-the-ears newcomer to the music business. For Barry Evans is both one of the seminal behind-the-scenes figures in the growth of British Christian music plus a man who's breathed the rarefied air of the upper echelons of the music industry. Once a top executive for first EMI then Phonogram and a man on first name terms with many of the music industry's movers and shakers, Barry Evans seems an unlikely figure to enter the demanding field of grassroots ministry where budgets are thin and rewards are few. But Barry Evans is a man who has seen firsthand the pitfalls as well as the prizes of the music industry big time (both non-Christian and CCM) and is now determined to walk where God leads rather than where market forces dictate. Says Barry, "When I was out in the States I saw too much of compromise and materialism affecting the decision making of American CCM companies. I spoke to one executive who said that much of his time was spent in committees trying to think up the next gimmick to sell praise and worship albums. Most of the major Christian companies are now under the control of non-Christian multi-nationals and the effect of this has been that the bottom line, the potential profit of each recording, dominates the thinking of the companies."

In a brave venture, Barry Evans plans to buck the system of production-line praise. He has launched a new independent company Power Records (distributed in the UK bookshops by STL) and Power's first release 'Worship With All Your Heart Volume 1' with worship songs sung by Barry himself, is an effort to restore intimacy and spontaneity to worship recordings. The album was recorded in two complete worship times at Power Records own studio with a seamless seguing between tracks. Its spontaneity and freshness shines through. "Coming back to the UK from Nashville I got a revelation about worship. I began to see that so much of what we call praise is in fact more celebration than true praise. Some was praise but some may be merely jumping up and down. In my search for intimacy with God I began to discover worship that was very open and very intimate. To create that in the recording studio was the challenge. So often in the recording process the temptation is to get it all perfect. Everything multi-tracked, bits of vocals dropped in. I set about it differently, recording myself, voice and guitar, at the same time and really letting go in worship. I'd repeat the process until God's presence was clearly discernible. There might be a few tiny errors in such a process but such a method retains the anointing. Then I asked some of my musician friends, like Dave Markee (bass), Grenville Harding (keys) and Mike Perlett (saxophone/flute) to come in and add their contributions to the tracks. I believe the end result is an album which will really lead people into worship, not merely teach people a set of worship songs or display great musicianship - though there's some fine playing on 'Worship With All Your Heart' - but music that would genuinely draw listeners into the presence of God."

Barry taking up a ministry behind the mikes really means that God has brought the 46-year-old music industry veteran full circle. Barry grew up in a Salvation Army home and was converted at age six. As a teenager Barry sang with various Christian rock bands and in the early 70s took the lead role in Christian musicals such as 'Hosea' which toured around Britain. But on gaining a degree in economics, accounting and law, Barry's life went in a very different direction from the financially impoverished world of grassroots church hall ministry. After qualifying as a chartered accountant with Price Waterhouse he joined EMI providing financial and commercial advice to the fast-growing entertainment multinational. In 1976 Barry was promoted by EMI to become deputy financial controller and in 1977 Barry was made general manager. During this era some of the artists Barry was involved with included Paul McCartney, the Rolling Stones, Kate Bush, Pink Floyd, Cliff Richard and Queen. In 1979 Barry was headhunted by the Polygram Group to join Phonogram Records as marketing and sales director taking over marketing responsibility for such acts as Dire Straits, 10cc and Status Quo.

In 1980 Barry set up his own promotion company which quickly became the most successful nationwide promotion and marketing company in the record and computer games software industries. Working with the record companies he was jointly responsible for the career launch in the UK of such megastars as George Michael, Whitney Houston, Boy George and Robert Palmer. Despite enjoying the rewards of the music biz big time, Barry didn't completely shake off his Christian counterculture roots. In fact in the '80s he was a key figure in striving to see different British Christian artists break out of the Christian ghetto and make it to the national pop charts. In 1982 gospel funk team Paradise charted with "One Mind, Two Hearts", a number produced by Barry and released on his own label Priority while in 1987 Priority charted again with "Tears From Heaven" by Heartbeat. Barry also worked on the brief chart appearance of "Let The Flame Burn Brighter" single for Graham Kendrick. But behind all the work, money and glamour of Barry's life, all was not well as he now admits. "I was drifting backwards spiritually. I'd long been known as a Christian in the mainstream music industry but somehow I'd lost my thirst for the things of God. Towards the end of the '80s I recommitted myself to the Lord." Barry helped plant a church, Cornerstone Ministries in Esher, and every Wednesday night he would lead worship at the fellowship. But then Barry was asked to go out to the USA to live and work as a full time consultant to the world's largest independently owned record company and music publisher, the Zomba Group, to investigate the Christian music industry with a view to overseeing Zomba buying in to the Christian music business. In the protracted negotiations that followed Star Song Records was lined up for purchase by Zomba. But the deal fell through and eventually it was Brentwood Music which was purchased by Zomba. Barry's first hand experiences in the American music industry were not altogether pleasant.

"Promises were made, then broken. The dollar rules in the industry, even the Christian music industry, and all the wheeling and dealing is often a long, long way from the principles of the Kingdom of God. In some Christian Record Companies too often input from the Holy Spirit is overwhelmed by concentration on the things of the world. This seeps through to the artists, some of whom end up falling. Christian record companies have a responsibility to see that their artists are being adequately pastored. Situations have arisen in the States with artists like Michael English and Sandi Patty where people should have spoken into their lives. They didn't, they fell and they brought dishonour to God. As someone who has spent the last 20 years in the record industry it concerns me that Christians are too often using the same standards, the same business techniques, that the world adopts, rather than being guided by the Spirit, the source of truly unique creativity as well as the power behind Christ-like relationships and business dealings.

Barry's sometimes traumatic experiences at the epicentre of the CCM industry came to an end in late 1994 when Barry and his family moved back to the UK. Settling in London, Barry found himself at a crossroads in his life. Was he to return to the lucrative world of mainstream record promotion or was he to begin to put his vision for a more Godly, more Spirit-driven record company into place? On one level he seemed to have little choice. Little money and disinterest by Britain's large Christian record companies for the concept of an anointed, intimate worship series called 'Worship With All Your Heart' could have propelled Barry back into the secular industry. Instead, Barry began to look to God for provision and within months the first volume of 'Worship With All Your Heart' was more than a pipedream, but a new CD in the bookshops. Comments Barry, "All the various events leading up to the album being in the shops, the finance, the recording, the mixing, and the mastering is a tale of the Lord's provision. On several occasions it looked like I'd hit insurmountable problems. But we can be deceived by looking at apparent circumstances. The Lord will meet every need if only we will obediently seek him. Every time through prayer I saw God intervene."

The album, with a subdued middle-of-the-road sound of tried-and-tested worship choruses (including the number one most popular chorus in Britain "Be Still" as well as evergreens like "Jesus Name Above All Names" and "He Is Exalted" as well as excellent Evans originals like "Father I Adore You" and "Our Father" - based on the Lord's Prayer) will appeal to those untouched by slick production-line praise and those whose churches have yet to experience renewed worship. "'Worship With All Your Heart' is definitely not just for the New Churches. I've tried to come up with something that will minister to people regardless of their particular church tradition. Worship is the pivotal point of a church service. In the past too often it has become a sort of support aid for the sermon and true, intimate worship is one of the keys to bring each of us into closer personal relationship with the Father leading to greater Christ-likeness and holiness as well as bringing unity to the body of Christ. I'm just thrilled and humbled that God has made a way to produce a series like this that gives people the opportunity to discover for themselves how life transforming true worship really is."

Great article --I know Barry Evans AND WOULD LIKE TO KNOW IF i CAN PURCHASE HIS cd IN cALIF.