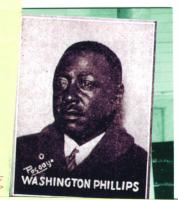 There can be few songs covered by artists as diverse of Ry Cooder, Barry McGuire, the 77s, Sister Rosetta Tharpe and Mike Bloomfield. Yet Washington Phillips, the man who wrote and originally recorded the much-recorded "Denomination Blues" lived and died in relative obscurity. Yet, since its release the CD 'I Was Born To Sing The Gospel The Complete Recorded Works Of Washington Phillips' has been a steady seller for blues specialist Yazoo Records while his haunting and elegant attack on denominationalism remains in the repertoires of numerous blues, folk and rock artists. George Washington Phillips was born to sharecroppers Houston Phillips and Emma Titus. The young Phillips had himself begun to farm before embarking on a life of itinerant preaching in a country fertile with small white frame churches.

In 1927 legendary A& R man Frank Walker (who discovered Blind Willie Johnson) conducted a field trip to Dallas, Texas looking for talent to record and came across a performer who, he later admitted, fascinated him, a gospel singer who accompanied himself on the rare, zither-like dolceola.

Washington Phillips began recording for Columbia Records. His first song, "Take Your Burden To The Lord And Leave It There", seemed to be a good choice to initiate his recording career, as it had become well known throughout the South since its composition by the famed Rev Charles A Tindley, circa 1900. Backed by "Lift Him Up, That's All", another early song based on the Gospel of St John (and borrowing loosely the melody of an older hymn, "The Great Reaping Day"), the record was rushed into a large pressing in a matter of weeks in anticipation of good sales. This, and subsequent releases, enjoyed brisk re-orders from Southern dealerships. The remainder of the first session was not issued until later. Instead his next record - recorded the following week on December 5, 1927, was perhaps to be his classic. "Denomination Blues" was an original composition employing the little-heard practice of calling the Denomination Train (ie, a string of various religious groups by name) and stretched over two parts. Phillips, inadvertently or not, had created one of the few "Holy blues" by employing the melody of "The Hesitation Blues" (which WC Handy claimed to have written).

More recording sessions took place in Dallas in 1928 and 1929. It was there that Phillips recorded another original song based again on John's Gospel "I Am Born To Preach The Gospel". Beginning with a spoken introduction (a device which eventually became a trademark and was elaborated on more fully in "Train Your Child"), he borrows the tune of "I Wouldn't Mind Dying" for the refrain and sounds the dolceola with a carillon quality. His moralising sermons on miseducation and backsliding preachers take on added momentum with increased repetition as themes.

Washington had time for a final classic recording, the emotional statement "I Had A Good Mother And Father". With his playing and poetry in combination with the unique falsetto singing, his greatest triumph received the least exposure. After his final session, Phillips slipped into obscurity. In fact, many historians have subsequently claimed that he died in December 1939 but new research by Michael Corcoran shows that Phillips, after retiring into farm life, lived on until the age of 74 when he died in 1954 from head injuries. He left behind a legacy of timeless music.