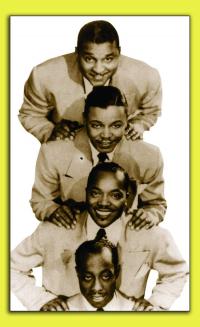 Younger record buffs might think that the phenomenon of Christian music groups expanding their territory beyond the churches to play mainstream nightclubs was a new trend had better check out the fascinating history of The Golden Gate Quartet. This venerable team of gospel harmonisers were one of the first to take the music of the African American church to a white secular audience and in doing so helped pave the way for all the "crossover" acts that were to come. The Golden Gate Quartet started in Norfolk, Virginia, in 1934. The group was formed there at Booker T Washington High School consisting of William Langford (tenor), Henry Owens (second tenor), Willie Johnson (baritone) and Orlandus Wilson (bass). Recalled Wilson, "The group started singing in glee clubs in the high school days and before that, as youngsters in those days they sang in the churches because they came from religious families, and they always organised in the churches what they call the junior choirs and youngsters they begin to sing in the choir, junior choir in churches, at the age of seven and eight years old. When we began to go to school together and sing in the glee club, we decided to organise the group Golden Gate Jubilee Singers."

After their school years the group bought a beat up car and began to tour around North and South Carolina. Gradually the group began to develop a new musical style, less dependent on the old jubilee sound with its precise barbershop harmonies and more rhythmic with plenty of fiery improvisation. By 1936 the group were broadcasting five days a week on a radio station in Columbia, South Carolina. In the following year, they were approached by a talent scout for RCA Records and began what was to prove a hugely successful recording career. A veritable flood of 78s were released on RCA's Bluebird label from 1937 to 1939 and after the group moved to a bigger radio station in Charlotte, North Carolina, the group were well on the way to being acknowledged as one of the best in the whole burgeoning gospel scene.

Up until then though, the gospel music audience had been very much a black one. That was soon to change. Remembered Orlandus Wilson, "One morning, after our radio show, we received a telephone call from a gentleman; he introduced himself as John Hammond. John Hammond at that time was a jazz critic and he was always travelling through to discover jazz musicians, blues singers and so forth. And, he was organising a programme for December 24th 1938 at Carnegie Hall in New York, called From Spirituals To Swing. And this was during the fall of 1938, when he telephoned us, and he asked if we would be interested. To go to New York, this was a fantastic thing, and just the name of Carnegie Hall meant a great deal."

After the From Spirituals To Swing Carnegie Hall concert (which alongside The Golden Gates featured Benny Goodman, Count Basie, Duke Ellington and Big Bill Broonzy) the group were given a residency at Hammond's famed Caf... Society nightclubs in New York and soon the group were bringing gospel music to a sophisticated multi-racial audience. The group were offered a chance to broadcast with CBS, a unique opportunity for a black gospel group, and by 1939 they had become the Golden Gate Quartet and had begun recording for Columbia who released a pile of 78s on its Okeh subsidiary. The group's repertoire began to diversify, singing spirituals like "Joshua Fit The Battle Of Jericho", "Swing Down Chariot" and "Nobody Knows The Trouble I've Seen" alongside popular songs, ala The Mills Brothers. Unprecedented success continued. They played at the inauguration of Franklin Roosevelt, went to Hollywood in 1941 where they appeared in four different films, the last of which featured them alongside Danny Kaye, Benny Goodman and Louis Armstrong in A Star Is Born.

After the war, the group recorded steadily for first Mercury then Sittin' In With but gradually the African American audience for The Golden Gate Quartet's mixture of old time spirituals, broadway show tunes and showbiz style began to disappear as the harder, more soulful quartets began to travel the Gospel Highway. But having played Europe in 1955, the group unexpectedly found a receptive audience for their music, particularly in France. In 1958 the group were clearly being regarded as not only ambassadors of gospel music but representatives of all that was good in the USA with the State Department taking The Golden Gate Quartet to 28 different countries, starting in Greece and ending in the Far East. At the end of that tour the group came back to Paris and signed a contract to open at the Casino de Paris where they played for two years. The group continued to record regularly, though now it was albums for French Columbia. The Golden Gates (by now Clyde Riddick, Clyde Wright, tenors; Caleb Ginyard, baritone; and Orlandus Wilson, bass) were showbiz favourites in France where they performed with a pianist, a bass player and a drummer.

In 1971 there were more changes in the group with Calvin Williams replacing Caleb Ginyard and Paul Brembly coming in for Clyde Wright. In 1980 the group recorded an album, 'Jubilee', which celebrated 25 years of tours in Europe while in 1999 French Columbia released the double CD 'Our Story' which documented one of the longest running musical histories of the 20th century. Today the group's huge musical contribution is overdue for reassessment, with their rapid-syllable, rhythmic acappella having been sampled more than once by dance producers with a fraction of their talent. What can be said though is that without groups like The Golden Gate Quartet it's unlikely that the concept of "crossover" would exist in today's modern scene.