Tony Cummings looks at the huge musical influence of one of the great quartets, THE SWAN SILVERTONES 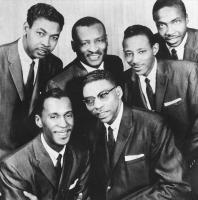 Such is Christian retailers' strange myopia towards black gospel's historymakers that if you walked into just about any Christian bookshop in either the USA or the UK and ask for recordings by The Swan Silvertones you'd be met with a blank response. Intriguingly, though, non-Christian music buffs sometimes know better. In a recent Mojo magazine super session musician Al Kooper, when asked to name his "Sunday morning record", admitted that "Sunday mornings I have my little chat with God and nothing is better than a CD I compiled of the best of the Swan Silvertones on VeeJay. They were The Beatles of gospel." Similarly, Paul Heaton of The Beautiful South raved about the Silvertones' stunning lead singer Claude Jeter to Q. "When I last talked about Claude Jeter, it was with Smash Hits and they inadvertently put his name as Courgetta! He's not only got one of the sweetest falsetto voices, he's also got one of the sweetest and smoothest changes from falsetto back down to contralto. He never screams, he just let's the back of his throat do the talking."

The group was formed by Claude Jeter in 1938 in Coalwood, West Virginia. Known originally as the Four Harmony Kings, they changed their name to The Silvertone Singers to avoid confusion with the already established Kings Of Harmony. When the Swan Bakery began to sponsor the quartet's Knoxville radio show, the group gradually became known as Swan's Silvertone Singers. Thus, the Swan Bakers bought a measure of immortality never imagined by their original sponsorship.

Syd Nathan, owner of King Records in Cincinnati, came to Knoxville to audition the group. Between July 1946 and May 1951 the Swan's Silvertone Singers recorded 45 issued titles for the company. Their first 78, "I Cried Holy"/"Go Ahead", was the most successful, selling a respectable 35,783 copies during its first two years on the market. The Swans' tenure at King saw them making a transition from a jubilee sound to a more contemporary "hard gospel" approach, especially after the addition in 1950 of second lead vocalist Percell Perkins. Yet the company was reluctant to let them stretch out and shout as they did in their live performances, instead insisting they record in a more restrained "folk" style. "They only wanted hillbilly-style gospel," Jeter complained years later to author Anthony Heilbut. "They didn't care too much for the real gospel."

The group was so dissatisfied that their manager began courting Specialty Records nearly two years before the King Records contract was to expire. Signed to Specialty, the Swan Silvertones, by then consisting of primary lead singer Claude Jeter, second leads Solomon Womack and Robert Crenshaw, tenor John Mason, baritone John Myles and bass Henry Boussard, recorded eight selections at a Pittsburgh session, of which "The Day Will Surely Come" and "Since Jesus Changed This Heart Of Mine" comprised the first single.

Personnel fluctuated during this period. The rocky gospel highway was taking its toll. Some members quit, having found it impossible to support their families through singing, while the road literally killed Womack. "He'd come out singing, raining sweat, and then go bareheaded in zero-degree weather," Jeter told Heilbut. "We had to cut him loose and next thing we knew, Womack was dead."
After ending their relationship with Specialty in 1955, the Swans moved to VeeJay in Chicago and finally hit the jackpot with such hits as "Oh Mary Don't You Weep" (from which an ad-libbed Jeter line inspired Paul Simon to write "Bridge Over Troubled Water") and "Saviour Pass Me Not". Their style had changed, however. They added a guitarist and sleekened their already unique vocal blend to a sound that was, in the words of gospel broadcaster Joe Bostic, Jr, "smooth as polished glass."

Another early title, "A Lady Called Mother", revealed a different aspect of the quartet sound as the Swans plainly chant "doo wop" in the background. The sweet falsetto style of Jeter, so redolent of Sam Cooke at times, is shown in all its breathtaking soulfulness on tracks like "Brighter Day Ahead" and "Stand Up And Testify". "At The Cross", recorded at the end of a marathon session in 1963, shows the other end of the gospel spectrum: a "hard" soulful narration that, but for its subject matter, would have been at home on the R&B charts several years later. Indeed, when Claude Jeter retired, the essential spirit of The Swan Silvertones had been spent. By then soul music, the illegitimate spawn of gospel, had turned the tables and was beginning to influence the sound of gospel music. From Claude Jeter's point of view, it had all been said.

As Hank Davis wrote on the sleevenote of 'Get Your Soul Right', the CD compilation of 21 of their classic VeeJay recordings on Charly Records, "Claude Jeter and the Swans had paid their dues in miles and years. Jeter's sound was on the lips of countless singers who didn't know his name and perhaps never would."

The last of the Swan Sivertones just record again after 35 years. " CD call, "Need More Love" CD can be heard on Gloryland.com

I read your article, and at this very present, Bless-ed records are in sessions recording the last original members dated back as far as the late sixties.