MxPx: The most popular Christian punk band of all time?

Washington's MXPX have made punk rock acceptable for a generation of Christian kids. Justin Style spoke to the band's Tom Wisnewski. 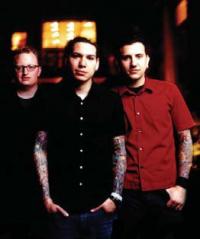 The Encyclopaedia Of Contemporary Christian Music spells it out: "MxPx is the most popular Christian punk band of all time." Although nostalgists wistfully remembering the Sex Pistols or modern punk purists wanting a harder, rawer sound might question the band's punk credentials, for most this trio from Bremerton, Washington, have led the way in offering a Christian alternative to the "melodic punk" wave ridden out by Green Day. MxPx, Mike Herrera (vocals, bass), Yuri Ruley (drums) and Tom Wisnewski (guitar), began as a bar band. Their albums, such as 'Pokinatcha' (Tooth & Nail, 1994), 'Life In General' (Tooth & Nail, 1997), 'Slowly Going The Way Of The Buffalo' (A&M, 1998) and 'The Ever Passing Moment' (Atlantic, 2000), have ensured that they've straddled both the Christian and mainstream music scenes. Asked in 1997 if MxPx was a "ministry band," Herrera replied, "I guess we're ministers in the fact that God uses us in some way, but I don't consider myself a preacher or anything."

I met up with Tom Wisnewski during the final gig of their UK tour earlier this year. I began by asking him why it was so difficult to find MxPx albums in UK record shops. "The record labels in Europe have always been able to put our stuff out. But were signing to a new label soon and we hope to get a proper release for our records in Europe."

I asked Tom if MxPx were still signed to A&M. He replied, "We are currently not signed. We left Tooth & Nail in 1997 and have been on A&M Records up until a few months ago, when we released our last album 'Before, Everything And After'. So we've been talking to other labels about a deal and hopefully we will have a new album by the end of the year.

What, I asked, has been MxPx's contribution to the scene over the years? "I don't see us as pioneers of pop punk like say the Descendents, but we influenced the new generation a little bit, with what they wanted to do."

Some critics have suggested that 'Before, Everything And After' is a musical change of direction for MxPx. Responded Tom, "I think on the new record we did want to try new things, but still kept it within the 'MxPx world'. We didn't necessarily always want to have records go up, but just have different songs and have the record move a little."

Tom has been out on the road with MxPx a long time. "We started the band when I was 15. Definitely being in the band at such an early age we had moments where we were, like, if everyone just shuts up for the next three hours in the van then we might be okay. It never got as bad as to us nearly quitting the band, just a lot of quarrelling, but you know we got over it. If you're in a band for this long you end up like brothers."

Tom commented on MxPx's change of lyrical approach down the years. "When we were younger and more inexperienced as songwriters we were a lot more blatant about our faith in our lyrics. But we have since matured to a stage where we feel that we can be a lot more subtle." One of the outstanding songs on their latest album is "Kings Of Hollywood". Said Tom, "It is just a fun, bassdriven kind of song that we came up with whilst we were sitting around in the studio, and we kept just adding stuff to it. The story is just basically about us during the last album's production, where we would drive around Hollywood in my cousin's old convertible, having a good time." Tom's favourite on the project is "Play It Loud". "It's a fun song to play. We had some a bunch of friends, who are all girls (Halo Friendlies) sing on it and it sounds like a children's choir. It's a cool song to play live. We also had some cool keyboard parts on it too."

Responding to the criticisms they've received from uptight believers unhappy about MxPx's perceived lack of evangelistic zeal Tom commented, "People are going to call us whatever they're going to call us, but we know who we are, we've explained it many times before and on our website, and if people still don't get it then hey. We will talk about our faith. It's not a secret. It's who we are."

MxPx is one of the greatest Christian bands ever for two reasons. 1. They are outspoken about their faith. They don't care if anyone makes fun of them,

For more on MxPx visit the MxPx artist profile