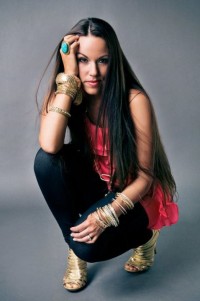 Beckah Shae is well known to Cross Rhythms radio listeners for her turntable hits like "No More", "Forgiveness" and "Faith, Hope & Love", all from her 2010 Dove Award-nominated album 'Life' while more recently her catchy single "Put Your Love Glasses On" also received mucho airplay. So the announcement that Beckah is about to release a meditative worship album will come as something of a surprise. Writing about her forthcoming album 'Rest' Beckah said, "'Rest' has been a dream of mine for over seven years and I am extremely excited to get it into your listening ears and thirsty souls! I would describe the sound as calm, serene, relaxing, ambient, tranquil, with a heartbeat. There is movement and stillness at the same time. It is a very different sound from my other projects. Every album I release reflects the season I'm walking and growing in. This one has definitely been one of rest.

"As a woman, I have many roles to play: wife to my favourite blessing and best husband on the planet; mother to two beautiful history makers Joy (five) and Grace (three); daughter; friend; minister and songstress to the world; passionate advocate and activist of truth and justice; the list goes on. I'm an avid facebooker, twitterer, instagrammer and blogger. When I'm not travelling, doing interviews, writing or recording songs, cooking my family breakfast, lunch or dinner, doing laundry, going to church, or sending cards and gifts to all my long distance family and friends, date night with my hub or coffee with a friend, keeping up with fashion, zumba-ing or taking my girls to preschool, ballet or bike riding, I am trying to finish writing a book and find greater ways to make a difference and change the world. I have learned how easy it is to engage in multitasks and be swallowed by overwork, especially when I have the nice intention of being excellent in whatever it is I do to honour Yeshua. My life gets so busy by the end of the day, I'm happy if I'm home so I can just go to bed.

"In this past season of my life, I've never been more sure of how important it is to REST. I had literally worked myself until I was physically sick. I had sleepless nights, horrendous acne breakouts, migraines, achy muscles and been left hoarse or with no voice at all. I was void of all strength and could do nothing but cry. Sad to say, but it was in this moment that God could finally get me to slow down and be still. It took this moment to remind me of the place I used to know so well and I knew I needed to be." 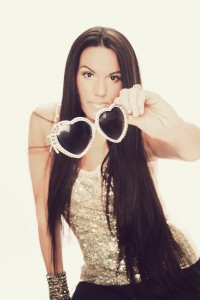 Beckah spoke about her early life to broadcaster Mike Rimmer. "I came from a Jewish family. My mom was saved before I was born - praise the Lord - she has five brothers and sisters, and she was saved. She introduced me to Jesus when I was very young. I grew up around my family in the Jewish traditions, then she took me to Sunday School. She prayed with me every night in the name of Jesus. I really believe that I had a really personal encounter with the Lord at a young age. My mom on the other hand also made some very poor choices in her life. As a result of that, she was re-married three times, to not the greatest men on Earth. We had to walk through a lot of turmoil because of it. I had to see a lot of violence - unhealthy atmospheres. Thank you so much, Lord, for your mercy, because he kept me through that entire time. I wasn't touched physically or sexually abused, which is an absolute miracle. But I did see a lot, and I experienced a lot.

"During those times, we had to move around so much: we lived in friends' houses, family members' houses. My mom would have this forgiving heart, she would go back into the situation, and then realise it was dangerous, come out, and then go back into the situation, and come out. We were always constantly moving all around. We stayed in battered women shelters for periods of time; we stayed in hotels; there were times where I stayed in foster care. During those times when I was really lonely or scared as a young kid, Jesus literally was my security, my everything - he was my comfort, my safe place, he was my best friend. I consider that a blessing. I know so many people who have known the Lord all their life, as far as being involved in a church, yet never got to experience actual personal relationship with him. That was something I developed at a very young age. The challenge that I had to face was during my teen years. Because I had lacked such stability in my younger years, I'd never had the mentors, I never had the stability, I never was planted in one church, so I never had the understanding how much I needed God, how to really walk with him. When I got to high school, and the third husband was the end, I went off and did the wrong things, unpleasing to the Lord. I had that area of my life, which, when I finally came back, I had so much to be thankful for as far as his mercy and definitely his grace. Now I'm walking free." 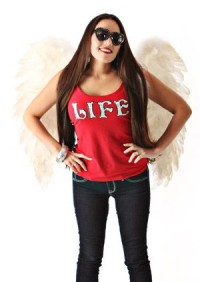 Beckah is married to top Nashville producer Jack 'Shock' Shocklee who, as well as Beckah's albums on their own Shae Shoc label, has produced for such CCM high fliers as Toby Mac and Group 1 Crew. Beckah's CDs 'Butterfly' (2006), 'Joy' (2008), 'Emmanuel' (2009), 'Life' (2010), 'Destiny' (2011) and 'Scripture Snacks Vol 1' (2011) have shown that Beckah has a strong R&B influence coupled with Top 40 influences taking in everyone from Lady Gaga to Katy Perry. Beckah's lyrics, though, could hardly be further from the gratuitous wares of some pop culture icons. She said, "I've spent time researching the artists and lyrics to the songs topping the charts, because I'm interested in what is being released and received by this generation; and I found myself feeling physically sick afterward. What one generation tolerates, the next embraces, and I will not be held accountable for being silent about the things that I know are offensive and harmful not only to God but also to my children."

Now with 'Rest' Beckah's music takes on a quieter, more reflective direction. "I've learned rest is a necessity. In order for me to keep pouring out, I must first position myself to be filled. With all that I have to do, I cannot afford not to rest. Even Jesus would get up very early in the morning and go to the wilderness alone to pray (Mark 1:35)! He needed quiet times with the Father. How many of us truly, purposefully put aside and prioritise this time with God consistently as we should and need? I believe that if we order our days first, in God's presence, we will watch the desires of our hearts be fulfilled. The most important thing we can do as a Christian is rest in his presence. With him we can let every question and concern fade away knowing that he's in us, with us, for us and loves us. You see, I've learned that when I enjoy the Lord first, I find the grace and strength to complete my assignment and run the race without striving.

"It is my desire that this project sets an atmosphere for your time of devotion and intimacy with the Lord. That intimate 'you and him' time, that 'place' where you can wrestle, cry, wait and listen. May he speak to you, comfort you and strengthen you. May he take you away from the opinions of men and noise of this life to REST in his unchanging truth and everlasting peace that surpasses all understanding, where you can believe him for all things. May he lead you beside the still waters to a place where there is no fear for tomorrow because you're embraced with grace by the very one who holds it."

I see that you're very busy all the time. Bless the Lord that he gives you strength to do it all. I wish you God's blessing. Good Luck!