What did BEN OKAFOR find when he went to play in South Africa? 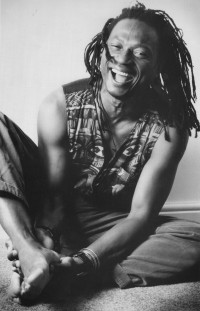 Ben Okafor recently returned from a successful visit to Soweto, where he worked with Caesar Molebatsi of Youth Alive Ministries. As well as securing a deal with a white South African label, he got through a lot of TV and radio work, as well as gigs, festivals, workshops and producing other artists. He'll go back many times. From Nigeria to Britain to South Africa is a journey worth hearing about.

"I grew up in a place where we were colonised by the British and when I was very young Nigeria had independence. To grow up there and see myself as someone who could become head of state or a high court judge - all the role models looked like me. They were all black. To be like them was something I could aim for without having to think about the psychology of it.

"Then to come to Britain was an eye-opener. The experience of black children in the schools was terrible. There was nothing about their roots to tell them they could have better jobs than those their parents had. I had to tell my daughter, 'God made you black and it wasn't a joke. He actually likes it and people who can't cope with it don't understand what God has done.' Then I went to South Africa and saw that the differences were even clearer. The barriers were even bigger because it was law that people are different because of the colour of their skin.

Britain was like a middle ground where it's possible but not really allowed. In South Africa, it was definitely out. So to go from Nigeria to Britain to South Africa was a serious culture shock!

"And it made me so angry. What on earth are these children growing up to? And what on earth are we doing about it? These problems won't go away until we're willing to do something about it. I just feel that what God feels for people should be made known to everyone."