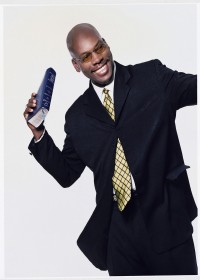 The man who saunters across the lobby dressed in American sportswear and carrying a black case holding either an electronic keyboard or a large firearm makes yours truly (a modest six foot two) feel decidedly lacking in inches. Fortunately, he exudes not a hint of menace, but laid-back bonhomie. "Come on over to the piano" he says, "I think better with my fingers on the keys."

So that is where we conduct the interview, with Ben on the piano stool answering my questions with a direct gaze while his fingers, apparently unconnected to his body, wander around the keys of the lobby grand in cocktail jazz fashion. He smiles a lot. It says something for the relationship in the last years of the 20th century between hotel lobbies and that once most bohemian of music forms that scarcely anyone looks up as he begins to play.

Ben is best known in this country for his jazz-fusion, mainly instrumental album Keynote Speaker' released on US gospel label Tribute Records and distributed here by Travail. In America he is building a reputation as a producer, a live performer and as one of the hottest crossover acts in the gospel field. His career has not been without its unconventional episodes however. It all started predictably enough...

"My father was a pastor in the church and I've always been in the church and into music, but it wasn't keyboards, it was the drums. When I got into Junior High School I changed over to the tuba. By the time was in my last year in High School I was graded number three tuba player in the States. I made the Ail-American Band and all that jazz -1 won quite a few scholarships through my tuba playing and also through basketball. I'm six foot five, so..."

Basketball too - is there no end to the man's talents? But it still doesn't explain how he ended up as a jazz keyboard player.

"Although I was raised in the church I wasn't a Christian. When I became a Christian in my last years at college was when I received the gift of keyboard playing - it kind of went hand in hand. As soon as I made a commitment to become a strong Christian God seemed to reward me. I'd never played the keyboards - but I just sat down in church and started playing as if I knew everything I was doing. It's like you woke up one morning and found you could speak 40 languages, it was that dramatic. To play like I am now without having played before - it was just coming to my mind, it was God-given."

With college over, keyboard playing gift or no, the young musician needed to take care of business and find a way of earning a living. His choice of career was an unusual one for an aspiring gospel artist.

"I'd been majoring in criminology as well as music so I ended up being a private detective for a while in Tallahassee, Florida. Following peoples' husbands, mostly domestic stuff. It got kind of boring -nothing exciting like you see on the television - no guns, no fun!" He affects the voice of an hysterical Southern housewife. "My husband's playing around on me, I want you to follow him!" 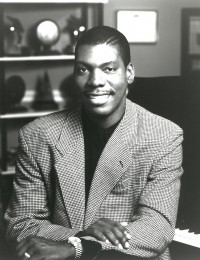 Fortunately for lovers of Ben's brand of instrumental music, the 'tec job remained so dull and lacking in small-arms fire that he remained in one piece long enough to land a position in another, more suitable form of employment.

"I was fortunate enough to get a job at a music store and through working there I was able to acquire musical equipment at a greatly reduced rate. Pretty soon I had my own home studio - people would come in to do demos and pretty soon I was making more doing that at night than I was making in the day, so I quit the store and started working full-time recording and I upgraded the equipment as I made more money. Pretty soon I had enough to make my own record, which is how I made 'All Keyed UP' (his first album, so far un-released in Britain).

"I sold 'All Keyed Up' out of the trunk of my car for a year going to conventions and functions until I was approached by record companies and asked them to listen to it but I couldn't get any response, so I sold it myself. When they saw it was selling they were more interested."

"The ideal situation is let's say The Winans or Take 6 are playing for a contemporary audience. The Ben Tankard Band open with a 45 minute set just to get the audience mellowed out. Being instrumental we don't threaten any other vocal artist, so a lot of artists request us to open for them. I've a/so worked as a backing musician with people like Vanessa Bell Armstrong and Lynette Hawkins - in fact I'm flying back to do a national TV show with Lynette next week."

Ben's music is crossing over very strongly onto mainstream radio in America and he feels that all that prevents him from having the kind of media profile enjoyed by the Winans or Take 6 is his lack of a major distribution deal.

"My songs don't have a lot of Jesus in them because I'm not a very preachy kind of person. I'm more of a caressing," my brother I love you, you can live a clean life without drugs' type of thing rather than ' you're going to hell if you don't come to church with me.' I don't have that type of ministry! Actually there's been a great response to what I do because people hear singing alt the time. A lot of times it's time just to sit back and be quiet and meditate and digest what you've heard the preacher say or somebody sing. Vocal music forces you to pay attention to what they're saying - it's hard to relax when somebody's screamin' and yellin' in your ear.

"Some gospel people actually feel convicted that they go to a jazz section of the record store and buy secular artists. They buy Ben Tankard and they feel O.K. I'm the Christian's excuse to buy jazz! What do I think about that attitude? No other word for it, it's just ignorance. A 'C is a 'C'" (he demonstrates on the piano). "This is a gospel 'C and this is a secular 'C! It's the same note. What I try to emphasise is that jazz is not a religion; it's just a style. I don't beat 'em up about it. A lot of times I'll stand out doing the traditional stuff and once they like me I'll slide into the jazz thing and before they know it they're just grooving and I'm like 'ah ha, caught ya! You got to be diplomatic, you know.'"

As well as recording and performing his own work, Ben is in demand as a producer, having worked recently with Chronicles and rising gospel talent Yolanda Adams (described by some as the gospel Whitney Houston) who's second album came straight in on the Billboard gospel chart at number 30 the week we spoke. Projects coming up include an album with Derek Brinkley and a gospel-jazz-instrumental album with highly regarded jazz pianist Ramsey Lewis. Not only that, but Tribute Records have appointed him vice-president of their black gospel division. As he puts it, he's "label head during the week, an artist at weekends and a producer at night." As he's married with two children and another on the way I wondered if he ever got time to see his family. "It's very demanding - but it's a good balance though. When the kids are getting a bit loud it's time to head out of town and when I start to miss 'em its time to head back!" A particularly complex chord emphasises the joke and its author continues to smile, an obviously happy man. Play it again, Ben.