Bernie & Sharon Armstrong: Getting The Message of "Lord, We Ask For Your Protection"

In our regular series, BERNIE & SHARON ARMSTRONG explains the thinking and theology behind their song "Lord, We Ask For Your Protection" 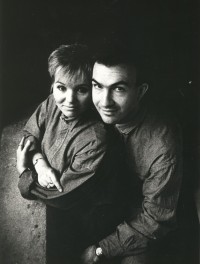 11 years...quite a while in Christian music. Some people still remember New Beginnings. We toured, made records. A lot of songwriting and two children later, Sharon and I are finding life busier than ever. "When do you find the time to write songs?" friends ask. "When do you find the time to sleep?" comes the reply. With the two youngest members of your family being of the nocturnal variety a little nacht music perhaps? As a computer broker and a father of two, I find that in some respects writing songs is similar to spending time with God. I cherish the times when I can sit down and take time to be in God's presence but find that more often than not I'm praying on the move or similarly writing a line and humming a melody in my head in odd moments, as I go about my daily business. This song came about as-a result of a phone call from my wife Sharon, to the office last year.

Early in August a close friend of ours, Kate, was involved in a serious road accident resulting in severe injuries and concussion. This news came as a shock to our congregation, especially as only a few weeks before we had been praying for the recovery from major heart surgery of Kate's father, Martin, who is our Vicar. Subsequently, I wrote down my thoughts, which had begun, "Lord, we ask for your protection, as we live our earthly lives..." This in turn became the song, which echoed the prayers that we at St. Stephens had been praying for Martin and Kate.

We first introduced the song at the evening service on the Sunday before the Gulf War broke out in January 1991. and realised then that the song was taking on a new significance.

God is indeed 'Reigning Sovereign' over all of us as we look to him from day to day, no matter what each day may bring, we can be assured of his promise that 'underneath us all are the everlasting arms' (Deuteronomy 33 v 27).

Later that year we were asked to lead the music at Kate's wedding, at which we played "Lord We Ask For Your Protection". Although the song had already been recorded for Word UK's 'Heart Of Worship' project without a second verse, we set to work on an additional verse for the wedding, which now seems to make the song complete. Most of our songs are a joint collaboration of ideas, although the original idea will have been written by one of us and then played to the other for a constructive critique. Lyrics and melody lines are then fashioned into songs, having been changed and revised, often over a long period of time, which we will then try out on an unsuspecting congregation, and then wait for the feedback. Having played a song in a worship setting, eg, in a service or a house meeting, it may not have been received as well as we were hoping for: a melody line, metre, key or tempo may need altering to gulf the abilities of the congregation. By the time the songs reach the general public they should certainly have been well tried and tested.

Lord, We Ask For Your Protection
Words and music by Bernie and Sharon Armstrong