Seven of the 10,000 throng gathered at Capesthorne Hall, Cheshire remember some of their experiences

Maxine Cummings 3.40pm
I'm after a copy of the old Switchfoot album 'Nothing Is Sound' and find a pile of them in the Merch tent for the bargain price of Â£10.00. Definitely one for the car.

Tony Cummings 4:08pm
I've been waiting for Mary Mary to sing "Shackles" and I, along with thousands more, am delighted when it comes. I'm also overwhelmed by the sheer power of Erica and Tina's preaching. These aren't rehearsed introductions between songs. This is full on gospel preaching under the Spirit's anointing.

Tony Cummings 4:59pm
In truth I didn't particularly care for the Abrams' big label debut EP - too generic country-tinged pop rock for me - but their joyful persona and all round stage craft of their Tearfund Tea Tent set is nothing short of sensational. An ancient song, apparently sung at an early Big Church Day Out and brought back into their set by special request is dazzling. "Five Loaves And Two Fishes" has always been a great song since The Sego Brothers & Naomi first cut it back in the '60s. In the Abrams' expert hands it becomes an uplifting musical tale of the miraculous with delicious Appalachian-style harmonies and then to cap it off they do an exhilarating run through of Charlie Daniels' "The Devil Came Down From Georgia" with each band member taking a solo with James showing he can not only bow his trusty fiddle but can also pluck it like a tiny guitar. A brilliant close met with a standing ovation.

Rob Thompson 5:25pm
Casting Crowns are obviously enjoying their Main Stage set. Many of their gems like "Until The Whole World Hears" and "Glorious Day" pound full blast from the stage and in between Mark Hall, having explained that this band of million-selling pop rockers are a team of youth workers, shares some of his testimony including how as a youth he could hardly read because of dyslexia but how with the Lord's help he now reads Scripture every day.

Tony Cummings 5:35pm
Although we're on our way to the Tearfund Tea Tent I can't resist a quick word with those wonderful alternative folk rockers Speak, Brother. Earlier in the afternoon they'd played a set on the Illuminate Stage. Disappointingly they tell me I'll have to wait another year before their full length album is released.

Rob Thompson 6:10pm
The food at BCDO North is outstanding. I tuck into two German sausages and even consider going back for a third. 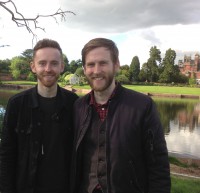 James Abrams, musician 6:15pm
We're from Canada and play a lot in the States. But here in the UK John and I find that people are so enthusiastic about live music and we appreciate that so dearly. We find that when we come and play our brand of energetic and uplifting music, people just get involved, they wanna dance, they wanna get up, they wanna sing. That's something that we do see at other places but here at Big Church Day Out it's just so amplified, people are so engaged. People want to participate, they want to be involved and it's such a family atmosphere here, people absolutely get the idea of community.

John Abrams, musician 6:16pm
I think what's really special about Big Church Day Out is that people really come here for something bigger than themselves. They're here to celebrate something that's bigger than even all of us here, and that really starts to energise the crowd in a way - it's not just energy, it's a special kind of energy. That's the beautiful thing about coming to a show like this that's very anchored in faith but also has a sense of congregation, a sense of community and connectedness.

Marian Thompson 6:17pm
While my son is getting a drink from the Bazaar cafÃ©, I have a chat with Kathy who is volunteering on the stand for CAP (Christians Against Poverty). She is so passionate about their work and has been helped by the charity herself. She tells me she wouldn't be here without them. I'm really uplifted by the chat and her enthusiasm. We finish with a hug.

Maxine Cummings 7:05pm
I call into the Craft stall. They've got some jewelry making supplies but I'm after some swivel hooks. They kindly sell me four.

Rob Thompson 7:10pm
These Christian road dogs Newsboys are in fine form and their hits roll out from Main Stage with all the class of a well-tuned music machine. Michael Tait leaps into the audience to shake hands with a few of the heaving, dancing thousands. He also tells us that a God's Not Dead 3 is in the pipeline. I'm back behind the sound desk so my view is somewhat obscured by some kids playing with a beach ball. But the bonhomie Newsboys spread is contagious and I overcome any grumpiness. 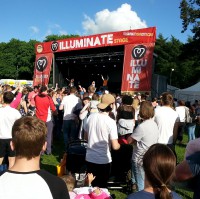 Tony Cummings 7:17pm
Clutching a bag of donuts I have just purchased and already partially consumed I bump into Les Moir, the record producer and executive whose fine history of the worship movement Missing Jewel has recently been published. Clearly he still knows where the action is.

Tony Cummings 7:23pm
I sit watching Andy Mineo playing the Illuminate Stage and though an ever-growing queue at the fish and chips van eventually obscures my view I'm impressed with his witty and powerful flows and high energy stage presence. I'm waiting for his killer cut and yes, here it comes at the close of his set, the bawled "You Can't Stop Me". Probably in the history of hip-hop no one has come up with a better shouted hook.

Marian Thompson 8:25pm
There's something absolutely exhilarating about dancing in worship and though I'm 78 that's what I find myself doing as Rend Collective rock and reel us through their classic songs like "Burn Like A Star" and "My Lighthouse". I've come to be lifted up and with God's help I have been.

Tony Cummings 9:10pm
The Main Stage set by Hillsong's Reuben Morgan starts off well and gets better. The Torwalts' "Holy Spirit" does indeed see the Spirit pervading the atmosphere. Then the sudden and unexpected appearance of LZ7's Lindz West adding a rap to an electro praise number is truly uplifting and shows that Reuben and his fellow Hillsong worshippers have long escaped the stadium rock stylistic straitjacket that once threatened their development. But soon thoughts of stylistic niceties are being swept aside by the tangible presence of God. This is true worship and thousands of festival-goers are joyfully entering into communion with God. Long before Pete Greig comes back on stage to give a preach and appeal I am convinced once again that the Lord is doing something very, very special at the Big Church Day Out and the dates for BCDO North 2018's event have already gone into my diary.