One of the most popular figures in the world Church today is Bishop T D JAKES. Tony Cummings reports.

The rise and rise of Bishop T D Jakes is undoubtedly one of the biggest phenomena to hit the American Church for decades. Here is a figure who has crossed cultural and racial boundaries to become a preacher watched by millions on worldwide Christian TV, an author with a seemingly endless stream of bestsellers and the "artist" on a shoal of hugely popular gospel CDs. Clearly the charismatic bishop has a passion for music. "Music is such a powerful universal language that transcends denominations and cultures. One of my goals has always been to be a bridge between races and cultures and denominations. Music is a wonderful way to bridge the gaps that exist in our society."

One of the fruits of that vision is The Storm Is Over', the first album on Dexterity Sounds, the label Jakes formed with EMI Gospel. An uplifting and joyful collection, 'Storm' was recorded over two nights in December 2000 at Jakes' newly constructed 8,000-seat Potter's House church in Dallas, Texas.

In addition to the critically acclaimed Potter's House Mass Choir, the recording featured such special guests as gospel powerhouse Donnie McClurkin and renowned vocalist Beverly Crawford. "All across the country people are having worship services without the object of worship being there, because they never really invite him in," Steve Lawrence, associate producer of the album, explains."

This particular project is meant to be a musical expression of what the Potter's House is all about," Jakes asserts. "To a person who has watched the Potter's House on TV or read our books, they will hear that message put to music." "Our church is like a little New York City," says Lawrence. "You know how they call New York a melting pot? Here you will experience people who come from every walk of life, every ethnicity, every social class." Jakes is a leader in using the arts to deliver his hopeful message. His nationally-touring stage production, Woman Thou Art Loosed, reached out to women who had survived sexual abuse and domestic violence. The play became one of the hottest tickets on the theatre circuit its first year, playing to more than 250,000 people, while the 'Woman Thou Art Loosed' CD was nominated for both Grammy and Dove Awards.

Jakes' vision is to release music with real relevance to people's lives. "We have an opportunity to bring diverse music with a diverse message. It relates not only to the salvation message, but messages that focus on life skills - parenting, marriages, dealing with the totality of the Christian experience - not just the worship experience."

When Jakes, his wife Serita and an energetic staff of 50 arrived from West Virginia and set up shop on property that had previously housed televangelist WV Grant's Eagle's Nest Family Church, they probably had little idea of the worldwide impact they were going to make. The Jakeses christened their new church Potter's House - after Jeremiah's description of God as a potter who puts broken vessels back together - and the crowds started coming. Today Jakes holds three services every Sunday morning with over 23,000 faithful filling the sanctuary and the overflow room, clapping and singing and worshiping. Each Sunday, middle class crowds join men straight from prison and single mothers trying to hold a family of five together on a shoestring income. They have come to find the Lord at Potter's House.

Jakes stays busy as an author, musician and entrepreneur. He bands out another bestselling book on his laptop computer, composes tunes for this next gospel CD, meets with right hand man NatTate about the City Of Refuge (which Jakes has launched to jumpstart the strained economy of South Dallas) and cruises the web with iFriendly.com, the "family friendly" internet service provider Jakes is behind. Or, if Serita has anything to say about it, he might relax in his eight bedroom mansion with their five children.

Phyllis Tickle, religion contributor for Publishers Weekly, says Jakes is the most important phenomenon in religious publishing in recent years. "He has managed to pierce the religious bestseller lists in both secular and religious magazines," Tickle says. "For Putnam to pick him up and for the general population to pick him up is remarkable. There seems to be in TD Jakes' body of thought something that bridges ethnic differences. That he has managed to do that with commercial success is very significant."

Jakes, 42, cuts an imposing figure. (It used to be even more imposing: you can read about his 100-pound weight loss in his 1997 dieting book Lay Aside The Weight.) His stately baritone would probably get your attention if he were doing no more than reciting the Yellow Pages. But Jakes does have something to say. Though detractors have claimed that, in the words of Gertrude Stein, there is no "there" there, Jakes insists that underneath the celebrity hype is a plain, simple gospel message.

The good bishop's roots go back to West Virginia. He preached at Pentecostal churches when he could but put bread on the table by sweating out the swing shift in Charleston's Union Carbide plant. When the plant closed in 1982, he began digging ditches, still preaching when he could find a pulpit that would have him. 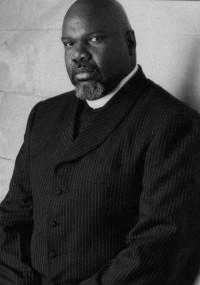 Soon, he took on a full time pastorate at Greater Emanuel Temple Of Faith, a storefront church in Montgomery, West Virginia, which relocated to Charleston in 1990. It was there, in a Sunday school class, that Jakes began to develop his trademark Woman Thou Art Loosed message.

"I was his first Woman Thou Art Loosed conference," explains Jakes' wife Serita. She enjoys telling how Jakes happened upon his ministry to women. She remembers coming home one evening early in their marriage and sinking onto the apartment floor, exhausted. "I was overwhelmed with all of the roles that I was having to take on at one time," she says. "I asked my husband to step outside our relationship and minister to me. I said, 'I need you to talk to me to help me get my head on straight and give me directions as to what I am supposed to do in life, not just as your wife. Who am I? Who is God calling me to be?'"

That conversation got Jakes thinking about women's needs and problems. "So many women are abused; their self esteem is stolen," Jakes says. So was born the most successful multi-media ministry ever targeted at womanhood.

bishop your such an exceptional preacher who is used by God in the marvellous way.therefore, through your teachings and preachings we are blessed and learn more about this kingdom of God.so please live for us and do ehat God assign you to do for the nations. amen