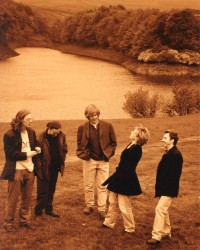 Five years of hard work, hundreds of gigs all over the country, line-up changes, yet more gigs, private cassette releases, even more gigs, the constant search for record company attention. Could be the story of almost any UK CCM band. In the case of Blessd Rain it seems that all the hard work is finally starting to pay off with two CD releases last year, one in Europe and one for a mainstream label in Britain. The band are currently in the studio yet again this summer.

I spoke to Chris Sands (guitar/mandolin) to get the story behind this Halifax five-piece and first asked him to delve into the genesis of Blessed Rain: "Originally there were two bands sharing the same rehearsal rooms, they both split and amalgamated into one," Chris explained. "We all knew each other vaguely and we got together to do a one off gig supporting Tribe Of Dan, with a different singer. The band stayed together and Jean, my wife, came in on vocals."

On now to influences. A record company flyer cites REM, Van Morrison, U2 and Bob Dylan whilst reviewers along the way have brought in comparisons to Hothouse Flowers, Deacon Blue, Beautiful South and country artists like Lucinda Williams and Rosanne Cash. I certainly found a big country influence, especially in songs like "Someone Like Me" and "Boots On", also just a hint of blues and the odd tip of the hat to our old mates Eden Burning. Chris added his own comments.

"We always fall down on this influences question," he said. "The obvious thing that people always compare us to are bands like Deacon Blue and REM. Lately we've been compared to Primal Scream, which is quite unusual, but it probably fits with the newer stuff. The influences are quite big and quite varied. Van Morrison's the one that we all agree on, like on 'Lilac Fields' especially. We're all big fans of his. Some of us like country a bit and some of us like U2 as well. We are influenced more by American bands than British bands really, we all like Counting Crows and we'd like to emulate them a bit."

A recent live demo that Chris sent me reveals the band now taking on a slightly harder edge, another band starting to veer away from the roots theme. Chris anticipates that their current studio project will further explore rockier terrain.

I was curious about the band's CD releases and asked Chris how they came into being, first the 'Conscience Of Kings' album with Belgian label It Stinks. Explained Chris, "That was from a review in Cross Rhythms. Tony (Stippelmans) wrote to us and asked us to send some stuff through which we did and he liked it and asked us if we would record some more, so we went and re-recorded them and they put it out over there which has done quite well I think."

Thanks to a distribution arrangement between It Stinks and Plankton 'Conscience Of Kings' is available in the UK, the subsequent mini-album on the Unique Gravity label has mainstream distribution through Pinnacle Records and so should be available from all major high street shops. If they haven't got it tell them to get their act together and order it. I asked Chris to expand on how the deal came about.

"Unique Gravity usually specialise in American singer songwriters," Chris duly expanded, "They had a girl on called Cindy Lee Berryhill, who's doing big things at the moment, and they've got a German all-girl band on - they're a secular label. Strange thing, one of the partners lives around this area and he saw an article on us in the paper and said, 'Send us a demo, I'd really like to hear it just out of interest,' and later he rang us back and said, 'We really like it and we'd like to put it out'."

For the release a selection of tracks from 'Conscience Of Kings' was chosen and then remastered, so why did Unique Gravity opt for a mini-album rather than a full-length release? "Basically they thought it needed focussing a bit more, and it's mainly an introduction to the band. They put it out at a low price as well to entice people to try it, it's a CD only release, retailing at around eight pounds."

Hidden at the end of the CD is a dance remix of "Cross The Line" by John O'Halloran, a friend of the band who has done mixes for several famous artists and has had four chart successes. Chris even admitted to me that he prefers it to the original and is looking forward to John's next remix of their material.

On the live circuit you are much more likely to see Blessed Rain on the secular circuit than in a church hall, they prefer it.

"Although it is initially harder to crack we have found that the response we get there is far greater than when we do the Christian circuit," Chris explained. "An example is when we played a Christian event in our home town, about 30 people turned out. The week after we played across the road from there at the local music venue and about 250 people turned up! It's also our strong belief that that is where we should be (and we get to drink Guinness while we play!)
The next studio release could well push Blessed Rain further into the forefront of music press attention, whether released with Unique Gravity or with a bigger secular label it will certainly be something to look out for.