Bloodlined Calligraphy: American metalcore with a sound written in blood

Some questions were pitched at the frontwoman for BLOODLINED CALLIGRAPHY, Ally French 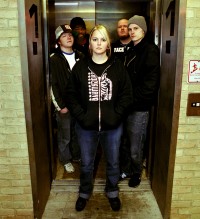 Can you give us a bit of band history?

Ally: The band actually started eight years ago under the name Friction and then they changed the name when they joined Selah Records because the label made them do it, and that was in 2001, they changed it to Bloodlined Calligraphy. They started with Erick and Carter, and then I joined eight months ago and we plan on doing this forever.

Your first release on Facedown was the EP 'The Beginning Of The End'.

Ally: Actually the EP is four songs off of a previously released full length on Selah Records called 'Say Hi To Bad Guys'. It has four songs off that where I do vocals instead of the old vocalist and then there's one new song. Basically we just got this out so we'd have something to tour with and we could make some money on the road and let the kids hear a little bit what we're about and then just build up some hype for the new full length.

How did you get signed to Facedown?

Ally: It was such a blessing. We had actually sent in a demo, the full length, for Jason to hear and he hated it. He didn't want to sign us, and that was before I was in the band. I joined and a month later we played with Sinai Beach in Detroit and Jason was there and after the show he was like, 'I want to talk with you guys about joining my label.' He basically signed us on the spot.

It's very unusual for a female to be the vocalist in a hardcore band. What's been the response to you?

Ally: Mostly good. I've been happy with it so far. A lot of people are like, "Oh my gosh, you're a girl. I thought you were a dude," and I'm like, "No, I'm really a girl." A lot of people think I use effects, but I don't even know how to use effects and I wouldn't know how if you put it in front of me. I think overall people are warming up to me being the vocalist for Bloodlined Calligraphy.