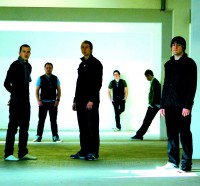 Deep respect to the guys of Bluetree! You couldn't possibly tell from the way they performed that Bluetree had been on the road since 4.30 on the Friday (Nov 21st) morning. They had travelled constantly in their blue "fun bus", arriving only 45 minutes before they burst onto the stage at 7.30 later that day at Spalding South Holland Centre. What followed filled the hearts of all present with two hours of pure energy, fun and worship that left everyone gasping for breath and just laughing with joy. The warmth of these six men from Belfast was felt by all and by the time they left to perform at the New Life Church in Lincoln on the Sunday they felt like family.

Although familiar with the tracks from their album 'Greater Things' this was the first time I had seen Bluetree in concert and was blown away by how each song became larger than life when performed live; the lyrics taking on more meaning when you watch the man who wrote them sing them from his heart. The song which has catapulted them to international attention, "God Of This City", was well received and with its prophetic resonance affected many in the crowd. But equally powerful was "Life's Noise" with its exhortation not to be distracted from the Lord by the static of the modern world. Finally "Your Love" literally brought the throng to its knees. I even have to admit that I had never had so much fun singing "Shine Jesus Shine"! I love Firefly's metal rock offering of "Seek Ye First" but Bluetree's version was just as powerful. If I had to name personal favourites I'd plump for "Each Day" and "River", but it's clear that even so early into this young band's ministry they are penning exceptional material up there with the Redmans and Tomlins. I loved the way these generous guys closed the evening by allowing half the audience to join them on stage for a final song and dance showdown - I can't believe all their equipment survived intact!

Being overwhelmed by their Spalding performance, I couldn't resist another Bluetree blast and so found myself hot-footing it with friends to Lincoln to see them at New Life Church on the Sunday before they were to drive through the night back to Belfast and work the next day! The doors opened at 7pm and a steady stream of excited fans soon filled the standing area and the balcony above. Within 30 minutes the building was awash with worship. Fun was had by all as we learnt the actions for "How Great Is The Love Of God", doing all the right moves in all the wrong places! The passion with which Bluetree pour out their love songs to Christ are compelling and joyfully exhausting - they rarely stand still! The happy, tree-painted faces of the young people at New Life Church sang their hearts out. They consumed all the energy and spirit from the worship and bounced it back again to Bluetree - a beautiful exchange of love in Christ and simply wonderful to see. For those who saw them this weekend - shout "A" for amazing!

The opinions expressed in this article are not necessarily those held by Cross Rhythms. Any expressed views were accurate at the time of publishing but may or may not reflect the views of the individuals concerned at a later date.
About Ruth Saint
Ruth Saint lives with her family in Lincolnshire and has been a volunteer helper for Cross Rhythms for several years.

Bluetree is an AWESOME worship band. We just got back today from a high school camp at Lake Cumberland Bluetree lead worship every night and gave us a concert. I was so impressed how they all took time with everyone, they spent the whole week with us playing and having fun and sharing in God's beautiful creation. Thank You Bluetree for the wonderful memories you have given my daughter and myself. God Bless you all!!!!

For more on Bluetree visit the Bluetree artist profile