Boiling Point: A song-by-song rundown of their EP 'Take Courage' 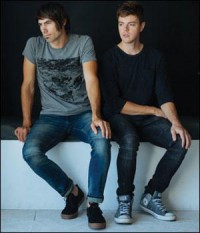 "In It To Win It"
"In It To Win It" can be summed up in that when we are writing and recording music, we think about the sum total of what we are doing in life and as a band. The song is a great way to inject energy into a concert or audience because it is just a massive anthem about committing ourselves to living a life worth the sacrifice we have all benefited from. We view our lives as an act of worship so we do our best to reflect Christ in every aspect of the everyday.

"Won't Let Go"
This is a song about the journey my wife and I made in completing the adoption of our son, Sam, from Uganda. Adoption is such a long process with so many ups and downs that you really need to commit yourself to never letting go of the people or the process. While the story ends well because we had the opportunity to adopt Sam, it is equally heartbreaking because we were also supposed to adopt a little girl and in the end, because of things that we could not control, it all fell apart. So it is always a little bittersweet to sing this song. My hope for the song would be that people would be able to put their own situation, whatever it might be, into it and declare that they will never let go. Similarly, I would hope that people might be able to see themselves in this song and reflect on the promise that God will never let go of us.

"Once Again"
Faith can be a fickle thing. One day you feel like you can beat down the gates of Hell. Other times, you are really aware of how messed up you are and just how much you, yourself, need the grace and forgiveness of Christ. This song finds us in the latter place. We are all messed up, we are all broken. It is in surrender that we find out who we are meant to be.

"To The End"
This is a song I wrote for my wife. It was a song I started to write while I was spending some time with my prospective daughter in Uganda trying to get to know her before we adopted her. I had never written a song that just declared how much better my wife and I were together and how much she meant to me. This song is my way of saying, "No matter how hard it can be at times, we will always be better together and I am in it to the end."

"My Hero"
David Zach of Remedy Drive and I have been spending quite a bit of time together lately. The main reason we decided to record this song was that I would frequently hear the conversations that I have with David resonating in my head -conversations about ordinary people tearing a corner off the darkness and doing extraordinary things because they chose to make a difference. Equally, we are part of a faith tradition that celebrates a "communion of saints." That is to say, somebody had to come before us in faith and also had to share that faith with us for us to become the people we are. For me, these people were my parents, grandparents, youth workers and friends. All played a part in my faith journey. This song, to me, is a nod to ordinary people making a huge difference in the lives of people they know and, perhaps, people they don't. We can all be heroes, in a sense. And maybe it is time to take that word back because more often than not, we call the wrong people heroes.