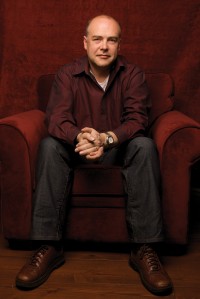 Brian Doerksen is one of the best known worship leaders and songwriters in the World Church. Many of his songs, including "Come, Now Is The Time To Worship", "Faithful One" and "Refiner's Fire", are a central part of the worship in thousands of churches. He lives in Canada with his wife and six children in the home he grew up in, but still looks back fondly on his time in London in the '90s. He has now branched out from songwriting to pen his first book Make Love, Make War (published by David C Cook) and he has also just finished a new musical, Prodigal God, which is due to premiere in 2010. I managed to break into his busy schedule to ask him a few questions about the book and began by asking him about the intriguing title.

Clem: Make Love, Make War is a strange title for a book by a confirmed pacifist. What's behind it?

Brian: The title comes from a puzzling picture I had in the middle of worship at our local church. I saw what looked like one of the scenes from the hippie movement; young people holding up a sign that read: MAKE LOVE NOT WAR . . . and as I watched, the sign morphed to become: MAKE LOVE MAKE WAR . . . and now it was no longer young people holding the sign . . . it was Jesus. It got me thinking that everything going on around us and inside us is all about LOVE (just like the hippies, we often focus on the wrong kind of love) and WAR.

For some reason - a clever strategy of our arch enemy I'm sure! - our modern world tries to reduce our calling to be nice, which doesn't work so well in a universe that is in open rebellion with its Creator! It's true that I was raised a pacifist (one of the Anabaptist groups - the Mennonite Brethren) but I do believe that God gives governments the sword to restrain evil. Sadly that power is so often brutally abused. But this book is not about politics and pacifism; it's about our personal calling to be worshippers.

Clem: You've included songwriting tips at the end of each chapter, so is this a book just for worship leaders or is it for a wider audience?

Brian: It's for a wide audience of people who want to know more about what a life of worship looks like. It's full of stories - stories from my life as I have pressed into knowing God . . . and stories from our family and raising our six children including some with special needs. I share how and why my worship songs were written and what was going on in my life that led me to write songs like "Come Now Is The Time To Worship'.

It's also a book of conversational theology - I take people behind the songs to explore the theological foundations of a life of worship. We wrestled with where to put the songwriting tips - at one point it was in the back - but I felt like it would serve the worship leaders and songwriters better by connecting them to the song they emerged from.

Clem: In the book you say, "Becoming a worshipper means becoming a warrior". Some people might have a problem coming to terms with this so what do you mean by it?

Brian: Becoming a warrior is not about putting on some body paint and screaming as loud as you can! It's about doing whatever God gives us to do in the power of the Holy Spirit. I am a shy, thoughtful and creative person - and so one of the things I have learned is that God anoints all of us with different ways to invite and invoke the presence of God into the middle of any situation. I happen to do that as I sing and make music. But the call to be a worshipping warrior is not for a few who can sing and play a musical instrument; it's for everyone!

Clem: We have had the 'intimacy' songs and the 'justice' songs recently but is the church ready to enter a period of 'warfare' in its worship again; is that what the Spirit is saying to the churches?

Brian: There is a great need for songs that stir our hearts in the battle . . . and to awaken our hearts to battle. BUT . . . I actually believe that often it's singing something like "Purify My Heart". God's ways in warfare are not the world's ways - and so God's warriors are chosen based on purity of heart, not for the size of their muscles.

Clem: How different have you found the process of writing a book to that of writing songs?

Brian: When you write a song you gather up all the Scriptures and information on a certain theme and then you try and reduce it to a few key phrases that you can sing. Writing a book is almost the opposite - you now have some breathing room. The real challenge is over a period of time to keep focusing what you are saying - without getting too repetitive. It was actually my wife Joyce's idea to use 12 of my songs as the structure - shaping each chapter around one of my songs. It was a real learning and invigorating experience and I still have much to learn. I hope I get a chance to do it again sometime!

Clem: You're a proud Canadian so how do you feel when people refer to you as an American worship leader/songwriter?