The new BRIDE album 'Snakes In The Playground' is a withering denouncement of the calamitous condition of urban America. Tony Cummings charts Bride's history. 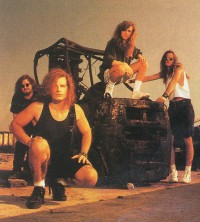 It was American journalist Brian Q Newcomb who summed the prevalent attitude towards Bride.

"Until last year's 'Kinetic Faith' it had been pretty easy to dismiss Bride. The band on three successive Pure Metal releases smacked of metal wannabes who cannibalised mainstream metal songs for its music while regurgitating stock revivalist rhetoric to the converted rebellious 16 year old males who thought Petra was 'mellow'."

Things have certainly changed for Bride. Their 'Kinetic Faith' was a thumping US success, even earning the band a 1992 Dove Award in the Recorded Metal Song category for the song. "Everybody Knows My Name" while their hot new album 'Snakes In The Playground' is already receiving enthusiastic reviews and big Christian radio airplay in the US. What intrigued a lot of fans were the confusing reports that Bride's lead singer and songwriter Dale Thompson had joined Stryper after the departure from that supergroup of Michael Sweet. It's hard to get to the bottom of precisely what happened. What can be established is that in 1992, on the momentum of 'Kinetic Faith's' success, Bride were asked to open for Stryper on a number of US concerts and that immediately after Michael Sweet's departure Dale Thompson deputised for the singer. The band suggested it become a permanent arrangement.

"At first the thought of joining Stryper had crossed my mind. I told the band that they had offered it to me and I told Robert (Sweet) that I was going to pray about it and come out and do those shows and see what I felt about it," Dale Thompson told America's CCM magazine.

"Even before I made it out there, it was already in the press that I was their permanent singer and then Oz basically announced it from the stage, which put me on the spot. Before I left California to start work on our new album I told Robert that I was still not sure. And he said 'you go and do the album and see what you think about it'."

Ultimately Dale remained committed to the band he'd formed in California with brother Troy back in 1986. Bride emerged out of an earlier Thompson aggregation Matrix. Troy Thompson recalled his and his brother's earliest musical involvement.

"We started off playing music when I was seven and Dale was nine. We were called The Hillgy Lads and I played the violin and Dale played the guitar. We had two cousins in the band, and we went around from church to church and sang old Southern gospel tunes. I played violin and cello all throughout high school."

"After listening to Rez Band, Dale got linked up with a local Christian musician named Billy Sutherland, who already knew how to play rock and roll," recalled Troy.

"He kind of showed Dale the basics. Dale played with him for a year then said, 'Well, I've learned enough'. He wouldn't let Dale sing. They didn't think he could sing rock at the time ... So he broke off with them and we formed Matrix in '83. We've been at this for years and years now." Things were not always good spiritually for Dale.

"I was raised in a Methodist church and went to church every Sunday for 12 to 14 years. Then we started going to a Full Gospel Pentecostal Church. There I went, like, three times a week to that and two to three different prayer meetings a week, and I became like a fanatic. I couldn't see any fault in myself. I was finding fault in everyone around me. I guess by the time I turned 26 I was getting exhausted trying to keep up with everybody's standards. I started going to church less and less and less."

Eventually Dale got himself sorted out spiritually. But when Bride came to the attention of the fledgling Pure Metal Records run by Ray Nenow there was hardly an enthusiastic response from the church he attended.

"They supported you as a Christian but they wouldn't support your music. Our first three albums were done just because we had faith in God and we were doing it ourselves with virtually no help from the record company and no help from the church, so it was just whatever faith we could obtain as children that kept us going - our faith in God, praying and seeking God."

The albums Bride recorded for Pure Metal/Refuge 'Show No Mercy ('87), 'Live To Die' ('88) and 'Silence Is Madness' ('89) were popular albums in the growing white metal underground and took on board elements of thrash metal as well as more straight ahead metal. But changes were afoot.

For more on Bride visit the Bride artist profile