Britt Nicole: The American hitmaker looks back over her career so far 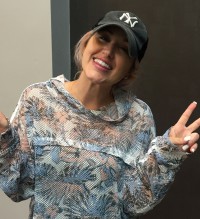 When in 2007 pop singer Britt Nicole stepped into the Nashville Christian music world, she was tipped by CCM Magazine as being the "next big thing". As it turned out, such a statement was to prove almost prophetic as by 2013, Britt was experiencing a major crossover hit. Now married and soon to have her third child, the award-winning singer was recently in the UK to play the Big Church Day Out events. She found the time to speak to Cross Rhythms and take a backwards glance at the albums she has so far released.

"I don't normally listen to my music, by myself. I'm not, like, jamming out in my home to my own songs. But today, funnily enough, I was searching for music on my phone on the plane and I saw a song from 'Say It', my very first record. I wrote a song on that record called 'Don't Worry Now', and that was about my parent's divorce. I moved to Nashville when I was 19 years old. I had never really received real healing from my parent's divorce when I was seven, and I don't really think I knew what that was, but when I moved [to Nashville], I was at a church service actually and I went down the front. I didn't really know why I was going down, I just felt this pull to kinda go down. I started crying right when I walked down to the stage, and as they were praying, this woman walked up to me and said, 'Do you feel like you have unforgiveness in your heart?' and I said, 'No I don't think so.' That's how I responded right away, 'No I don't think so', but I'm just, like, crying. As soon as I said that, I saw pictures in my mind of my parents and things that we had walked through as a family, and I started to share that with her. I said, 'Wait a minute,' and she said a very interesting thing, nothing like this had ever happened to me, but she said, 'I would like to take the place of your mom today and just say I'm sorry for everything.' Then her husband came up and said, 'I can take the place of your dad,' and I just cried. It was just really a time of healing and me just making a conscious choice to say, 'I forgive. I was holding onto some things that hurt me as a child, and I'm choosing today to let go.' So in that moment God brought real freedom that I'd never felt, and I went from feeling almost like a heaviness to laughing and this new joy.

"When I first moved to Nashville I met with several producers and songwriters and they would always say, 'What are you listening to? Who do you want to sound like. . .' I don't want to sound like anybody, I want to sound like me! I knew what they were meaning, they wanted some ideas of what I liked. But it was a time of trying some different things, and going, oh, this is what I really like, and kind of listening to artists from the UK, and some pop music and Britain's Lily Allen. I remember liking the sound of her music. It was definitely a fun record to try some different things. I still love that record; I think it was a good one."

"I remember doing the record and the producers, again, asking me 'What are you listening to?', and I was trying to give so many references: I like her, I like this album. But then during the making of 'The Lost Get Found' I decided that I wasn't going to listen to anything but worship music. I just wanted to take a season and fill my heart and my mind with no pop music, nothing but complete worship. So I really felt I had nothing to pull from, except from Creator God. That's the best place to pull from. He's the ultimate creator, and he is a genius. So I said, I'm just listening to worship music and going to see what God supernaturally gives me creatively. I think in that, I sank a little deeper into who I was as a person and as an artist, and just became more confident in what I liked and what I wanted to do."

"A lot of my fans were always saying, 'I love it when you sing live. I like it better than I like it on your record.' I think that live experience was very raw and real. There wasn't anything covering. Because I make pop music, there's a lot of sounds, there's a lot of things going on, on the track. And so we said, let's just pull it all away, and let's give the fans something that's more intimate and just about my voice. They seemed to really enjoy that, at least the real super fans did."

"It's funny because my mom used to sing a song to me when I was a little girl, actually when my parents were walking through everything they were going through, the last line of the song was 'You shall come forth as gold.' And she's saying that to me as a child. It was so funny because the song 'Gold' that I wrote, it took a couple of weeks to write, and every time I would go to the studio I was actually going through a hard time. I had been dating the man who was to become my husband for five years, we dated six years total. He played drums for me, we were on the road together, and we had broken up. I was very sad. I went to the studio to work and I told my producer I just want to go home, I don't have anything to say. And he said do you mind if we take some time to pray, and I said sure; that would be awesome. So we did, and one minute of prayer turned into three days of prayer. We kept coming back to the studio to work, and every time we would go to put pen to paper God would meet us and we would start praying, and nothing like that ever happened in the studio that was that strong. We kept working and working, and 'Gold' came out of that. One of the guys I was working with said, as we were praying, 'Britt, I just want to remind you that you're the apple of God's eye,' and in that season of feeling down and discouraged, I started crying. I said, 'I know that's true but I just don't feel like it some days. There's got to be other people like me who feel like that, so let's write a song reminding them who they are.' 'Gold' came from that. It was a song that took a lot of time, and a lot of prayer, and God really used it in an amazing way.

"In the States, that record actually crossed over from the Christian music box that it was in to mainstream. I did a pop radio tour, and it went to number 28, I think, in the pop charts. We started to see a lot of success, so many people responding. Even now when I sing it people come alive, and it's like something in their hearts just kind of goes 'Yes! That is who I am; I am worth more than gold'. By that point I had worked with a lot of different songwriters, a lot of producers, and I think I had found a handful of people by that time. I had moved to Nashville when I was 19, had been there for several years. I found this group of people that I thought OK, these are my people. I want to write with Jason Ingram, Dan Mukala, my husband was a producer and a songwriter. There were about five people that I knew were people I wanted to work with, and we had this chemistry, me and that group, to create something really good."

"My husband did a lot of the remixes. Then people like Dan Mukala, who produced 'The Son Is Rising', did a remix. Then there were people like Jason Nevins and Capital Kings did remixes." 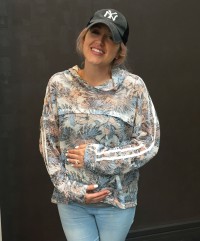 "My husband was the one who said you should make this self-titled. I thought, that seems a little odd, I've been out for a while, but it felt right. We looked for a title on the record that stood out, and to say this record is the record, and there wasn't a song that really represented the entire record. Then I thought there's a song on here about my kids, 'All Day', about being a mom and having to be away, which was really hard. There were a couple of songs on there about my husband, newly married, and there were songs on there about my friends. I felt there were these little snippets of my entire life, and I decided to call it 'Britt Nicole' and say 'This is me.' So it's good. I still like that now being a wife and a mom - I'm expecting my third, I don't know if you knew that. . . six months pregnant, I'm due in September with another boy, I feel like I'm in a bit of a transition. I will continue to make music. We'll see where God leads and take a little break with the baby in September and we'll go from there. But I think it's funny that the record was called 'Britt Nicole' because it summed up a full season of my life. My name is Brittany Nicole Crosby now, I signed as Brittany Waddell to Capitol when I was 21. They asked me would I be able to change my name, and I tried some different names, and I said that feels weird, I can't change any. But I said my middle name is Nicole, so let's just go by Britt Nicole. But I feel like it almost summed up a season of my life, and I'm kind of ready to see what's next in this idyll. I'll keep making pop music or I'll transition into something different. We'll see."