Brokenfor: The still youthful pop rockers pointing to "The Winner" 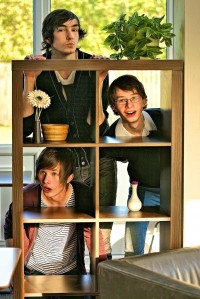 With their song "The Winner" about to go on the Cross Rhythms playlist now seemed a good moment to talk to the young pop rock band from Norwich, Brokenfor. The band's lead singer and guitarist Ben Lawrence spoke about "The Winner" from Brokenfor's 'It's Not Me, You Are' EP. "The story behind 'The Winner' is quite a personal one to me. I came home on a Thursday evening after our church youth group and I can't quite remember the circumstances that led to it (like normal), but somehow a fight spawned in our household. Inevitably there was some shouting and so eventually I walked off and hid in our front room. I remember sitting there thinking 'this isn't fair!' and went through the motions of anger, then remorse for what had happened and I ended up saying to God, 'I want to win, but I can't because you've already won. I'm not the winner, you are.' I kept repeating that in my head until I realised that I needed to write a song and so I did. The chorus came almost straight away while I was still sitting alone, so I walked up stairs and picked up an old Stratocaster that I use to write with occasionally. In silence I wrote the chorus words and the song came alive that night. The rest of the song took awhile to come but I knew that I wanted it to be a song that explained who we are as a band. We can try our hardest to be the 'next big thing' and be a successful and popular band but actually all we need to do is point to the one who's already won. You can't take the gold medal off the guy who's already won the race, so why try and take the glory from God?"

Despite their appearance Brokenfor have clocked up quite a bit of gigging and recording experience. Said bass player Dan Lawrence, somewhat ruefully, "Usually when we are asked how long we have been together people either say 'really?!' or 'you look too young to have been going that long!' We've been a band for around nine years now (I will pause for a moment for the shock to dissipate...) and started off playing music together every Friday evening in our church, learning worship songs and trying to write our own material as well. The original lineup included my brother Ben Lawrence on guitars and vocals, me on bass (and later backing vocals, synth, piano, glockenspiel, cheese-sticks and harmonica), Dicky Baxter on drums and Johnny Horth on drums as well. We didn't really have a 'style' of music, we just played what we thought sounded like music. Turns out, it didn't. Needless to say practises were noisy with two drummers and the lack of experience, however Johnny left about two years after we formed. Then someone said we should lead worship in our church's morning service. It went kinda well, however some of the congregation's ears probably didn't recover until 2006 when we released a CD called 'Higher' which was a self-recorded EP. A year later we released 'The Demos', another self-recorded EP and later that year a Christmas three-track called 'O Holy Night' featuring some covers of classic Christmassy tunes. We have never released another Christmas CD and hopefully never will..."

Dan continued, "You may have noticed I skimmed quickly over our first releases - we're not embarrassed by them, we understand that we were young and were still discovering our musical abilities. However, by 2010 we were working harder on our own material and sound and released another self-recorded EP entitled 'As Surely As I Breathe' which featured our best material up to then and featured such tracks as 'Climb' and 'Is Love What We're Searching For'. We still play at least one of them per set usually, they have a nice folk feel to them now-a-days. I think that when we first started out as a band we didn't really know why we were playing and writing the music we were, we just knew we wanted to and that somewhere down the line maybe the purpose of it would be revealed. As we grew in maturity and spirituality we became more aware of our purpose in our local church and in the wider UK Christian scene. Recently we've been involved in lots of youth work and youth outreach, all of us spend some of our hours doing youth work and we've felt a real want and need to write music this last year and a bit that connects with young people and tells them about Jesus, his character and how he can effect our lives and theirs. This is in a sense why we take more influence from secular musicians than perhaps other Christian artists."

The general consensus is that the 'It's Not Me, You Are' EP is by far Brokenfor's best recording. Ben spoke about the journey leading up to its release. "Back in summer 2010 we were all thinking 'what direction do we go in now?' We knew we wanted to start using more keyboard sounds and we knew that with time we could push ourselves and improve. So for six months we experimented and played about with new sounds and new lyrical ideas. At the end of that we came out with this sound that was sort of inspired by every band we'd been listening to for the past half a year. Bands like [dweeb], Two Door Cinema Club and Passion Pit. With all these new songs we decided that we should pump a bit of money into them, so we hooked up with Chris and Sanj from Hi-Sonorous to produce the EP. Only Dicky has a car currently so Dan and I had to beg our parents to drive the eight hour round trip to Southampton (twice) to get to the studio. We spent six days over two weeks recording with Chris and Sanj. We actually stayed with Chris and his wife Lorna for most of that time which was really fun! Like every studio session time there was lots of downtime for the two of us who weren't recording so I suppose they were the most memorable bits. We invented our own ways of entertaining ourselves by reading Where's Stig books and recording our video diary."

Ben spoke about 'It's Not Me, You Are''s arresting title. "We went to the studio without a title for the project, it was just called 'EP 2' because we couldn't find the perfect title. We never like naming our projects after a single song and we wanted it to be a bit quirky and something where people would go 'eh?'. So we spent a while talking it over and praying about it and settled on this lyric from the song 'The Winner'. The whole EP project had been a long one up to that point and we just wanted to give back to God what he'd given us, so we picked a title that pointed to him being the reason for what we do. It's not about us, it's about him."