Brooke Robertson: Overcoming painful past to "take her voice back" 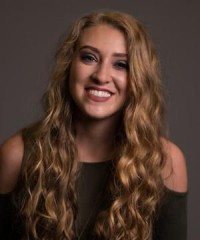 On the 27th March 2020, Burtonwood Records will be releasing the debut album, 'Taking My Voice Back', by the country-tinged pop singer from Louisiana, Brooke Robertson. It's a very good one; in fact two songs, "Just Be You" and "Wait And See", have already been chosen for both the Cross Rhythms and xRhythms playlists. The centrepiece of 'Taking My Voice Back' is the title track. The song is the first time Brooke has shared her story as a victim of childhood sexual abuse. Harbouring her pain for years, writing the song proved a therapeutic process as Robertson was ultimately able to forgive her abuser.

The singer/songwriter admitted, "It was something I promised myself I would never talk about, and for 15 years I was numb to it. As I was writing the song, I felt in my heart that I needed to contact my abuser. I was able to tell that person I forgave them, and that God forgives and loves them too. To be able to share Jesus with someone who hurt me was something I didn't even know I needed. I thought all these years I was okay, but there was a deeper healing in store for me, and God knew that. No matter what someone has been through, I hope 'Taking My Voice Back' can help them find healing."

Brooke's musical journey began in 2016 when a friend of hers, Luke Ducour, asked her to do some recording with him. She remembered, "At first, when he asked me if I wanted to start recording in his home studio, my response was. . . 'I'm not good enough'. He eventually convinced me to give it a try. Well, from there we continued to work in the studio and make videos, but I was not fully committed. I was in school, and I had intentions on going to graduate school. I had my life planned out. . . At least, I thought I did. I was 'comfortable'. Anything that seemed like a risk really did not make sense to me at the time."

Brooke and Ducour continued putting songs and videos together. She explained, "For about a year, I continued to work in the studio while at the same time applying to schools. No matter how many times I took the entry test, I couldn't pass it. I applied to schools and they denied me. I was confused. I didn't know what God wanted me to do. I didn't want to accept the fact that maybe my plan for school was not going to happen. It took me to feel broken and confused to finally let it all go and give my everything to God. I prayed, 'I want what you want, God'. I felt at such peace that I can't really explain.

"A couple of months after surrendering everything, a man who is now my producer, Jeremy Holderfield, noticed a video that I posted on Facebook. He contacted me about writing original music. I wasn't expecting God to move that quickly, but did it wake me up! I had a lot of praying to do. I had to trust that this was God, and that he is placing these opportunities in my path for a reason. Trusting led me to writing my own original music, recording my very first EP, and filming a music video. Did it make sense at the time to go to Tennessee and write music? No. . . But the trust I had with God was so strong that I could not turn it away."

Nashville's Burtonwood Records released Brooke's debut EP, 'Have My Heart', in August 2018. Described as a "worship-infused pop project", it featured four songs all co-written by Robertson and Seventh Day Slumber's Jeremy Holderfield. Prior to its release Brooke said, "It's my desire that people will find hope and draw closer to Jesus when they hear these songs. I want to encourage others to rely on God's plans and not their own. The journey of discovering God's purpose for your life is something I think we can all relate to, and I believe with my whole heart that true joy is found when you give everything over to him."

Now, her full-length debut is set to build on the interest created by Brooke's EP. As well as the deeply personal title track, other highlights on 'Taking My Voice Back' are "Purpose For The Pain", inspired by a health crisis Robertson's mother faced during her pregnancy with the artist; "Why Are You Waiting", a duet with Dove Award-winning Building 429 frontman Jason Roy; and the tender closing track, "See You Here", a tribute to Robertson's grandmother, featuring her singer/songwriter Burtonwood Records labelmate and childhood friend, Nathan Sheridan.

Said Brooke, "I hope this album will help others feel empowered and encouraged to let hurt go, extend forgiveness and fully embrace who God created them to be. I want people to find freedom from their hurt and pain and walk into the calling God has for their lives."