Brought Into Being: Speaking truth through gutsy Foo Fighter-style rock

With far too many of the current crop of British bands going for the easy option of modern worship music it's heartening to see Somerset's Brought Into Being bursting onto the scene. The band - who name such musical influences as Foo Fighters, Biffy Clyro and Dream Theatro - have a burning desire to go out into the world with the Gospel. They have a showcase gig at Gateway Church in Yeovil on 10th March where they will be playing songs from their impressive debut album on Risen Records, 'The Game'. Cross Rhythms threw a batch of questions at the band. Frontman 22 year old Joe Hardy spoke about BIB's raison d'etre. "Our vision is very simply to speak truth over those who have lies spoken over them all the time. We long to see something of Jesus revealed wherever we play to whoever we play, through our music actions and words."

Consisting of Joe Hardy (vocals, guitar), Chris Moore (drums), Dan Bramley (keys), Jamie McSeveney (bass, backing vocals) and Nick Hogben (guitar - though he's now left the band), most of Brought Into Being have been playing together in different contexts for about five years. Explained 20 year old Chris Moore, "Most of us were in a band called Third Wheel up until the summer of 2008. We formed through a youth work team called Urban Warriors based at our church in Yeovil, through an organisation called SWYM (South West Youth Ministries). We formed to work in schools, youth groups, prisons, etc, going around using our music to share the Gospel. We were a five piece for the duration of the album and everything up until that point, but Nick left us last year."

After recording a number of demos BIB recorded their own Christmas song for the 2009 holiday season and then in early 2010 recorded "Chain Reaction" as a single, producing it themselves. But it was linking up with groundbreaking Risen Records, the West Country independent responsible for giving [dweeb] a leg up with their 'It Came From Outer Space' album and home to such acts as Bosh and Brother John which was key in getting Brought Into Being to the next level. Explained 22 year old Jaime McSeveney, "We connected with Risen Records through a few different means; we knew a few members as friends for quite a while and had played a couple of gigs with some Risen Records bands. As the label is run by members of some of the bands they had seen us play, knew what our vision is. Through that we were invited to go to and meet with them and be a part of them."

Recording 'The Game' left quite an impression on 20 year old Dan Bramley. "I remember not eating very much at G2 studios. We were cooking for ourselves and we kept forgetting to eat - we would record all day and then realise we hadn't eaten." Joe added, "For me the most vivid memory is leaving the majority of the vocal tracks to the last day, in hindsight one of the silliest things to do. It got to the point where it was 11.30 at night, I had been recording vocals all day, I was unable to talk and holding back throwing up between takes. Lessons have been learnt!" 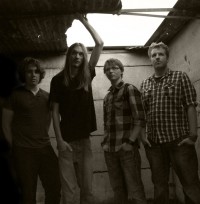 Joe spoke about the title track. "I had been playing with the idea of treating life like a game, how we interact with people, how we make choices, etc. It was something I was already thinking about as the name for the album before the song even existed. It was not planned to be in the album, but while we were in the studio we started bouncing out some ideas from nearly two years before and before we knew it 'The Game' was born. It feels like it sums up the whole album to me!"

Another powerful track on the project is "Chain Reaction". Said Jamie, "I wrote the lyrics to this song during a band practise. I can remember it because we were all really fired up and raring to go but not just musically, for God too. At the time I felt this was the most passionate that I had personally felt for our ministry so far and through that came the lyrics for this song."

Now the album is done and dusted the band are gigging as hard as they can. Joe spoke about Brought Into Being's on-the-road experiences. "We have played a lot of memorable gigs, ones where we have played to hundreds of people, some where we have driven for seven hours to play to eight! But I think one of my most memorable was one of our first gigs as Brought Into Being. We were playing in a school in Exmouth during lunch; we set up and sound checked before the lunch break and the hall was right in the middle of the school so everyone could hear it and were buzzing. So when the doors opened hundreds of people flooded into this hall and we rocked out as hard as we could!"

There will be more rocking hard to come. As Dan reported. "We are in the middle of organising a tour with Empire Nation through Ministry Of Music all through the spring, and we hope to play as many festivals as we can throughout the summer."

And as well as Foo Fighter-style riffing audiences can expect some unflinching spiritual ministry. And that ministry dimension extends far beyond a gig. Said Joe, "We see our ministry as bigger than just the gigs, so we connect with our fans and followers through Facebook, Twitter, our new website as much as we can. And we hope that our album will carry on revealing something of Jesus when people are listening to it at home."