IONA's Dave Bainbridge dips into a particularly deep reservoir of memories and selects five key moments for the maestros of Celtic musicianship.

1. SEEING THE BOOK OF KELLS 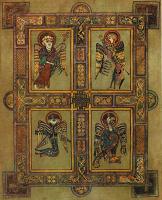 When David Fitzgerald and I first set foot on the island of Iona back in 1989, we both had a tremendous sense that this was a special place, not just because of its rugged beauty, but also because of its spiritual heritage and atmosphere. Standing for the first time on the white sands where a number of monks were slaughtered by Viking invaders, or on top of Iona's only hill Dun'I at sunset, retracing Columba's steps around the island, all brought to life events we had only previously read about on our quest to discover the roots of our Christian faith in these Isles.

Another tangible link for us both to that early Celtic Church on Iona was first seeing the Book Of Kells in Trinity College library in Dublin. This eighth century illuminated manuscript of the four gospels, and the inspiration for Iona's second album, really spoke to me about our society's obsession with the "quick fix". It also spoke to me about the nature and purpose of art. It is estimated that the illustrators and calligraphers responsible for the Book Of Kells must have spent 30 years of their lives on its creation. 30 years! Imagine spending that long on an album! And the reason they did this was in order to glorify God through their artistic gifts - no financial gain or heightening of their status. In fact, working on something so intricate, which one commentator a few centuries later described as the work of an angel, must have been very, very difficult in an unheated, dimly lit stone cell on a windswept Scottish Isle in the eighth century! 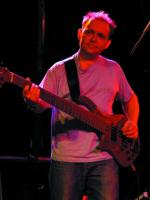 It is amazing how God interweaves the tapestry of our lives so intricately. It was on Lindisfarne, the windswept island off the coast of North East England, that David Fitzgerald first heard the call to discover what those ancient Celtic saints had to teach us, living as we do in today's materialistic, chaotic, noisy world. At the same time, a close friend of mine Andy Raine, whom I'd lost contact with for several years, was also independently discovering the richness and simplicity of our Celtic Christian heritage and with others of like mind was setting up the Northumbria Christian Community. After several years off the island, Andy moved back to Lindisfarne around 1992 and we are now again in regular touch.

My first experience of Lindisfarne dates back to a trip there when I was 10 and even then I recall that there was something very memorable about the priory ruins and the atmosphere of the place. In such places as Iona and Lindisfarne it has been said that the veil between Heaven and earth is particularly thin. Certainly spending time alone on Lindisfarne when the tide is in and the tourists have left, I have had that experience. The prayers of Aidan and Cuthbert resonate still. Northumbria has become a very special place for me and my family.

One particularly memorable event was playing in the priory ruins with Iona in 1995 - a concert that was staged and filmed by the BBC. I'd love to return one day to play a full evening concert there with Iona.

3. PLAYING LIVE WITH THE BAND 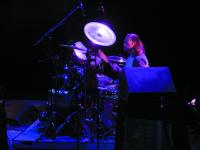 I love playing live music - the atmosphere and interaction with the audience is something that can't be replicated listening at home to a CD. Our 1996 US tour captured some of those particularly unique moments. One night on the tour we headlined at Cornerstone Festival in front of 20,000 people. As it was the 4th of July Troy and I quickly put together a version of "The Star Spangled Banner" for keyboards and uilleann pipes - which went down a treat. During our encore of the hymn tune "When I Survey", the silences in the music were punctuated by fireworks going off - not planned but very emotive!

Music is the most amazingly unifying art form that I believe can at times dissolve the barriers that (through breaking our relationship with God) we have erected between the physical and spiritual realms. On the same US tour we played a disastrously organised concert in a church in Virginia Beach playing in front of about 50 people (this was after a 10 hour drive to get there!). Despite (maybe because of) the difficulties, God really blessed the concert. After a particularly incredible improvised jam at the end of "When I Survey", I was surprised when no applause followed. I looked up (I'd been playing with my eyes closed) to discover that many of the audience were on their knees silently worshipping God! At the same concert, during "The Reels", Jo was trying to get this guy up to dance - but he vehemently declined, despite her persistence. It was only after the concert, when the lights were on that she realised that he was actually in a wheelchair and had a broken leg!

There are so many other memorable moments from Iona concerts. For example listening to a man after one gig saying that in 30 years of seeing live music he'd never experienced what he'd experienced that night. He wasn't a Christian, but sensed it was God's presence.

Our 1992 tour of Estonia was very humbling and sobering, meeting many people who had suffered under the Communist occupation. One concert in the capital city Tallinn was in a church that up until only a year earlier had been the Estonian Communist Party headquarters.

4. PLAYING AT THE ROYAL FESTIVAL HALL WITH THE ALL SOULS ORCHESTRA 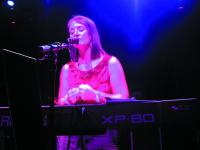 This concert, in 1999, which culminated in our 'Woven Cord' album, was the fulfillment of a dream - to work with an orchestra. Unfortunately the budget only allowed for a 34 piece chamber orchestra, rather than the 90 piece full monty, but it was a great experience nonetheless, if rather nerve-wracking! With only three sessions of three hours each with the orchestra to go through the arrangements (about 15 pieces in all), plus a couple of hours on the day of the concert, time was very tight - but conductor Noel Tredinnick steered the proceedings very well. The only hiccup came during the concert performance of "Woven Cord" when Noel's earpiece (which gave him the click track to keep the orchestra in time with the band) decided it had had enough, leaving everyone to fend for themselves! Fortunately there was enough time at the end to play the piece again, with Noel's earpiece now cooperating more fully.

5.SETTING UP OUR OWN RECORD LABEL

Since 1995 we had been considering the idea of setting up our own record label, but it was not until our current four CD box set release 'The River Flows - Anthology Volume 1' that we were able to realise this dream. We'd felt for a number of years that the record industry in general does not value its artists highly enough. I strongly believe that this is largely down to the structure and hierarchy of companies within an industry which pays generous (and regular!) wages to those in executive positions, but comparatively little to the musicians and writers that generate this income in the first place. Artists such as Iona struggle in the middle echelons of an industry that values celebrity, power, greed, short term gain, novelty and notoriety over craftsmanship, maturity, artistic integrity, care and nurturing of its artists, long term vision, originality and creativity.

Having set up Open Sky Records, we are now in a position to work with those companies whom we feel actually have a passion and vision for the band's music. Although we have almost no financial resources, I strongly believe that this is the right way to go. In the world's terms, the release of a Â£35 4 CD box set with a 60 page colour booklet as a first release for a new company is probably madness! However, to me this seemed like a good first release for Open Sky - looking back as it does to the origins of the band, but also with glimpses of what the future might hold. This in fact parallels the band's philosophy - of learning from the past how we can better live in the present.

It's been a huge step of faith for us and, as with a number of other artists, we called upon the people who love our music to share the journey with us by pre-ordering copies of 'The River Flows' so that we could use that money to help fund the making of the album. We're really grateful to those who did that and plan to do the same for our next studio album.

It's probably always going to be a struggle for Iona, given the many challenges we have faced in our own personal lives, financial restraints and the large distances we live apart from each other, but we are very much looking forward to the next step of the adventure.

I love these guys and their music. It's been wonderful to see how God has used them since I promoted their very first concert back in 1989. May God Bless all they do in the future.