Byron Cage: A Prince of Praise With Deep Gospel Roots 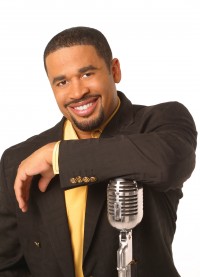 It was the release in 2003 of the 'Byron Cage' album that catapulted the worship leader of two of America's celebrated mega churches into the gospel music big time. Five Stellar awards, including Male Vocalist and CD Of The year were among the accolades heaped on Byron while his 2005 follow up 'An Invitation To Worship' has been another huge US hit for the gospel worship leader. The album was produced by PAJAM (Paul D Allen, J Moss and Walter Kearney). Byron knew that the choice of producers would raise a few eyebrows. He told journalist Andrea R Williams, "I know that a lot of people were shocked at the production of PAJAM. Most people feel that they only are able to produce urban [music] - especially with all the success they've had with Karen [Clark-Sheard] and Dorinda [Clark-Cole] and Kiki [Sheard] and a lot of secular artists. But this is a straight church album. It's completely church. The only song we could call contemporary or CCM is the song that Paul Allen, J Moss and I did, 'We Love You'. They were a tremendous team - especially Paul Allen. Paul is the 'studio-behind-the- scenes' kind of guy. He did tremendous work with me as it pertains to the overdubs and the music. It was a tremendous connection that happened between J, Paul, Walter, myself and my team. It was a great spirit. The evening was extremely anointed. A torrential rain storm came that night and a lot of people couldn't get in. In spite of that, over 6,000 were at New Birth. It was captured on video; I'm so thankful it was captured on video. People will be able to see what happened as well."

On 'An Invitation To Worship' Byron used a number of relatively unknown Washington DC composers. He commented, "Alex Williams is a fabulous writer. I pray this will open doors for him to write for some other artists as well. He did a fantastic job as did Isaiah Thomas. He did a song that I made a few changes to. It's called 'Bless The Lord'. I sang it at the Gospel Music Workshop of America in Milwaukee at the youth service; I just did the vamp. If their response is any indication of what this song will do, it will be a tremendous blessing to the body of Christ - sort of like the way the 'Presence Of The Lord' was. I know a lot of people are looking for what's that next song. I like this album better because I was really able to express my ministry of praise and worship, but at the same time, it is so in-your-face praise and worship. It's not just praise teams that will be singing these songs; choirs will be singing these songs. It's going to be music that we'll be doing for some time to come. I thank God that the DC area, where I serve locally at Ebenezer AME Church, has been very, very wonderful to me. The industry has been wonderful to me. I've just been thankful to do what I do."

Byron somehow manages to find time to lead worship at both Ebenezer AME but also at New Birth Church in Atlanta, Georgia. Speaking to Gospelflava website Byron commented about the huge demands of two church ministries. "God has given me grace to do it. It's a lot of work involved. My wife and I live in Atlanta and I work at the church in Ebenezer AME Church in Maryland. It has its challenges but I don't complain. I'm very thankful and I know how to do my schedule. The time that I have for my wife is her time. The time that I spend with Bishop Eddie Long at New Birth is his time. When I do my concerts, that's their time. Then there's the time that I spend with Ebenezer. I've kind of mastered it now in how to do my schedule. It is tiring though."

Byron cited the differences in style between the two churches. "DC, because it is so huge in politics, is more of a conservative type of place. When I first came to Ebenezer AME church, they were more traditional in their music style. I came from more of a praise and worship style. Of course, it was met with great opposition, as change always is at first. As they began to see the worth of praising and worshipping God through music at the level that I was doing it, God began to bless and people understood. Now, it's different. In Atlanta, I was blessed to be with Bishop Eddie Long when he was Rev Eddie Long and there were only 700 members when I got there. In serving him for 10 years, I watched them go from a traditional Baptist, kneel down on the chair, raise a hymn, to my style of praise and worship even back then. So the styles are really starting to become very similar. I think that DC has more of an academic approach. Richard Smallwood is such a phenomenal musician and he's been a great mentor to so many musicians in the DC area. Not saying that their sound is entirely Richard Smallwood, but you can definitely tell that it has its influence. The South sound is the big choir sound featuring strong vocal singing. You have the Dottie Peoples who have established the 'On Time God' type of phrases, which have become kind of popular for the south."

Born on 15th December 1962, Cage was raised in Detroit. Both of his parents sang and he attended the same church that the one time Motown hitmakers DeBarge family attended. The late choir conductor Donald Vails was a mentor to Cage at the time, as was Thomas Whitfield. Cage began singing in earnest as a teenager. He had lots of established artists looking out for him. He did some vocal work on Commissioned's LP 'Will You Be Ready?' Daryl Coley turned him on to a recording session that Coley could not do because he was signed to another label. The Wilmington-Chester Mass Choir's Christopher Squire introduced him to AIR Records where he started a nine-member vocal group called Purpose.

In the book Uncloudy Days: The Gospel Music Encyclopedia, Bil Carpenter wrote about Cage's early years in gospel. "For a wihle, it seemed that Cage's greatest contribution to gospel music would be as a songwriter, having written songs such as Jonathan Creer's "Count It All Joy" (1993), Wilmington-Chester Mass Choir's 'Anytime, Anywhere' (1994), Full Gospel Baptist Fellowship Mass Choir's "Yet Praise Him" (1998) and the Greater St Stephen Mass Choir's "You Are My Potion" (1999)."

Things began to change though with the release in 1994 of the Byron Cage & Purpose album 'Dwell Among Us' for AIR Gospel. But it was Byron's move from AIR Gospel to Gospo Centric which became pivotal in Cage's career. He explained, "My label wanted me to focus on the artistry of who I was. That made me dig in deeper, even as a writer. Personally, it made me feel that perhaps the label didn't feel that my songs were strong enough to be on my record. So they sought out Kurt Carr to produce it and sought various other persons. Honestly, it ticked me off and I was mad. But I listened to [label head] Vicki Latillade. She's perhaps one of the smartest women, in my view, in the industry. She's had great success, of course, with Gospo Centric and with Kirk Franklin and Kurt Carr and some of the other ones. I listened to her mad and upset. But it drove me to go and be a better writer. It drove me to go back to the drawing board and say 'simplify this, make this great.' So that's what I did."

"So when the last record came out, sold all the units that it sold and garnered the awards for Soul Train and all that stuff, she then came back to the table and said 'OK. We want to do your next record. Where are your songs?' and I had songs to give her. You know, she punched me in the arm and said 'Boy, this is what I'm talking about!' She gave me the opportunity. I really do credit a whole lot to her because she's such a smart and fair lady. She really wants her artists to do well. So sometimes, she has to give you the medicine and you don't want to take it but you know it's going to make you better."

Despite all his success, Byron remains firmly rooted in ministry. He said, "My ministry has taught me the importance of serving God's people. My first priority, of course, is honouring and serving God. Then it's serving God's people. He's taught me how to serve his people with humility, love, understanding and compassion. Without those things, you rule almost as a dictator that does not have the ability to effect people personally. You can have a lot of people that are successful when they get out in the big crowd. You need to have personal relationships where people can trust you and say good things about you. I'm not talking about the people who don't know you and say things about you. I understand that a lot of things that I deal with at this level are not about a personality but it's a principality. It's the enemy trying to attack my credibility and he can't do it. My mother told me before that God will never believe a lie. God's taught me how to love people even when it's hard. That's the lesson that I've learned. People come up to you and sometimes God quickens back in me and says, 'Calm down a bit. Don't get ahead of me. Don't be mad.' They ask for something and you sign the autographs and take the pictures. But then sometimes people can cross the line. The other side of you will want to rise up. That lets me know that I have not arrived. I may think about saying something and I stop. It quickens me because I know what God has placed in me, as I have the greater One on the inside of me. God helps me to get victory. It makes Galatians 2:20 come alive, that I'm crucified with Christ, nevertheless I live."

I'M TRYING TO FIND OUT THE NAME OF A SONG SOME
OF THE WORDS ARE,GOD CA HEAL,HE CAN DELIVER,
HE CAN HEAL YOUR BROKENESS

THE SONG IS CALLED BROKE BUT HEALED.