The current Cross Rhythms radio turntable hit "Living For The Other Side" by Capital Kings is just the tip of a creative iceberg. The duo, consisting of Jon White and Cole Walowac, have shown that their grasp of pop dance electronica is completely in tune with where current CCM is heading. In recent months they've been asked to remix songs for acts like Britt Nicole, Newsboys, Mandisa and TobyMac. Yet for all their studio wizardry Capital Kings are equally adept with live music. Intriguingly they consider their music worship music. Said Cole, "People always ask, 'You guys don't do worship music? You don't play instruments and stuff?' Music is music. I just feel like our music is worship music, too, because it always comes down to the lyrics. What are the lyrics saying and all of our lyrics are positive and they're always pointing to Christ. I think our music is technically worship. It's just a different form."

Added Jon, "We kind of do a mash-up in our set. We did it at WinterJam. We kind of fused one song with another song and another song. We sang 'Our God' by Chris Tomlin over it, and it all came together. I think that's a big song for us lately. '10,000 Reasons' is definitely a huge anthem these past few months."

Jon and Cole were brought up in Washington, DC. Despite their youth the duo's history is a lengthy one. Said Jon, "We were in the nursery in the same church. We moved away to Massachusetts for a few years; Cole and I met back up in the same middle school and we started playing in the youth group band. Cole would play drums and I would sing and that's how we started making music."

Cole spoke about their interest in club culture. "We were really interested in electronic music and were always fascinated with what deejays were doing because that was starting to get big when we were in high school. We got really into programming, just making beats. We love hip-hop music as well, so I always made beats and we just decided that one day we'd start making music that was different than a normal rock band. We just started making electronic music and beats and it just came together. It was a natural thing." 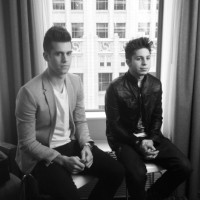 The two relocated to Franklin, Tennessee, and soon found themselves working with TobyMac. Said Jon, "Toby said, 'Hey, I've been telling people about you guys and how you guys can do remixes.' We did one for him and then all of a sudden we just kept getting calls. It came out of nowhere. It was a blessing for sure."

Since signing with Gotee Records, the duo have gained a reputation as the industry's freshest remix masters, working with some of the top artists in the industry, including TobyMac ('Eye On It', 'Dubbed & Freq'd'), Group 1 Crew ('Fearless'), Mandisa ('Remixed: Get Movin'') and Britt Nicole ('Gold').

As much as they've enjoyed working with other artists, recording their own music afforded them a whole new level of creative expression. "We have a studio in Franklin that we use and we basically go in almost everyday and write song after song after song," said Jon. "Over the past year we've developed a lot."

Enthused TobyMac prior to the release of Capital Kings' first download EP through Gotee, "It's not everyday I get to introduce Christian music fans to a group that exceeds all expectations, but that's exactly what Capital Kings is doing. Already proven studio remixers and producers, this songwriting duo makes up a new artist that will take our industry to a new chapter and inspire listeners everywhere. I can't wait for people to hear it!"

Toby's confidence has proven to be well founded and their self-titled album has brought a major infusion of energy to the rather lachrymose world of Nashville CCM. Said Jon, "This debut album has been three years in the making. We've encountered a lot of ups and downs in the previous years and this album talks about real life. 'Capital Kings' is based off electronic dance, but also fuses every style - from hip-hop to funk to house music - into one fresh sound. We have always been into so many styles of music so it's hard for us to have just one sound. We've never wanted to put limitations on our music and I think this record shows that. My favourite song on the record is 'Ready For Home'. I know in my life I have been the prodigal son. We all want to go off and do our own thing in life and in doing so, we forget where we came from. In our lives, we can't escape heartache and conflict and Christ is the only one who can help us step out of that!"

Cole's favourite song on 'Capital Kings' is "Born To Love". He said, "We were very fortunate to have our friend Britt Nicole sing on the track and she really made it a special song. 'Born To Love' is about all the hate and negativity in the world today and how we don't want to let the moment pass by where we have the opportunity to show love to someone in need." 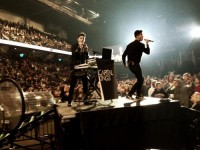 Jon called Capital Kings' association with TobyMac "an incredible blessing." He commented, "Toby's track record shows his heart and his genius behind the music he is involved with. This record would be nothing if it wasn't for the incredible producing job of him and Dave Garcia, who came alongside our original production and helped make 'Capital Kings' the record it is! We're also so happy that Britt Nicole, Royal Tailor and Soul Glow Activator of Family Force 5 collaborated with us. It definitely pushed this record to a new height by having those incredible artists be a part of it."

Christian Music Zine asked the duo what God had been teaching them in recent times. Said Cole, "Right now, he is teaching me to be obedient. Life on the road, especially as a new act, takes some getting used to and can be overwhelming and exhausting at times. But we know we have been called to this for a reason. As TobyMac would say, 'we gotta keep our eye on the prize'." Added Jon, "I've been reading 1 Corinthians 10:31 which says, 'Whether you eat or drink or whatever you do, do for the glory of God.' I pray that this verse comes through in our music and keeps our minds on the right path in our music career."

Capital Kingsâ¦ if you ever see this or get word of it, PLEASE make another album. I found you only last week, but you are already my favorite! Two thumbs up, 5 stars all the way. You are my absolute favorite and your tunes are already stuck in my head all day. I have been looking so long for clean, Christian music that I am absolutely in love with. I have been listening to Britt Nicole primarily for the past year or two, and man, she's awesome, but I almost wanted something a little jazzier. When I found you guys, I immediately looked you up and from there, I've been jamming out to your music almost everyday.
You are incredibly blessed, and may God continue to bless you forever more! Thanks for being awesome!
- Biz