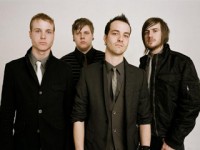 Down the years Tulsa-based band Capital Lights have gone through extreme musical changes. They have gone from being a screamo outfit to a pop punk band and, on their final release 'Rhythm 'N' Moves', have a sound that one reviewer has suggested would make Justin Bieber proud! Admitted Capital Lights frontman Bryson Phillips, "We're still power pop, but there's less power and more pop on this project. There's not as much rock as [on] the first album and it's more laid back, but we've also expanded with more styles. We're still the same band, but we put the focus on melodies without trying to be overly technical. We had a blast making the songs and we hope people have just as much fun listening."

The origins of Capital Lights go back to 2002 when vocalist Jacob Dement, guitarists Justin Lamproe and Brett Admire, drummer Jay Caudle and future lead vocalist Bryson Phillips on bass started AfterEIGHT. The band were initially only able to practise in a diner where some of the members worked, and only after 8:00 (hence the band name). Their sound was screamo utilising hard rock guitar riffs. By 2003 they had released their first EP, 'AfterEIGHT', and after drummer Jay Caudle left the group, to be replaced by Bryson Phillips' brother Michael, released a full length album, 'Better Late Than Never' on the independent Yeah Siam Records. The following month, the band played alongside several other local bands at a Cain's Ballroom show organized by local radio station KMYZ-FM, and December found the band playing at the 2006 Diversafest.

They released a self-titled EP the following year. Caudle left the band in 2005 and was replaced by Phillips' brother Michael. At the end of 2006, Dement and Lamproe left the band, resulting in Phillips switching from bass to lead vocals in January 2007 and guitarist Jonathan Williams joining around the same time. It was time for a major musical overhaul and AfterEIGHT's sound changed to the pop punk sounds of bands like Relient K. Another independent EP, 'Revival Of The Fittest', was released. The new pop punk direction attracted the attention of Seattle's renowned Tooth & Nail Records and two tracks from 'Revival Of The Fittest' were re-recorded for their T&N album debut. In February 2008 AfterEIGHT officially changed their name to Capital Lights and the band began a major US tour supporting Hawk Nelson and Run Kid Run. Their debut T&N release 'This Is An Outrage!' was produced by Aaron Sprinkle. Said Bryson at the time of the album's release, "If we hadn't first recorded with Aaron, we wouldn't have been as proud of this project because he gave us so many tips on writing, like how you shouldn't waste time in a song by making a bridge or instrumental section too long. We recorded the drums, bass and guitar at our church and the vocals, sampling and piano at my house. We would've had the record out sooner, but there was a lot of time spent on the set up and tear down! We relate all of our songs to what we're doing at the time and we wanted to put out an album for our fans that can spark memories of a good time for years to come."

With rave reviews and with the band being picked up by general market booking agent The Agency Group things looked bright for Capital Lights. But then, on 19th August 2009 Capital Lights announced on their MySpace page that they had broken up claiming that "We all felt God had different plans for our lives, and it would have been impossible to pursue those plans while continuing with the band." Despite their no longer being an active unit, on Christmas Eve of 2010, Bryson appeared on RadioU's morning show The R!OT in an interview. He announced on the behalf of the band that they had agreed with Brandon Ebel of Tooth & Nail Records to release one final album even though they are currently inactive. Bryson told Obadiah and Nikki from the show that the band would not necessarily support the album with a tour, and that the band was still in the process of writing the material. Bryson also mentioned that they would be recording in their hometown of Tulsa, Oklahoma. 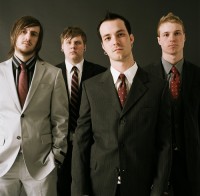 The resulting 'Rhythm 'N' Moves' album got a decidedly low key launch. Said Bryson Phillips at the time of the album's release when interviewed by noisetrend, "There actually wasn't much to it on our end. We no longer tour because we are all focused on our own careers or school. The day it released was pretty much a normal day for us other than the fact that we were all excited that the album is finally in stores! I have done a few interviews here and there and that's about the extent of it. We consider it a success!"

'Rhythn 'N' Moves' featured a surprise appearance from Hawk Nelson's Jason Dunn. Explained Bryson, "We did a big tour with Hawk Nelson in 2008 that lasted three months. We pretty much became family. After that we did other partial tours and festivals together until we broke up in mid 2009. We have always kept in touch with the Hawk guys and we get together and hang out every time they play in our town (Tulsa, Oklahoma). I just thought it'd be cool to have Jason sing with us so I texted him once and asked if he'd like to and he said he'd love to. We sent him the track and he recorded his vocal part at a friend's studio in Nashville and sent it back to us."

So does Bryson's faith influence how he writes songs? He responded, "I'd say yes, sometimes our faith will influence the way we write. Some examples are 'Gotta Have Love' and 'Honey Don't Jump' but for the most part life experiences influence the songs. All of us in the band are Christians and live by faith. But most of our songs are simply just songs. . . nothing bad but nothing spiritual. Just songs."

Did Bryson think there would be any more Capital Lights albums? "At this time we have no plans of doing another album. Of course you never know what God has planned for the future, but I believe that chapter in our life is over. We were blessed to experience it!"