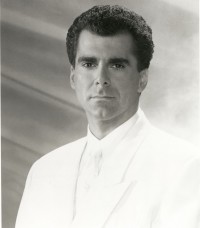 Eight pairs of eyes could each gaze at Carman yet each see a different man. To the record industry marketeer he's the biggest Grammy Award winning CCM phenomenon who, without the merest hint of crossover, sells half a million copies of an album. To the devoted throngs who cram into every Carman concert he's the Prophet courageously denouncing the spiritual strongholds that grip a nation and lifting a passionate vision of a Risen Christ. To the sophisticated CCM industry media man he's the embarrassing clown-prince bringing tent-meeting hokum, unashamed theatrics and full frontal Jesus-talk in an age of crossover compromise and expanding markets.

To the black audience he's the honorary brother who can get happy in the Spirit and bring down an anointing so that everyone has CHURCH. To the theological radical he's a wince-inducing throwback to a simpler age when demon possession was still credible and miracles were there to be prayed down. To the spiritual searcher weeping in the dark and noise of an auditorium he is the beloved evangelist who finally makes understandable the mysteries of life and death, Heaven and Hell. To the album-grooving music buff he's the ultimate enigma mixing smooth Vegas with acid rock guitars, rap attack and croon 'n' swoon.

And to the British evangelical interviewer he's the gentle-spirited man of faith utterly convinced that the paths of his extraordinary life were created before the foundation of the world.

Carman has had a fair few salvos fired at him in recent months. One organisation accused him of anti-Semitism in his video of "A Witches Invitation" while John Styll, editor/publisher of CCM magazine and board member of GMA, organiser of the Dove Awards, when reviewing Carman's new album 'Addicted To Jesus' wrote, "the implication that one should become 'addicted' to Jesus, much like one would become addicted to drugs or alcohol, is offensive - at least to me". Was, Cross Rhythms asked Carman, the singer surprised by the recent spate of criticism?

"No, not surprised," Carman replied. "I recognise that in the contemporary Christian music world it's very popular now not to talk about Jesus. You'll achieve a much greater level of success by pulling back on the J word than with a straight on gospel approach."

But wasn't he hurt by criticism emanating from within the church? "I've no problems with the church," Carman responded. "The church supports me and perceives what I do as the voice of the church. Most of the opposition and attacks I've received has been from the contemporary Christian music industry. I've got many friends and supporters within that industry. But there are others who use their power base to attack me."

What about the controversy concerning The Witches Invitation' video. "There was absolutely no anti-Semitic intent in that video," assured Carman in his lugubrious Italian-American drawl. "The real issue was that it was a bold statement against witchcraft. The Enemy tried to throw up a smoke screen to confuse the central issue. The video has been out two years and has gone gold so in someway it had already achieved its main work."

I asked Carman whether he perceived the attack on him from the patently misguided Art-Defamation League as a demonic attack. "I think that anyone under attack has to examine the source of that attack. Now if, for instance, I was slipping in some aspect of my Christian life and that was exposed it would be totally wrong to blame that on the Devil. It would be self-induced. But when something so blatant as witchcraft and a song so anti the strongholds from which witchcraft comes brings forth attacks I have a pretty good idea where those attacks are coming from."

How did this extraordinary communicator of spiritual soap operas - where demons plan their dirty schemes before cringing before a triumphant church banishing them back to Hell - respond to criticisms that his spiritual warfare songs were both over-dramatic (some would say over-the-top) and superstitious, dwelling too much on demonic activity. "In response to the criticism that some of my material is over-dramatic I would say those people don't understand the function of a pop song. It's not an expository sermon. I have three or four minutes to present a truth; I have to make a high impact. And as for concentrating unnecessarily on Hell and the demonic in my songs all I can say is that in the Scriptures Jesus spoke far more about Hell than he ever spoke about Heaven. Jesus wasn't uncomfortable to cast out demons and I think the church needs to get hold of true spiritual reality - that The Prince Of The Power Of The Air is out there and is very, very active in this world. We need to fight him, fight him in the power of our mighty and Holy God. I feel that on my records I have a responsibility to uncover evil. It's abounding in our society today - the abortion clinics, the occultists, the violence. The Devil and his demons are causing havoc and we must not shut our eyes to the fact. On our TVs today, you'll find witches, warlocks, and spiritualists. The Devil doesn't mind being talked about. But what he hates is when the name of Jesus is lifted up. That's what all my records try to do, recognise the evil and lift the Christ, the defeater of evil into his rightful position."

This extraordinary musical exponent of spiritual warfare was born Carman Dominic Licciardello in January, 1956 in Trenton, New Jersey. His mother, Nancy Licciardello, remembers dubbing him her "Jesus Boy" because he was the only one of her children born after her salvation experience in 1952. She told an American journalist, "My husband and I were young in the Lord but I remember when Dominic lifted Carman up to the Lord and dedicated him. He lifted him up above his head to God...just like Moses." Carman's mother also remembers the important role Carman's sister played in his eventual commitment to the Lord. "Nancy kept speaking blessing over him everywhere he went. She kept telling him God was going to use him."

Being an Italian-American, Carman's father was very fond of the big band crooners of the fifties. "My dad listened to a lot of singers, Frank Sinatra, Jerry Vale, lots more...and he made me listen! Music kinda took a hold." Carman's mother fronted an all-girl group and her son would regularly fill in on guitar and drums. After a brief stint in the obligatory bar band, doing renditions of "Daddy's Home" while patrons threw beer bottles, Carman embarked on the showbiz road as nightclub singer, eventually working the Vegas circuit. But the Big Break remained frustratingly elusive and the tawdry lifestyle of the showbiz ladder bottom rung eventually brought depression and drove the would-be Wayne Newton home to the bosom of his family. In 1976 Carman Licciardello's life experienced a 180-degree turn. Carman's sister took him to the annual Night Of Joy show at Disneyland featuring Andrae Crouch. "It was an awesome experience," he recalls. "I felt the presence of the Lord in a way I could really relate to. Andrae had a way of incorporating the whole rich experience of his church life into the music he was doing, which was very modern and relevant for me at that time. There was spontaneity, an uninhibited kind of worship. I could actually feel God. I didn't understand much, but I knew that feeling was real."

With the characteristic zeal of the new believer, Carman immediately turned his back on singing and began to look for more respectable ways to earn a buck. A series of odd jobs, including installing cesspools, brought him to the brink of desperation. "I tried getting back into singing," he admits, "but every time I got a job, I got physically ill. I knew that God didn't want me back in the clubs."

Finally, Carman found himself working in an upholstery shop. He drove his workmates mad listening to ministry tapes. In 1980, Carman was ready to make his first tentative steps into the foreign world of Christian music. He made a privately produced custom album 'God's Not Finished With Me' and with backing tapes began appearing at a few concerts around New Jersey. "I just started getting more and more requests for concerts," Carman remembers. "Pretty soon, I didn't have any time to upholster."

In the summer of 1981 in a showcase concert in the Rockies, Carman met Bill Gaither, the father figure of American CCM, whose middle of the road praise team The Bill Gaither Trio had inspired a whole generation. Gaither liked the fledgling singer and soon Carman was touring with the gospel veteran as opening act. The big gospel music break appeared to happen soon afterwards. Carman was signed to CBS, who had startled the Christian music world by announcing a Beg Buck move into gospel music with the launch of Priority Records. Carman was signed to Priority and three albums were duly released in a flurry of full colour adverts. "I remember sitting in the Beverly. Hills Hotel, ordering peanut butter milkshakes and having them served in these tall, elegant glasses and thinking that I'd really arrived... I hadn't." Nor, for that matter, had Priority. The company went belly up, CBS never understanding the marketing complexities of selling albums to Christians. When Priority folded Carman seemed to be washed up.

You are a weapon in the hand of God, keep up the good work we need more of this. I WAS WATCHING TBN SPECIAL yesterday (03/11/2012) Powerful. May God continue to pour His anointing on you in Jesus name , amen

I've always loved the music of Carman. Recently I popped in an old tape while on my treadmill, I had a revival! Is Carman still doing concerts? We need God in America again, more now than ever. Thank you so much for your ministry

Carmen, an annoited man of God, will lay crowns at the Feet of Jesus. He had led many to Christ Jesus that the critical church could never reach.

May God Bless him AND ALL who suppot him!