Carman: The "spiritual militant" with a new album

With his new album 'R.I.O.T.' (Righteous Invasion Of Truth) about to soar high in America's CCM chart, Cross Rhythms spoke to CARMAN, the man whose musical attacks on spiritual strongholds and principalities has struck a chord with American evangelicalism but made his music anathema to the post evangelical. Tony Cummings reports. 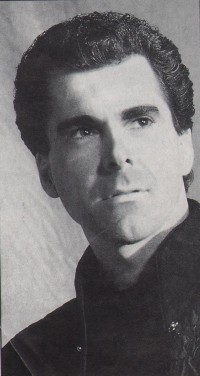 Spiritual militancy. Those opposed to the principles of the Kingdom, both within the world and the Church, view spiritual militancy as an ugly, shallow sloganeering movement inspired by right wing politics, mindless adherence to the Bible, and questionable spiritual experience. In truth, the Church Militant is the body of believers beginning to fulfil its supernaturally imbued walk of faith by taking ground for God rather than capitulating to the sins and strongholds inherent in a godless world system.

No musician has come to represent a virile, muscled spiritual militancy more publicly than Carman. Down the years while all around him Christian bands and soloists have compromised, pulling back on the J-word and going out of their way to project a politically correct faith, Carman has constantly stood on the corns of those who find charismatic evangelicalism embarrassing. Anti-abortion statements and exhortations to wage war against demons, anger against the prayer-blocking mechanisms of a secular society and passionate calls to worship, Carman's music and ministry is the antithesis of those who want their religion neat, tidy, unemotional and unconfrontational. His righteous indignancy at a culture locked in satanic strategies and an often powerless and worldly Church has struck an emphatic chord with America's evangelicals. Carman has become the mouthpiece for hundreds of thousands of churchgoers rising to the call that it's time to fight back. His music, a bewilderingly eclectic fusion, appeals to both teenagers and mums and dads while his passion for truth remains infectious and consistent.

Back in 1993 when Cross Rhythms last spoke to Carman we wrote about "the Grammy Award winning CCM phenomenon who, without the merest hint of crossover, sells half a million copies of an album." Since then that sales figure has undoubtedly gone up a couple more notches. Also since then, Carman's record company Sparrow has been sold to EMI; the singer's 'The Standard' tour has broken all kinds of attendance records; and now Carman's hot-from-the-CD-plant 'R.I.O.T.' will undoubtedly ensure the pop/R&B/rap/MOR/big band jazz/ rock/gospel superstar conquers new audiences with his unique musical synthesis. Cross Rhythms spoke to Carman at the Stouffer Hotel, Nashville.

When you last visited the UK you did a number of large concerts. Was the audiences' reaction very different or fairly typical to what you get over here in the States?

"Well, specifically in London when we went to the Hammersmith Odeon I was surprised at how quickly they welcomed me because usually as an artist overseas it takes a little while before they feel comfortable with you because they've heard your records but never seen you. But I specifically remember that from the moment I came out and did the first song or two they were just ready to go. It was just like I had been there for years. I was taken aback by how warmly they not just received me but were ready to worship the Lord with the music. I remember coming out and doing the first song and then the second song and it just seemed like they wanted to continue on to worship. Usually what happens between songs is they'll clap but then all stop at the same time. But they almost knew that I was there for a purpose that was way beyond just doing a concert and they wanted to worship the Lord, so I was very pleased."

Since you were in the UK you've played some pretty huge concerts in various countries. Can you give us any highlights?

'The Standard' was a big success. What response did it get from people?

"I think of all the songs on 'The Standard' that have got response most likely the song 'America Again' has gotten the response because it talked about a country that used to have very strong biblical values and all the benefits that that did for the country and then when we turned away from that all the terrible things that have taken place in our land because of our lack of wanting to follow God's word. The Scripture says that righteousness exalts a nation but sin is a disgrace to any people and I think that it is an object lesson not just for my country but for other countries as well. How well you are doing can be gauged by how you take God's word, not only instilling it in your private life but in public life and the way in which a country is run."

"Well, 'R.I.O.T.' actually stands for Righteous Invasion Of Truth. This is what we seek to do as Christians, to bring a righteous invasion of truth into our community, 'R.I.O.T.' into our homes, our schools. I looked up riot in the Webster's English Dictionary and it says that a riot is like an unrestrained uproar in a public place, turbulent, making a difference. That's what we seek to do. Sometimes I see a negative word like 'radical' or 'addicted' which has a very negative association and I turn it around for the positive. I did it with 'Radically Saved' and I did it with 'Addicted To Jesus' and now I'm doing a similar thing with 'RIOT'. People associate the word 'addicted' with drugs but you can be addicted to Jesus and God's word. The Scripture takes something that was negative, like slavery, and says now we are bond slaves to the Lord Jesus Christ. So even Scripture can take a negative word and turn it around to be positive, just like what the Lord does with our lives. He makes all the negative things of the past and uses all things for good for those who love the Lord God and are called according to his purpose. So there is a very strong biblical principle going on there."

What issues do you tackle within the album?

"Well, let me think. There's a song called 'No Monsters' which talks about watching TV or going to see a movie and it's a scary movie, it's evil, demonic things are taking place and you go home that night and don't realise there are spirits attached to those things and you're lying in your bed, hearing noises, seeing shadows move and then you realise that something has come from that movie to visit you personally and you realise that this is a spiritual battle and in the name of Jesus you stand up and say 'I don't want no monsters in my house tonight.' It's a kind of fun song at the same time. We have another song called 'Seven Ways To Praise' and it takes the seven Hebrew words from the Old Testament that are interpreted as one word 'praise', but have seven completely different meanings, and seven different expressions and we put it in sort of a techno beat sound."

You also have a series of videos called Time 2 which are available in the UK. Can you explain what they are and what they're designed to do?

"I don't know if you have these shows over in the UK but in America we have shows like Heart Copy Current Affairs, 10 20, where they take a topic and will do interviews, on location sometimes. There's a show called Unsolved Mysteries where they script out something that happened and then do theatre. Time 2 is a very similar type of show but we've added music videos and live musical performances to it. Each show has its own different theme but everything that happens in the show centres around that theme, like single parent families or drug abuse or high school evangelism, or witnessing to the cults. So whatever the topic is we'll build the show around that. Each one of the shows has a drama skit or a comedy skit relating to the topic then a concert, music video, then a live performance from a Christian artist and on location interviews. Then we have an author or speaker come into the studio and we interview them concerning the topic.

Then I open the Word of God at the end and give a brief summary of what we've been talking about and break it down to its simplest form and give real simple basic scriptural antidotes for that particular topic. It's a great option as a Bible study because you're really going through the Scripture concerning a particular topic, plus it opens up for a lot of discussion. It's a lot of fun - a lot of Scripture done in a very interesting way."

Are you planning to do some more?

"Yes, we do a brand new one every month. What we're doing is bringing some like the first 12 shows that we did for video and then as time goes on we'll be adding to that."

There are many people who are looking forward to you coming back to Europe. Have you got any ideas when your busy schedule's going to allow you to do that?

"We're planning on doing an extensive tour with 'R.I.O.T.' so we'll be coming over there. First we have to do the video, then the tour. The 'R.I.O.T.' tour will begin in February of next year. Whenever we get done with our initial tour in the US we'll head overseas. I think we're going to come to Wembley Arena."