Ceili Rain: Our Best Gig... So Far, described by the Celtic rockers' frontman

In our series we ask well known artists to pinpoint their most memorable live performance. This issue Bob Halligan, Jr, frontman of the Celtic rock group CEILI RAIN, reveals the deep and dark secrets of their best gig. 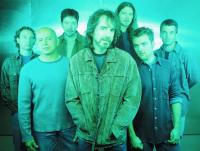 There was this gig we did in Saskatchewan, Canada at the Frenchman River Valley Gospel Music Jamboree, eh, they always say 'eh' after everything over there! To get there we had to take three planes and travel four hours in this van. Being such a large group, most of our fun is on the road! We all get on very well, while travelling, which is incredible considering that there are seven of us. Sure, everyone has their negative moments, but I think we rate better than other groups who are coped up in a tour bus for hours! The owners of the van had a cat, which, until Ceili Rain turned up, had never looked cross-eyed at anyone. But as soon as it saw our substitute accordion player, it went for her - twice! It practically jumped from four feet away. That cat was attached to her; it was just horrible. They had to put her down, the cat, not our accordion player! She's a cat-lover, so we don't know why that happened; she wasn't abusing it or anything. I guess it was a very angry moment for the cat. But, the actual gig was fabulous! However, the audience was basically a bunch of farmers from that area. Because the land is so vast there, most of them had travelled quite far as well. And, being farmers, most were in their 60s or 70s! There were a lot of families though! When we realised that this was the case we did have to cater for them a bit! Essentially, we did the same sort of thing we would do at any gig, which is to just have fun and have a good time with the music and the crowd. I think we just turned the volume down and played a bit smoother! It's fantastic to be able to front a group that can cater to so many different types of people, hopefully giving them an exciting and thought-provoking experience.