Chaos Curb Collaboration: A song-by-song run through of 'Everywhere' 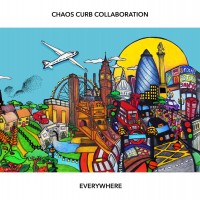 Bournemouth's Chaos Curb Collaboration have just completed a eleven date tour of the UK with Martin Smith where they played many songs from their newly released 'Everywhere' album. Frontman and composer with the band Dave Griffiths talks us through an adventurously progressive worship album which was "sculpted from two years of almost continuous recording and writing."

"Immersion"
This track is the opener because I wanted to state our intent right at the top of the album. It's literally an immersive, electro instrumental that is built around an arpergiator I programmed on an ipad app. I played it to Ben 'Galactus' Jack who was over for tea one night and he loved it and put some more elements on it. I realise some people won't like it, as it's very electro and an obvious step further left-field from our first album. I think it's good to be honest about what you want to do musically.

"Maranatha"
This song was left over from the first album's writing sessions. It had all sorts of arrangements until we came across this groove. It's a very optimistic song about the return of Christ based on some of the final verses of the Bible. I'm so pleased with the sound on this song. It's got a lot of live instruments, and a lot electro elements too, which is sort of our sound I guess. Rich Gawler's guitar part really completes the recording for me.

"Everywhere"
This album started with a recording session in my dining room with our piano. This song was born in the Lake District with the first half coming quickly, it's a very simple lyric. The second half came as an improvisation in my dining room. The theme, as with a lot of our lyrics, is about seeing all of life as living in connection with God, looking and listening for him everywhere. I'm really proud of the sound of this song - very sparse electro and yet using real piano, then evolving into a more dance-orientated groove. 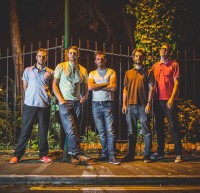 "Atmosphere"
Another piano-based chord progression and another outward looking lyric. This song evolves into an all out techno jam, from quite an '80s ballad sounding start. We tried to make it sound as huge as we could. Somewhere between Bruce Hornsby and the Chemical Brothers.

"Deep"
This could be the most "different" track on the album because it's so progressive. It has a lot of real piano which we glitched up and worked hard to create a sense of big space. I listen to artists like James Blake and DEMS who use quite minimal arrangements. The whole of the album has been a two-year sculpting session and this song evolves into three distinct parts. I hope it moves people along with it into a place of contemplation and peace.

"Connection"
This is the most personal song on 'Everywhere'. It holds a special place for me in that it's the first thing I wrote after my old band, BOSH. ended in 2011. It was born out of a place of brokenness and longing. You know that feeling of longing for the tangible presence of God? It's about that. Jesus is the joy of my desire - the one I want most, and this song is a love song to him.

"Watch Me Burn"
A John Wesley quote says, "Set yourself on fire, and the world will watch you burn." This is a song about how we go from being far off in our minds from God, to being "on fire" in who he is. We are united with the divine in such a way that the world is watching us. We are walking testimonies to who he is. I love the arrangement of this song - and the production is all-out bigness!

"Represent"
Staying on that theme, "Represent" is built around a Todd White saying; "'Mercy woke me up today to give me another day to represent God's love and bring Heaven to earth." This song came out of a moment of spontaneous worship, just me and my guitar. I want to walk in closeness and depth with Holy Spirit, because that will be how Heaven and earth get connected each day. Amazing! I love the drumming by my brother, Mike, on this song. It's also got Marc James on slide guitar, who is one of my best friends. It's all about the '70s heavy-rock rhythm with huge doses of modern electronics. Fun! The album only has eight tracks, but that's because some of them are long form and progressive. It's definitely following the electro/rock path we were forging on the first album. It's great fun to play live, and I write this on the road touring with Martin Smith as support band. I genuinely believe music that worships belongs not just in church meetings, but in pubs and bars and everywhere music is played.

Good song by song of everywhere Dave.
Really enjoyed this album and my favourite tracks are atmosphere,
Represent and maranatha.
Saw you guys at the fleece hotel and was lush.
As a born again christian can really feel God in your music and your all truly blessed with this talent.
I orginally saw Bosh in 2009.
God bless And merry Christmas.
Chrris