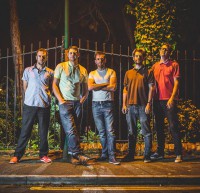 BOURNEMOUTH-based Chaos Curb Collaboration have returned with the single "You Are. . .". Read a press release, "After nearly four and half years since our well-received second album, 'Everywhere', and club tour with Martin Smith, we are pleased to say Chaos Curb Collaboration are back with a new single, 'You Are. . .'. In the last four years, as a band, we have been through all sorts of trials. Each one of us have had mental health struggles, including breakdowns, depression and bi-polar. We've suffered divorce and grief. Some of us have lost our faith, and others have had it drastically change shape. The result is a new season for us as a band. We are in the process of writing and recording a new album, titled 'Life, Death and Resurrection'. The songs are a mixture of long-form ambient instrumental pieces, guitar-based rock, and big warm synth pop like 'You Are.'. We are tackling difficult themes of faith and loss of faith, doubt, anger, grief, joy and beauty. 'You Are. . .' was co-produced and mixed by Patrick Mayberry, worship director of Soul City Church, Chicago, and the genius behind 'The Wild Wind'."