Charmain: Once a singer with The Pod, now solo 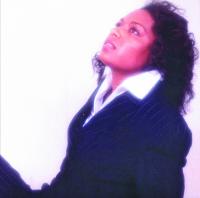 A couple of years ago Cross Rhythms was playing a couple of tracks from a London collective called The Pod. Fusing jazz and gospel together, the group featured Charmain as one of its vocalists. It's ironic that at the time The Pod were sometimes confused with P.O.D. and now that Charmain has come to release a solo album, there's an Australian singer called Charmaine on the scene. Charmain says, "Don't you think we both share a really cool name? I won't be changing mine, I am Charmain from the UK spelt without an 'E'. I hope that I have the chance to meet her one day. Maybe we could do something together. Just think, the two Charmains from opposite corners of the world coming together in one voice."

Her debut album is called 'Don't Blame It On The Past' because, she says, "Sometimes when we hold onto negative things, it can cause us to decay on the inside and God cannot use us. It is time to move on now and step out in faith."

These are not idle words because Charmain is simply walking the talk. There have been enough mistakes and hurts in her own past that could easily have stopped her from serving God and yet she has pushed through and experienced the grace of God. "I have had so many ups and downs in my life. I have put myself in situations that I am ashamed to admit and also been the subject of ridicule and the victim of abuse in different forms. But God is able through it all. We are only human and situations can come upon any one of us at any time. Some we deal with successfully and some not so successfully. But through it all, God has blessed me with the ability to put pen to paper to let the world know that God never fails us even though we fail him. A saint is only a sinner who falls down but gets back up again because they have God to pull them through. I want the world to know there's hope for the sin-sick soul. For us sometimes life may seem hard to bear but if we just focus on God we will be okay."

Like her sister-in-law Donna Gardier, Charmain has signed to a mainstream label, this time it's Jetstar, so once more a gospel album goes mainstream! So how does she feel about the British gospel scene? She responds, "The UK needs its own identity where gospel music is concerned and the word needs to get out there to the world. We can do it just as the USA can do it. They are doing their job and celebrating their artists. The UK needs to do that and stop looking beyond these shores when there is so much talent here."

I have known Charmain since she was a hugely talented teenager, and to see her grow into beautiful and multi-talented musician is a joy to behold. Charmain has been blessed by God to bring joy to people who listen her sing. Her life is an inspiration to those who have suffered and survived. Continue glorifing God and blessing people with your voice Charmain

Just a clarification point... Charmaine didn't just come on the scene: her new record Love Reality is getting the press it deserves... but that girl put her first record out in 1995... then releases Nationally in 2002... has toured worldwide since 2002 with Rebecca St. James.... And she's toured the UK several times... Plus she's Australian: doesn't that sort of make her vicariously connected to the UK? I think you guys should adopt her too as one of your own. *smile

Just a clarification point... Charmaine didn't just come on the scene: her new record Love Reality is getting the press it deserves... but that girl put her first record out in 1995... then releases Nationally in 2002... has toured worldwide since 2002 with Rebecca St. James.... And she's toured the UK several times... Plus she's Australian: doesn't that sort of make her vicariously connected to the UK? I think you guys should adopt her too as one of your own. *smile

For more on Charmain visit the Charmain artist profile