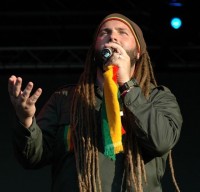 Mike: Why do you keep making albums?

Mark: I don't want to do anything else. Because I don't want to work a nine to five, I end up working a nine to nine. I love it, I'm wired this way, this is just how God made me. He just keeps giving me those songs. This one is going back to the themes that have been peppered all throughout. At one of the last concerts we did I announced from the stage, "Our next album: we're in the studio right now recording 'No Compromise'." And then the next four songs, I realised that each one of them had the phrase 'no compromise', and I'm like, "My gosh, this is a theme." Ever since I first heard Keith Green, back in the day, with his album 'No Compromise', it's been a motto for me.

Mike: What are the themes that come out in this album?

Mark: "We have everything from marijuana use, to slipping into erosion of faith - apostasy - to abortion, to worship. There's everything. A lot of salvation, a lot of the message of the good news of Jesus Christ also.

Mike: Where would the song "Most High" fit into all that?

Mark: I was raised in a Christian family - straight away went into drugs and did almost everything but shooting-up. One of my favourite drugs was cocaine. I grew marijuana, I dealt it, I used it significantly. Every time I tried to get high, I just found myself getting lower and lower. Every time I tried to fill myself up with alcohol, I found myself getting emptier and emptier. It wasn't until I came to Christ that I felt a satisfaction in my soul and a fullness of being. Ever since I came to Christ I tried to write songs about marijuana, about drugs, about this about that: "I do not smoke the herb, I only read the word", or just cheesy things where I'm like, "I can't do it!" So for years we didn't even talk about it, because I couldn't find a creative way to do it, until finally, with this song, we get high on the Most High. And we have t-shirts, "I get high on the Most High". It's kind of like, "I get high with a little help from my friends," it's a play off that, but it's ultimately a play of the true Most High, Jesus Christ. This is my testimony, check it out.

Mike: Have you always been loud, even before you were a Christian?

Mark: Yeah, I was always a class clown; I was always the one kicked out of school, or grounded. I was the one messing around, and, ultimately, that's all I do on stage. It's just improv.

Mike: So all the people you upset at school, all the teachers, they were wrong?

Mark: No, they were right. They were all right, especially my chorus teacher, who saw something in me, always made me the lead in the play, tried to harness my creativity. That really gave me the bug for acting and doing music.

Mike: Do you ever reflect on how your life might've been if you hadn't gone to a Christian camp and met a guy there playing the reggae music and you taking your first step towards God?

Mark: No. Thanks for reminding me. I don't wonder. I see all my friends that were in the same spot as me, that came from the same background, and are now plumbers - most of them are plumbers. Some of them are in prison, some of them are dead. I'd be sucking junk out of loos. I'd be doing something I wasn't called to do, that I wasn't born for.

Mike: Tell me about "Protestors" on your new album.

Mark: On this album we deal with a lot of taboos, a lot of things that Christian artists don't want to deal with, and probably the biggest issue is abortion. The simple fact is that we cry over a few thousand that are lost in the war in Iraq, or the few thousand that are lost in the World Trade Center, yet there's a few thousand lost every day in what I call a silent holocaust, abortion. Sure, it's done behind closed doors, but it doesn't change the fact that it's done. Innocent lives are being killed, lives that can't fend for themselves. So I set out to become a voice for the voiceless. Again, for years I've been trying to write a song about this, and I wrote this song about four or five times. Finally I said, "I'm not going to sing this song, I'm going to have gospel reggae artists worldwide sing this song." We've got as many artists as we could pack onto this album - top artists, and the young up-and-comers. Some of the best voices on it are the artists that you still don't know, until you hear this song. Each one of them, we crafted their lines together. So it wasn't just my story, it's their story. I was talking to people who their mom just about had an abortion, on their way to the clinic, then she was deterred, and now they're alive. There's so many powerful stories; this song is really just about that.

Love, love Christafari. Just introduced to them this Labor Day weekend my older sister.
Beautifully done. Keep walking with God on the straight and narrow and keep winning souls for His Kingdom.

Nuff respect to you Mark.The interview is an eye opener into your personality. Why you do what you are good at. One Love Idren.