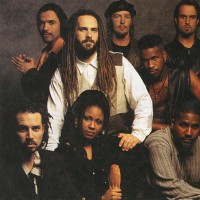 Back in Cross Rhythms 20 we celebrated the existence of Britain's reggae gospel underground talking to artists like Ben Okafor, Rupie Edwards, Liquid Light and Ann Swinton. But even there, our feature acknowledged the US Christian chart success of 'Reggae Worship', the debut album for Christafari. So much has happened since 1992 when Christafari's album made an unexpected CCM hit for Frontline. They've released further highly successful albums, 'Soulfire' and 'Valley Of Decision', for DC Talk's Gotee label. They've toured America with such reggae luminaries as Big Mountain, Wailing Souls, Aswad and Buju Banton on 1995's Reggae Sunsplash Tour. And they've seen 'Valley Of Decision' go bursting into America's national reggae chart.

It was in Los Angeles in 1991 that Christafari, the trio, began. Signed to Frontline Records they recorded an album, 'Reggae Praise', featuring a mixture of reggafied praise choruses and some Christafari originals. Compared with pop gospel's anaemic attempts to reproduce the sinuous rhythms of reggae, Christafari's album bristled with authenticity and, catching the ear of the CCM audience, it became Frontline Records biggest hit since they lost Jon Gibson.

In 1993 the band were signed to Gotee Records, the fledgling company pacted to Word Inc, set up by CCM luminaries DC Talk and with the release of 'Soulfire' gained the support of Reggae Ambassadors Worldwide, a network of journalists, radio staffers and other who help spread reggae. That was followed by the band being asked to join the prestigious Reggae Sunsplash Tour, one of the largest tours in the world in any genre of music, taking in 46 cities across the US and Canada.

"It was a serious honour to even be considered for Reggae Sunsplash," Mark Mohr told The CCM Update. "We were the first band on the show so the very first thing the people would hear was the gospel of Jesus Christ. The response was phenomenal."

"They were a great bunch of guys to have on the road," said Wayne Sinclair, tour manager for Reggae Sunsplash, Inc. "They were very professional, very cooperative and very appreciative of the fact that we had them on the road. I've nothing but praises for Christafari in terms of their professionalism and the kind of people they are. In terms of having a Christian band on the road reggae music has always been a very spiritual kind of music. So Christafari and their message really played right into the whole theme. They were a natural mix into our overall package."

There were, however, obstacles to overcome on a tour of this size. Midway through the tour, a member of the Sunsplash production crew found a copy of a book Mohr had written, entitled Rastafari And The Bible. The book makes comparisons between the Rastafarian religion (which most reggae music is based upon) and the Bible. Mohr says the book was passed around to nearly everyone on the tour within days.

"We went from being everybody's best friend," Mohr stated, "to being excommunicated and called a 'tool of Satan'. People I'd revered and honoured, and who had been some of the biggest musical influences on me, now hated me. It was really tough."

On one occasion, one of the most popular reggae artists in Jamaica and one of the tour headliners, Buju Banton, confronted Mohr with a knife in the lobby of Cleveland's Omni Hotel. Cleveland police were called in after Banton punched Mohr in the neck and then swung the knife at him. Mohr declined to press charges against Banton when the police explained that Banton would be deported and would not be allowed to work in America again. "That was a real tough thing for me," Mohr said. "However, I really felt the Lord leaning on my heart that I could not expect him to understand the God of forgiveness and grace if I did not first demonstrate that myself."

Sinclair said he doesn't believe that Mohr was in any real physical danger. "Believe me, if anything more was going to come out of that, it would have been something that would have kept happening as the tour went on. After that morning, there weren't any further incidents. I think emotions and passions were just running a little bit high and things just kind of got carried away."

With the 1996 release of 'Valley Of Decision' (Cross Rhythms Pick Of The Pile for August/September '96), their spectacular blend of ragamuffin, dance hall, lovers and even jungle took gospel reggae to a whole new level of creative excellence. A tour with Geoff Moore And The Distance solidified the album's popularity with the CCM crowd while high profile gigs like the Olympics bash with Hootie & The Blowfish and gigs alongside Ziggy Marley helped break the band in the reggae mainstream. For more conservative evangelicals however, the idea of dreadlocked gospel musicians using a music form normally left to Jamaica's ganja prophets was an abomination.

"Years ago, they said the exact same thing (about) Larry Norman, Stryper and all the pioneers of Christian rock," vocalist Erik Sundin told Billboard magazine. "We are a reggae band. We do what we do for Jesus. We believe that music is a very creative thing and we believe we get our creativity from God. Our love for the music, the culture is also based on our love and God's grace and for God's people."

Band member Mark Mohr agrees. "Many people consider reggae as being 100 per cent Rastafarian," he said. "They forget the roots, the foundation of reggae music came out of the Church - Peter Tosh, Bunny Wailer, Bob Marley, singing church hymns. Rita Marley came out of the Church...All of the strong lead singers of today were birthed first through singing Christian hymns from the Church. So what we basically decided to do is take it back to the foundation."

'Valley Of Decision' was produced by Mohr, Sundin and Guerrero. Erik Sundin says that the album is representative of the band's artistic direction. "This album has songs that Mark and I wrote as more mature writers...We also have a new writer on our team." Sundin speaks of Johnny Guerrero, who joined the band three years ago.
"His writing is phenomenal. We each brought a bunch of songs to the table. Johnny's songs were so good that every one that he brought was chosen. They're just strong, powerful songs and that alone is making the album totally different. His horn arrangements and chord structures bring a whole new dimension of Christafari that's really cool."

Mohr says that 'Valley' deals with the daily realities of being a Christian. Guerrero concurs. "I've approached all my songs from a personal point of view," he said. "And now that I've written these tunes, they are constant reminders to me of my struggles and how I need to walk as a Christian."

Mark Mohr was in October 1996 ordained by Bob Beeman of California's Sanctuary Church into the ministry. Mark will now focus on ministry work and church planting in Jamaica, though his passion for Christafari and reggae music remains undiminished. As he told Premier magazine, "As with any missionary - the great Hudson Taylor when he was a missionary in China, went and changed the way he looked so that he would adapt so the people would accept him. Paul in 1 Corinthians 9 said, 'I have become all things to all men for the sake of the gospel so I may win some, to the Jews I become like a Jew...,' to the Rastafarians we become like Rastafarians, we adapt to the parts of their culture that are biblically right - dreadlocks, they take from John the baptist who was a Nazarene, from Samson, from Samuel, from other people like that who were Nazarenes, who never cut or combed their hair.

"They are part of a lifestyle, not a religious thing, we do not have dreadlocks because we feel that God is telling us we have to, we do it so that we can be accepted in places - on stage, backstage, to hand out Bibles to other reggae artists. We believe in Christ as the transformer of culture. We don't believe that everything within a certain culture is bad, but we take Christ and minister through the culture and the tings that are bad within it get changed through Christ. So obviously we do not adopt the worship of Rastafari, we do not adopt the smoking of marijuana, but we do adopt the reggae music, the hair, the dance..."

Ultimately, Christafari hope to lead the way for any Christian reggae band to follow. "Our ministry has always been two-fold," Mohr says. "Our purpose is to evangelise the world and edify the Church. We want to break both the Christian and secular genres and be 100 per cent in both and not compromise or change the message for either."