With the CompassionArt book and album due for release, Clem Jackson spoke to Martin Smith 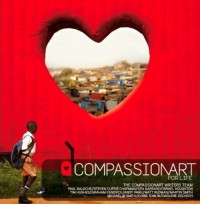 The book The Art Of Compassion edited by Craig Borlase (Hodder & Stoughton) is the companion to the 'CompassionArt' album, featuring the work of such composers as Paul Baloche, Steven Curtis Chapman, Israel Houghton, Tim Hughes, Graham Kendrick, Michael W Smith, Matt Redman, Chris Tomlin, Darlene Zschech, Stu Garrard, Andy Park and Martin Smith himself. Both are released on 24th November. All profits from the album, and the lifetime royalties of the specially written songs, will go to the charities which the artists support.

Craig Borlase has pulled off an amazing feat in bringing all the contributions together in less than four months to create a fascinating insight into the hearts and thinking of 12 very well known individuals. And to do it in such a short space of time is very impressive. The resulting book, although written by a number of people, does have a cohesion because it tells the individual stories as to why these highly talented and very busy people gave up their time to do this and get behind the vision for this project.

Martin and Anna Smith, whose vision CompassionArt is, wrote their section as a diary of their journey through the 18 month period from conception to fruition and I met with Martin to talk about the book, the vision and his experiences throughout.

Clem: Martin, you've dedicated the book to a little girl called Farin. Who is she and why the dedication?

Martin: Farin was the beginning of our whole process for this whole thing. Farin is a little girl in India who I met when we were taken out to this project in the red-light district of Mumbai. As a band we've visited loads of projects over the years. You turn up, get impacted, go and play the concert; then you get on the plane home and you forget about it. But this time was very different.

We went into this small place, the size of a garage, and there were 70 children there, all being looked after by an amazing little team, giving them education, food, a bit of church and primary health care. Most of their mothers are commercial sex workers, quite a sad environment. The future for these children wasn't that great either because, unless you take them out of that environment, a lot of the girls will just naturally fall into that trade. There was this one little girl who kept on staring at me, she was absolutely beautiful and I really connected with her. I came home and could not get her out of my mind; I was sitting around the dinner table with the family and it was like one of my kids was not there.

It was a very, very powerful emotion; I've never felt that before, it was like the spirit of adoption. Anna, bless her, was pulling her hair out saying "You're a nutter," but actually she is really open if she feels it is the right thing. We went down that road a little bit; we got some papers from the UK agency and we were really seriously looking into adopting Farin. But half way through the process her mother came out of that trade. I think the big trigger was that we were going to take the child away from the mother; I think it must have made her really think. Now she and her three children are being rehabilitated three hours drive away in brand new life centre which I am going to go and visit soon. So Farin is the little girl who turned our world upside down.

Clem: So that is the sort of project that CompassionArt is seeking to support?

Martin: Yes. We couldn't physically adopt Farin, and I think that is probably the right thing in the end, so we've just adopted all seventy of them and we're involved in that whole project. Our kids have been there and it's powerful when your children start engaging in situations like that, of extreme poverty and oppression. It definitely has changed their conversations at home.

Clem: You and Anna started the charity - what led you to do so and what are the aims of CompassionArt?

Martin: Well the aim was never to start a charity actually, that came as a by-product of the idea to gather together some people that we have met and worked with over the last 10 years, influential songwriters in the Christian scene, and see what we can do together; to see what songs we can come up with. Then the next thought was, well this could be amazing, this could raise a lot of money so let's just give the copyright away now into a trust, and that's when we realised needed to have a framework. That's how CompassionArt came about.

Clem: When we last met you were preparing for the Songwriters' Retreat in Scotland. 12 songwriters, 42 million albums sold; how did it go?

Martin: It was one of the most extraordinary weeks of our lives, and that's not just me saying that - I know the other guys feel the same. It was just a very, very significant time for us all, not just musically but spiritually, personally; the sense of coming together as a team was a new experience for a lot of people. That sense of being in a team and community was just extraordinary you know.

Clem: 22 songs were written so how did that happen? Did you all sit around together or what?

Please advise if there is an available Accompaniment only for all the songs of Compassionart and how to purchase it.