Crucial: The rapper and producer from North Carolina denouncing the "Star Fantasy" 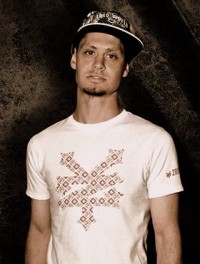 Despite the continuing decline in CD and download sales throughout the music industry, one particular bright spot is gospel hip-hop. What was once an obscure offshoot of the Christian music scene has today grown to a vibrant music genre which from its premier rappers like Lecrae and Andy Mineo to the countless hundreds of emcees who constitute the holy hip-hop underground, it is clear the scene is flourishing. With such a tidal wave of releases, it takes a truly special track to make the Cross Rhythms playlist but that's what happened recently to the Charlotte, North Carolina-based rapper and producer Crucial. His CR turntable hit "Star Fantasy" actually comes from a seven-track free mixtape 'The End Of The World'. Alongside his rapping skills Crucial is a well respected producer and recording engineer who has produced tracks for numerous artists through his Beat Lab 7 Productionz company. One of his latest productions is with Britain's Picasso.

Cross Rhythms began its interview by asking Crucial, real name Matthew James Slyman, to fill in some biographic detail. "I was actually born in Birmingham, Alabama while my father was in medical school. But at the age of two we moved up to Lexington, North Carolina where I was raised. Though my father grew up poor, he worked very hard to provide his family with a better life. And though I was born into a better life than he, we (my siblings and I) were taught at a very young age the value of working hard and earning our way in life. I grew up in a white suburban neighbourhood but went to a very culturally diverse city school. Many of my friends were either African-American, Hispanic or Asian. My parents divorced when I was 15 years old but both are now much stronger in their faith walk than they were back then. They have been very supportive of the calling on my life and have offered more prayers and encouragement than one could ever ask or expect."

Even as a child Matthew was fascinated by music. He began taking piano lessons at the age of nine and by 11 was composing his own songs. A year later he was writing his first rhymes and creating his first beats on a little keyboard. He remembered, "I also learned to play other instruments such as clarinet, saxophone, bass guitar and electric guitar. I joined a rock group when I was 17 years old and wrote half the music for the band. All through my life I have been turned on to many different styles and genres of music from rock to reggae, jazz, blues, hip-hop, dance, pop, classical, country, folk, the list goes on. . . I even love Broadway musicals from the '40s, '50s and '60s."

Spiritually, things were not working out too well for the talented teen. Said Matthew candidly, "Around the age of 16 I began to rebel (like many kids I suppose). I began smoking and drinking. Then I got involved with some bad influences and began doing drugs and partying all the time. At the age of 19 I was pretty much living with my girlfriend (sometimes sleeping out in my car on the street somewhere) and began breaking into places, stealing stuff to pawn off the streets to support my drug habit. I was in a bad place for a long time. That's the 'long-in-short' of it. Around the age of 21, the Lord got a hold of me and began changing my life. There wasn't any single defining 'magical' moment, but it was more of a process. I began putting my trust in him. I began seeking after him. I became more and more interested in his Word. And through a long series of events, I became very passionate about him and the life that he would have for me. Everything about me started changing. . . from the way I saw or viewed things to the way I treated others and the way I dealt with certain things. Jesus Christ has truly revealed himself to the lowest of the low."

Around 2003 Matthew had acquired enough recording equipment to begin putting together beats over which he could rap. He remembered, "I began doing this when I was 25 years of age. My first concert was at a huge youth outreach centre in Rock Hill, South Carolina. It was called The Pointe. I rapped before an audience of over 300 or 400 youth and adults. It was an unforgettable moment."

In the spring of 2005 the fledgling rapper, now known as Crucial, released his first album, 'Not Of This World' and later that year an EP, 'Without Compromise'. His Beat Lab 7 set up was attracting more and more local rappers looking for beats over which to demonstrate their flows. In 2007 a free download various artists project 'Beat Lab 7 Presents Music Meets The Truth 2007' featuring such emcees as Omega Spark, Dae Lee, Tawana and God'z-illa was released. A 2008 version (featuring Urban D, The Breax, Minister RMB and Street Pastor) and a 2009 download set (featuring Braille, K-Drama, D-Maub and Tre 9) drew in many admirers both rappers and fans. 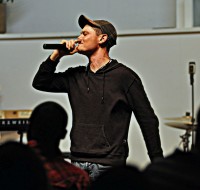 In 2011 Crucial released his own album 'The Hard Truth' from which sprang the singles "Property Of Jesus" featuring D-Maub and "Hit A Woman" featuring K-Drama while it was to be the winter of 2012 that Crucial's 'The End Of The World' mixtape EP was released. The project deals with important themes like the wind up of the age and dealing with the love of the world which besets all of us. With superlative production and fine flows from Crucial it would no doubt have sold well if released through iTunes. We asked the rapper/producer why he had decided to make it available for free. "I just wanted everyone to have a chance to hear this message. The message in its entirety is so important. . .and it's something I strongly believe in. Of course, I feel strongly about everything I write about but this album was just different and I just couldn't put a price tag on it. It is a great encouragement to know that so many people have been blessed by its content. To God be the glory."

Crucial spoke about the "Star Fantasy" track. "It was my own insecurities, as well as the insecurities I see in others, which inspired the song. I believe the media feeds those insecurities. I believe this world has placed such an importance on fame and 'the spotlight' and it can make us 'little guys' feel unimportant if we can't seem to achieve that stardom. But God does not place our value on what we DO, but rather, who we ARE. Every one of us is a star in his eyes, and we mean so much to him. We are already worth so much. . .and sadly, many people trade everything they are already worth for something that can never truly satisfy."

We finished the interview by asking Crucial what spiritual lesson he has learned over the last couple of years. He responded, "I have learned that the more I draw near to God, the more He draws near to me. The more I seek Him, the more I find Him. And it is not necessarily by my own good will, but rather His perfect will and the patient, gentle, loving and graceful leading of His Holy Spirit."

I am a fan of Crucial's. I have had the benefit of meeting and getting to know Matthew reasonably well, as he is my son's dear friend and my son is also a DJ & Rapper - the one named Godz'-illa and mentioned in this very informative interview. I have known Matthew for about 10 years and have heard him many times. I am in my late 50's and Hip Hop is not typically the music I would listen to. However, the words that Crucial raps so fast & clearly will always draw you in. They are always full of wisdom and such catchy beats that you do not want to miss a single one of his very speedy words. He is Awesome. I must say...so is my son. They and all of their friends are truly the most devout & genuine Christians that I know. I love being around their energy...it is infectious!

Matt is one awesome hip-hop rapper and beat maker...my brother is a die-hard rap lover, preferring the explicit stuff, but Crucial's beats gave him something new to listen to, that he really enjoys and has a positive message that is influencing his life. thanks Matt!!

For more on Crucial visit the Crucial artist profile