Tamsin Jones spoke to legendary record producer, singer and songwriter DAN PENN who spoke about his love of soul music and his Christian faith. 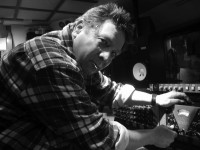 Dan Penn is the kind of music figure for whom the word "legendary" often comes up. To those who know their music history, and particularly fans with a liking for '60s southern soul music, Dan Penn is indeed a legend. By 1965 Dan had written his first American top 20 hit "Let's Do It Over" for Joe Simon and in the following years there was a string of classic songs including "I'm Your Puppet" (1966, James and Bobby Purify), "Sweet Inspiration" (1968, Sweet Inspirations), "Cry Like A Baby" (1968, The Box Tops), "Do Right Woman, Do Right Man" (1967, Aretha Franklin and later Linda Ronstadt) and the simmering soul classic "Dark End Of The Street" (a hit for James Carr in 1967). With the passing of mass popularity for the Southern states deep soul music Dan Penn ceased to be a top 20 hitmaker but still remained a respected figure in the music scene. He flirted with a singing career with several one off releases including the critically acclaimed solo album 'Nobody's Fool'. He also maintained his long time friendship with songwriting partner Spooner Oldham, even appearing in concert with his friend.

Proper Records have just released the album 'Better To Have It' by Bobby Purify with Dan Penn co-writing (with Carson Whitsett and Hoy Lindsey ) all but one of the songs as well as engineering and producing the project. I spoke to Dan at his Nashville recording studio and began by asking him how he felt to be working again, after 20 years, with one half of the duo who recorded one of Penn's biggest hits "I'm Your Puppet". "He has a fantastic voice," said Penn. "It was fun to record a black voice because I hadn't done that in a long time and that was always one of my favourite things to do in the studio. So Bobby gave me the opportunity to do that again, he's really nice to work with. He's a very nice person."

Born Wallace Daniel Pennington in 1941 in Vernon, Alabama, his professional singing began in the late '50s with his first band Dan Penn and The Pallbearers. It wasn't until the early '60s when he hooked up with various co-writers that he had his first taste of real success. I asked Dan how he's coped with the changing face of today's music scene. He replied, "These days the music is so diverse it's hard to know what people like. But I still do basically what I did in the '60s. I have hardly swerved one way or the other really. Maybe the songs aren't as good - I don't know - but I still feel the same about music."

I asked the soul music legend about his Christian faith. "I was raised in church, I'm an old Methodist. My parents took me to church when I was a child and when I got into trouble, I knew where to turn. I was pretty well drugged out back in the '70s - and round about '81 I got 'changed' to say the least. I was having a hard time; I felt like I was about to leave the world. But praise to the good Lord, he said 'Okay, we'll fix you,' and he did. I just came to the end of the trail. I prayed, and God told me what to do. He said, 'Come on back to church, I'll fix you right up,' and he did exactly what he said he was gonna do. When I first got saved I was like every baby Christian. I was praying every moment and always trying to 'stay in touch' and as you know, later on your feet finally do touch the ground and you have to grow up. I'm not an avid church goer right now but I do watch a lot of preachers on TV. I still need and want to go back to church but it's hard finding the right one."

Even after all these years Dan retains his passion for music. "Writing is my life, it's what I do. I do produce records and I sing a little, but if I don't write I don't breathe right." Penn has written a few gospel numbers, and subsequently led worship in one of the first churches he attended when he first became serious about his faith. He talked about his struggle when he first became a Christian as to whether or not he should continue to write and produce the same kind of songs.

"There was a period in my life when I first got saved I thought, 'I ain't gonna write any more of that nasty R&B and pop music like a lot of people!' But I was beginning to have a hard time about that and I was trying to get an answer about it all. But then one day in the garden God told me it wasn't the kind of music I wrote that was the problem, it was the way I was living my life. So I thought maybe it's alright to write about what I want to, as long as I keep walking. It doesn't necessarily matter about the subject, as long as it means something to me. I write for myself and I try to please myself. When I'm writing, I'm just absorbed by trying to have a good time. And a good time, to me is when a song comes together. I sometimes pray for a song, and I say, 'Lord, if you can't give it to me, give it to my co-writer!' I love gospel music. Southern gospel quartets which I used to not care for are now my favourites."

Finally, I asked him how his life has changed since he became a Christian. "Well, I'm sober! And fairly clean. I am clean of all drugs and alcohol. I no longer do any of that. And all that was a problem. I had other problems but I don't not drink, because I'm strong. But at the same time I don't get drunk because if God rescued me from all that, the least I can do is not pick the bottle back up. So I try to do my part, but something very strong was hitting me back in '81 and I haven't forgotten that. I haven't forgotten how lost I was. I came to the end of my rope and I knew that was it. I had one foot over the grave, or I felt like it. I felt really bad and had some bad experiences, but one prayer and he was there - shall I write a song?!"