Darlene Zschech: The "Shout To The Lord" story

Tony Cummings recounts the story of "Shout To The Lord", the worship classic written by DARLENE ZSCHECH 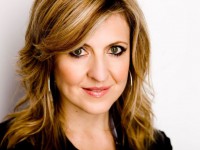 The news that Australia's worship leader, pastor and author, Darlene Zschech will be releasing a new live album in March has been greeted with considerable expectation by the worshipping Church. As most churchgoers will know, Darlene is responsible for possibly the most popular song since the emergence of the modern worship movement in the early '70s. The stats are staggering. Every week Darlene's "Shout To The Lord" is sung by an estimated 30 million worshippers.

Darlene was immersed in music even as a child. By age 10 she was performing on a weekly children's show on Australian TV, Happy Go Round. But she had to endure her parents' shattering divorce and subsequent custody battle and at the age of 13 she was already struggling with the first signs of bulimia. Her father rededicated his life to Christ and began attending church and he took his hurting daughter with him. Darlene began her own relationship with the Lord and was still in her teens when she met a man who was to become her husband. Darlene and Mark married one week after her 19th birthday and the newlyweds moved to Sydney. Eventually they found their way to Hills Christian Life Centre and Darlene's singing experience - she had done some session work and jingles for companies including McDonald's, KFC and Diet Coke - meant that she was soon a member of Hills' worship team. The church was growing fast and by the early '80s had started a record label Hillsong to market the music which was beginning to flow from the team.

Things were very difficult for Darlene and Mark. Mark was struggling with a failing motorcycle parts business and it was becoming all but impossible to support Darlene and their two young children. Recounted Darlene, "We had probably come to the end of ourselves, and we were losing our way. Therefore all these dreams, all these things we wanted to do, but nothing was happening. All I wanted to do was serve God but it was like 'how are we ever going to get there; how are we ever going to serve you in a greater capacity?' It felt like he kept hitting our heads against a brick wall and I was just sort of overwrought."

One particularly trying day, Darlene wandered into her daughters' toy room and sat at the old piano they had acquired. Darlene laughed, "That poor thing was already ancient when I got it five years previously. It was out of tune and louse-infested - you know, really glam! But I had some words I'd been thinking about and I just started singing them. I've always been a worshipper, that's where I naturally go, so I sat there and sang and that song simply flowed out of me."

Initially Darlene was too shy to even sing it for her worship pastor. Finally she gathered courage and told him that she had written a song. When he asked to hear it she insisted that the music director stand with his back to her while she sang. Said Darlene, "I was so embarrassed, I just fumbled my way through it." A few weeks later Darlene sang "Shout To The Lord" for the first time at Hills. As she sang, hesitantly first and then with growing confidence, the words echoed around the auditorium: "My Jesus, my Saviour/Lord there is none like you/All of my days, I want to praise/The wonders of your mighty love/My comfort, my shelter/Tower of refuge and strength/Let every breath, all that I am/Never cease to worship you." By the end of the first chorus people were standing to their feet as it soared into the chorus "Shout to the Lord all the earth let us sing/Power and majesty, praise to the King/Mountains bow down and the seas will roar/At the sound of your name." Admitted Darlene, "I started looking around because I thought maybe something else was going on. Then I realised that it was the song and I thought, 'what is happening here? It has taken on a life of its own, as if the breath of God had just jumped into it.'" In February 1994 Hills Christian Life Centre recorded their album 'People Just Like Us' and "Shout To The Lord" was recorded for the first time.

In 1996 the song came to the American church's attention when Hosanna! Music released their 'Shout To The Lord' album and Darlene's stirring vocal on her song ensured the album stayed at number one in the US praise and worship charts, selling one million in the process. Since then both the lyrics and soaring melody have been covered by a wide variety of artists including Chris Tomlin, Matt Redman, Carmen, Michael W Smith, Sandi Patty, Don Moen and Lincoln Brewster. The most unexpected rendition occurred on 9th April 2008 when "Shout To The Lord" was the closing song on Idol Gives Back, sung by the eight remaining contestants of the American Idol talent search along with a gospel choir. The lyrics of the song had been altered changing the word "Jesus" to "Shepherd" in the first line, without the approval of Zschech or Hillsong church (which Hills had by that time been renamed). Acceding to their demands the song was performed again at the opening of the next show this time with the original lyrics. The studio version of the performance charted at number 43 on the Billboard Hot Hundred based on digital download sales alone.

Said Darlene about her worship classic, "I am honoured and overwhelmed and humbled to be part of something that causes such a response in the hearts of believers. Ultimately, it's just a song from an ordinary woman who is loved by a magnificent God."

About 30 years ago I bought a Hillsong worship VHS concert tape, led by Darlene. In it, the story of how "Shout to the Lord" came into being, CO-AUTHORED by Darlene and a male performer from Hillsong on stage with her, both explaining the co-authorship. I was NOT smoking anything when I watched that tape hundreds of times! What gives? She gets 100% of the credit?

Truly trembling and crying as I'm writing this. Truly thankful!
To God be the Honor and Glory!!! Thank you Darlene! God bless you more and more, and your loved ones.
Amen! Shout to the Lord!!! Nothing is impossible In Him!!
Our Living God--Our Life!! Worshiping Him All our Life!!